I fell in love with the musical stylings of Jakob Dylan’s band, The Wallflowers the same year everyone else did in 1996.  The album was Bringing Down the Horse and the track One Headlight and 6th Avenue Heartache were on constant play in mine and everyone else’s house from that day forward.

While, I loved Bringing Down the Horse, it wasn’t until the release of (Breach) that I realized just how talented Jakob Dylan was and this album was something to behold. 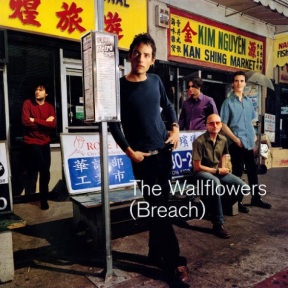 I am not sure what it was about the followup to Bringing Down the Horse but the album came across as a much tighter and more polished work overall.  It had something that really showed just how talented lead singer and songwriter Jakob Dylan really was.  With the skyward launch of their second album, it was easy to assume that it was Dylan’s name that gave him the exposure and the drive to put out such a popular effort. But with (Breach). Dylan, who’s famous father pretty much guaranteed him a genetic talent, would show that, in many ways, he was a stronger singer songwriter than freewheeling song-smith himself.

Every track on this album feels personal and introspective in a way that seems that they were written by a man who had been around for much longer than Jakob had been at the time.  The songs of heartbreak and pain feel like they come from a visceral place only those who have suffered greatly can emote.

Behind the incredible voice and deeply personal lyrics, the band seem to be on a whole other level than they were with Bringing Down the Horse.  In many ways it feels as if they new they had set a bar and realized that they needed to step out even further to meet, or even succeed the standard they had set only a few years earlier.   Succeed it they did, creating an album that is far more powerful, incredibly personal and so gorgeously produced that there is not a single track or note out of place.

To me, this is their finest work in their discography.  It is an album that evokes wonder, sorrow and joy, sometimes all within the same song.  It is one that brings back memories of good times, bad times and has me finding myself daydreaming of what could have been and what will be.  It is a magical album and one that will always remain one of my favorites.

Some Flowers Bloom Dead:    Sometimes, no matter how hard you try, the relationship just doesn’t work and that is the subject of this song.  This one reminds you that such things are acceptable and there is no reason to feel bad about it.

Babybird (hidden track):  Coupled with the last track Birdcage, Babybird is one of the most beautiful songs Jakob Dylan has ever written.  Starting with a simple beat and growing into a full song, it is a tune about how, even if you feel alone, you can always go back to a safe place, a place where you are loved.

You can sometimes find a copy here for a pretty decent price.  It is also on Spotify so either way, give it a listen.

The Wallflowers still tour to this day and, late last year I got a chance to see them live for the first time.  If you ever get a chance to do so, I highly recommend it.  Jakob and his band have it in every way and you will NOT be disappointed!