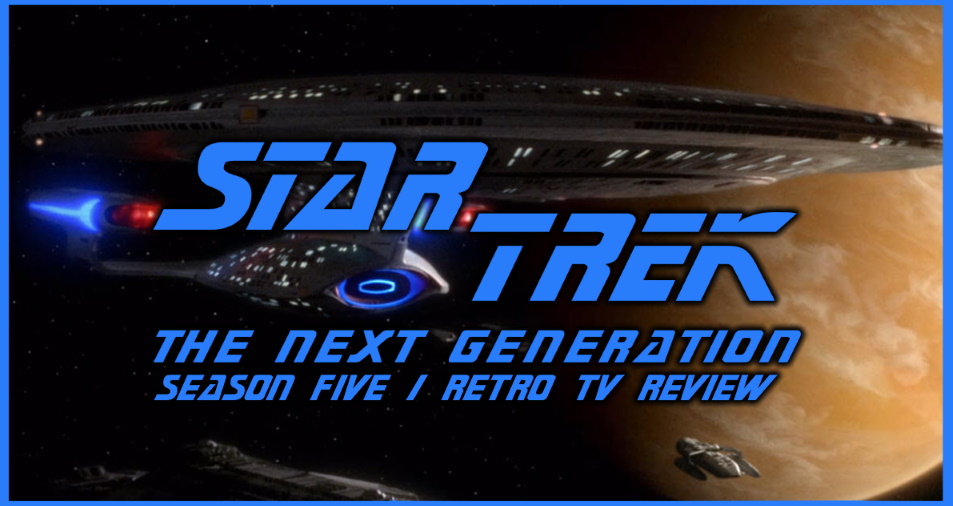 Alien Energy. Possessed Crewmen and a hostage situation.  All this and more on the episode that originally aired on February 24,1992.  This is Power Play.

An away team beams down to a moon in response to a distress call only to have their minds taken over by energy based alien species. 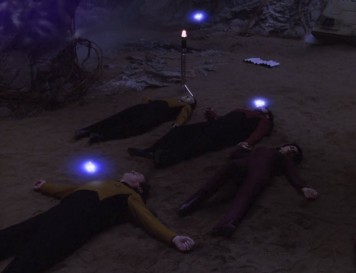 After receiving a distress call, Riker, Troi, and Data beam down to help find the ship that was sending the signal.   They are soon threatened by an incoming storm and O’Brien must beam down to assist the away team.  The storm worsens upon his arrival and, when they attempt to beam back, lightening strikes them all and, while unconscious, alien beings inhabit the bodies of Troi, Data and O’Brien.

Upon returning back to the ship, Data, O’Brien and Troi take over the bridge, after insisting that Riker takes the ship into a ‘Polar Orbit’.  Overcoming the bridge crew, the trio proceed to ten-forward where they take violently take over, subduing Worf and the rest of the security team in the process. Now facing a hostage situation, Picard must find a way to save the hostages and save the possessed crewmen.

Soon, in order to gain favor with the terrorist trio and help the injured crewmen, Picard volunteers to exchange himself with those who were wounded during the takeover of ten-Forward.  Among the hostages are Keiko O’Brien and Baby Molly.  Miles recognizes them but, under the influence of the beings, he treats them with no compassion.   Picard arrives and learns that the trio who have been taken over have been possessed by the spirits of the former crew members of the USS Essex, a ship that was lost over 150 years prior.  It appears that upon it’s crash, the crew of the USS Essex didn’t die, instead their consciousnesses were consumed by the electrical storm surrounding the moon.  Possessed-Troi indicates that she is Captain Shumar, the former Captain of the Essex, and all they wish is to be allowed to rest.  She once again insists that everything will be clear once they reach Polar orbit. 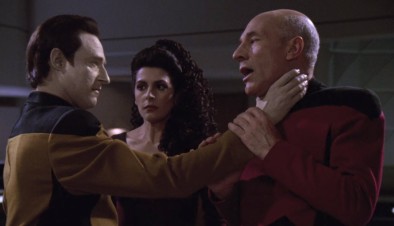 Meanwhile, the rest of the crew plot a way to render everyone in ten-forward unconscious in order to save the hostages. They soon get a chance to make their rescue attempt but miss Data in the attack.  Data immediately threatens Picard and the team is forced to abort their rescue mission.  After arriving over the polar cap, the trio soon demand that they be allowed to access the transporters.  Picard uses this opening to signal Riker that he will have an opportunity to rescue them. It is when they arrive at the cargo bay transporter pad that Riker and team make their play for Picard to act. 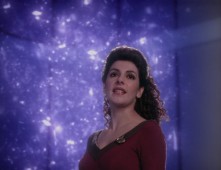 The Trio beam aboard more of the energy from the planet and Possessed Troi finally admits that they are really convicts who have been trapped on the moon for over 500 years.  They have taken over the bodies of the away team in order to free the rest of the prisoners.   Picard makes his play and traps the energy beings in a containment field.   Giving them the choice between everyone dying or returning to the surface, the beings accept defeat and return to the surface. 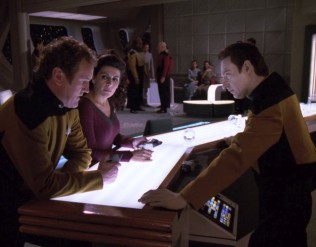 This is a solid action episode that really gives Marina Sirtis, Colm Meaney and Brent Spiner a chance to stretch out a bit.   It is always fun to play something opposite of your nature and the three of them do a terrific job being the bad guys.   Sirtis in particular is a truly believable villain and this is an early hint of her future role as the voice of  Matriarch Benezia in the video game Mass Effect.  When given a strong roll to play, she really shines and it is good to see that for her on this series.

There is a great moment with Keiko at the end where she indicates that she would die to save her child.   We see this determination many more times when Keiko and Miles move to Deep Space Nine in the following season (spoilers).   I find it pretty cool that Miles’ character has had such an amazing amount of character development for being a tertiary character on the show. 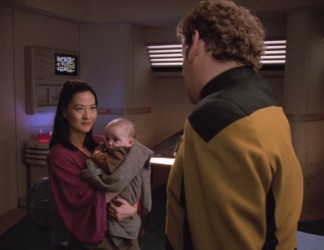 We never see nor hear about the energy prisoners nor the m class moon that they are on again.  Once can safely assume that Picard flagged the area as contaminated and off limits.

It is worth noting that had Worf and Possessed Data fought in Ten-Forward, it is likely that the Federation would likely be down one Klingon officer.  Data would have dispatched Worf in combat but not without taking a licking himself.

This is the first time we have really seen Molly O’Brien since her birth.

Thanks for reading the Retro TV Review,  I look forward to discussing the rest of the series with you, one episode at a time every Monday, Wednesday and Friday!  Next Review: Ethics