There were key movies in my life that helped to make me who I am today. Movies that I have loved from the moment the opening credit rolled and still love now. Movies I remembered fondly for one reason or another that may, or may not have stood the test of time. This blog series is about those, My guilty pleasures, my favorites, my escapes. Some were very popular, others not so much. Some of these will have some real life takeaways, others are just for fun. Today, we discuss Phantasm.

After the death of their friend, a man and his young brother come face to face with strange occurrences at a local mortuary.  Facing strange creatures, flying razor balls and the infamous Tall Man, they soon find themselves in the strange world that is Phantasm. 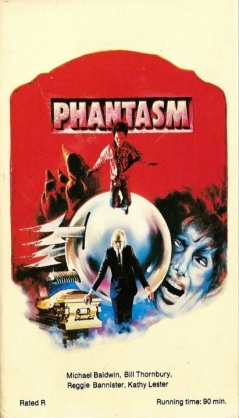 Back in the 80s horror was everything. This was they heyday for some of the greatest slasher films, greatest ghost stories and more. There was a craze and fear was its name. One film that started its rounds among my friends was an independent movie from the late 70’s known only as Phantasm.  In hushed tones we would talk about this frightening film that had a creepy Tall Man, strange monsters and an amazing spinning razor ball. This film was nightmare fuel so, of course, I had to see it. There was only one thing in my way, my parents.

Now, if you have been following my blog you will know by now that my parents had no issues with horror, in fact they had a habit of letting me watch some pretty terrifying films at a ridiculously early age. So, for them to deny me a horror film only made that movie all the more desirable. What insane fear fest were they protecting me from? Could the indeed be the most frightening film ever made? I had to know. (Not to mention it was by Don Coscarelli, the man who made Beastmaster, one of my favorite films at that age, so of course it had to be good!)

So, like any kid my age I defied my parents and managed to find a VHS copy and watched it with my friends. It was likely at a sleep over or while we were unsupervised at someone’s house but I managed to lay eyes on the film I had been dying to see.

My memories of this one are spotty at best, having only seen it the one time, but I remember being terrified of the nightmare that we had just seen. While I was terrified, I also found myself intrigued at what I had just seen. It was wildly unexplainable and, until recently, my mind had filled in the blanks making Phantasm something of a personal legend, something I had pretty much blocked out of my memory, something I was almost scared to watch again. So, seeing it was re-released in a nice new remastered edition, I had to see what it was that frightened me so much all those years ago. Queuing it up for one of my many business trips on a plane, I sat with bated breath as to what madness I would bare witness to. 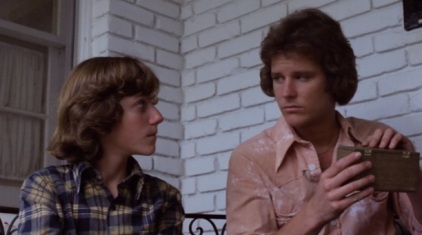 As I said earlier, It has been years since I first laid eyes on Phantasm and frankly, this is not the film I remember from that single viewing in my youth. Okay, that is not quite a true statement, I don’t remember this film being such a slow build as my memories begin and end with two things, the creepy tall guy and the flying blade ball. To me, that was the meat of the film and while that is true to some extent there was way more buildup that I remembered.

The film itself is a mixed bag of bad acting, cheap special effects, a bizzaro story and, to be honest, a pretty rad score. I honestly dont know why I thought this film was so scary as a kid. Sure there is a strange old tall guy who torments a young boy, creepy monsters that are under the old guys control and of course the flying blade balls but seriously it’s really not that scary. If anything it is a nonsensical mess that is full of cool ideas that are merged into a Frankenstein’s monster of film.  With elements straight out of Dune (the Gom Jabbar actually makes an appearance) and wildly erratic plot lines and a pretty terrible cast, this film is just a total mess but somehow remains watchable despite it’s random insanity.

All that being said, as I indicated earlier the one big standout is the music and sound design. Filled with ominous tones and genuinely nerve wracking sound effects, this synth score is one that would make John Carpenter proud. Honestly it is one of the only thing’s going for this film but somehow makes sitting through it again worth it.

Maybe it was the sound design, maybe it was the personal buildup that my parents gave it by denying my viewing of it but whatever it was this film frightened me as a kid. Watching it now I realize that it is not the film I remember, if anything this film serves as a lesson in how memories can twist and turn things making you imagine films, music and even sometimes real life events to be much better than they really were. Phantasm isnt a bad film it’s just not really a good one either with a cast of B actors, a very low budget and a plot that makes only a tiny amount of sense. While it has since become a cult classic, I really do not understand why this film is so beloved and, come to think of it, I still have no idea why my parents didn’t want me to see it.

You can get all five films in the franchise here for around $12 or the remastered first film I used for this review here for around $10.  I can’t say I recommend buying it but at the same time, if you like bad ‘B’ movies, it is totally worth your time.