This is the start of the penultimate season of Star Trek the Next Generation.   This season will bring some of the most memorable episodes and some pretty bad ones too. It all starts here with Time’s Arrow Part II, originally airing on September 21,1992.

Before we begin let’s talk about a few things.   This season marks the last season in which we will see Chief O’Brien at the transporter.  Near the end of this season, our intrepid Chief, makes his way to a whole new series entitled Deep Space Nine.  While we won’t follow his adventures yet, we might catch up to him and his family sometime in the future.

This season, even with a few dud episodes is probably the strongest season in the series.  They didn’t seem to be afraid to experiment with new ideas and concepts seeing that they had already established a pretty firm fan base.   So, sit back and enjoy, Star Trek The Next Generation Season Six.

Picard and crew must find a way to stop time traveling aliens from killing people in the past and must also find a way back home, to the future.

and now the conclusion…

We open with Samuel Clemens telling a reporter about time travelers and how he plans to expose them for their misdeeds.  As he speaks, a strange couple walk the streets with a snake head staff.  Soon, Clemmens sneaks into Data’s room with the help of bellhop Jack London  (yes the writer) and attempts to steal a part of Data’s device.  They catch him and he presses them to explain their presence in San Francisco. He insists that they are there to cause problems in the past and plans to expose them.

Riker and Doctor Crusher investigate the morgue where they discover that a large amount of dead have been drained of neural energy.  They report their findings to the rest of the away team in a room that they are staying in under the guise of a theater troupe.  They soon set a trap in the hospital and are able to identify the aliens who are killing people in the past.  They confront the aliens and prevent them from killing again.  Data detects the time disturbance and arrives just in time as the police begin their pursuit of Picard and the away team. Picard, Data and team escape and begin to analyse the alien’s cane.  After being interrupted by their landlord and managing to push her off again, Picard finally meets Guinan for her first time.

Geordi and Riker find the original construction site where they found Data’s head and discover that the cavern appears designed to concentrate triolic waves that will allow them to time travel.  As they talk, Clemmons arrives with a gun and attacks threatens them only to allow the aliens to reappear and attemot to steal back the cane. As Picard attempts to help Guinan, who was hurt, the aliens open a rift in time and one flees.  Riker and team along with Clemons, run through the portal in pursuit bringing them back to the future.  Unfortunately it appears that Data has also arrived, minus his head but holding the cane. LaForge believe he can reattach the 500 year old head they found to Data’s body.

In Ten Forward Riker begs Guinan for information as to what happened when Picard was trapped in the past with her.  She refuses to tell him anything for fear of changing the past and affecting the future.  Meanwhile Clemons and Troi tour the ship discussing the future.  They visit LaForge as he attempts to fix Data.

In the past, Picard talks with the stranded alien as it lay dying.  It explains that they need the energy humans put off and that, should they use their weapons to destroy the alien habitat, they will only amplify the Time Distortion. Picard uses an iron filing to attempt to send a message to the future to warn them not to fire on the alien habitat. 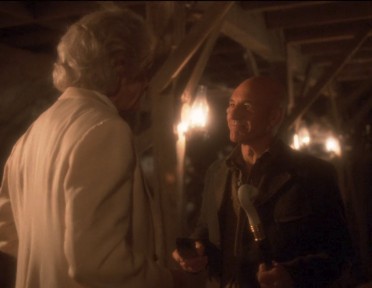 In the future, LaForge receive their message and stops Riker from destroying the alien habitat.  After discussing the situation, Riker plans to go back in time to rescue Picard.  The only problem is that only one person will be able to return from the trip.  Clemons volunteers to go as he belongs in the past.

Clemons shows up in time to save Guinan and for Picard to return to the future.  Picard arrives in the future just as Riker begins his bombardment.  O’Brien beams Picard back before the habitat is destroyed.

Although a fun story, it really doesn’t move much forward character wise but does explain things like the above.  My big problem with the story is how flippant the away team seem to be with technology while the episode makes it very clear how dangerous even knowledge of the future is.   There are many inconsistencies such as Picard installing devices on the lights at the hospital that are sure to have been discovered later, Data selling a comm badge in a poker game, not to mention them allowing Samuel Clemens to see much of the Enterprise and telling him about the future.  There are rules to time travel and we all know what happens if you break them.  However, If you can get past these frustratingly simple oversights in basic of time travel statutes, it is a pretty fun and enjoyable story.  As a finale and premiere, it is certainly the weakest of them so far and honestly, the upcoming two-parter Chain of Command would have been so much more powerful.  Trust me, you’ll see.

When Picard is replacing lights in the hospital he is doing it under the guise of Earthquake proofing. The Doctor chides him saying that there hasn’t been an earthquake in nearly 30 years.  Little to the doctors knowledge there will be one of the most catastrophic Earthquakes in San Francisco’s history only 13 years later in 1903 that will destroy 80% of the city.

As of this episode, Data has a 500 year old head.  Not entirely sure how that works but okay.

Thanks for reading the Retro TV Review,  I look forward to discussing the rest of the series with you, one episode at a time every Monday, Wednesday and Friday!  Next Review: Realm of Fear