Disagreements, food fights and baby reptiles.  All this and more in the episode that was originally broadcast on October 9,1995.  This is Parturition.

After being stranded on a hostile planet, Paris and Neelix must overcome their mutual disdain for one another to survive and help keep an infant alive.

After a rather eventful holodeck training session, Paris begins to realize that he is falling in love with Kes. Kes’ innocent involvement with Paris soon becomes a hot point between Neelix and Kes causing the two some troubles of their own.  Meanwhile, Janeway finds a planet that has been nicknamed ‘Planet Hell’ by the stellar cartography team due to it’s volatile nature.  It seems Planet Hell. which is a full day out of their way, has some much needed nutrients that could help them with the growing food crisis on board the ship.

Soon a fight erupts in the mess hall between Paris and Neelix and Janeway intervenes informing the two that they will be accompanying each other to Planet Hell in order to investigate the potential food source. The two reluctantly agree and after attending a staff meeting Kes notices that Paris will not talk to her and Neelix will not discuss the matter until he and the Lieutenant return.  This leaves Kes upset causing her to confide in the Doctor that she is confused with her feelings for both Tom and Neelix. She loves Neelix and enjoys Tom’s attention but never before realized that it could be more than just platonic. The Doctor suggests that she might not be able to do anything.

Just as the Shuttle carrying Neelix and Paris hits the atmosphere, something goes wrong causing the shuttle to crash on the surface.  Unable to transport them from the planet due to the EM field that caused the shuttle crash, Torres begins to work on way to recover their now missing crew-members.

On the surface of the planet the two continue to fight as they search for shelter.  Finding a cave to protect themselves from the trigemic vapors that is causing an allergic reaction, Paris and Neelix seal themselves in knowing that they may be on the surface for a few days.  Soon they find a trail of footprints that lead to a clutch of eggs one of which has hatched revealing a sentient reptohumanoid baby. Paris decides that they need to leave before the parents arrive but Neelix insists on remaining behind to protect the child. Paris finally gives in only for them to discover that they child needs the trigemic vapors to survive after it refuses their rations but seems intent on eating their clothing.  The problem now is that they will have to expose themselves to the poisonous vapors. 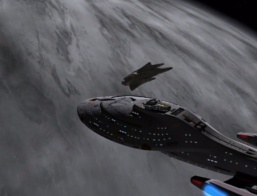 In orbit, Voyager comes face to face with an alien ship that seems intent on protecting something on the planet.  Torres realizes that they will not be able to beam their people off the planet from orbit due to the EM interference and suggests descending into the atmosphere for a better lock.  Disabling the weapons of the alien ship, Janeway takes Voyager into the atmosphere and the aliens follow.  Meanwhile, Kes worries that two people she cares for deeply could be dead and she feels guilty. Kim comforts her informing her that, with their skills, there are not two better people to be trapped together than Tom and Neelix.

On the surface Neelix and Tom take the child outside and using their hypospray as a bottle, they begin to feed the child the vapors.  As they take care of the alien baby, Neelix and Tom discuss their situation and Tom agrees to stay away from Kes out of respect for them both.  Neelix admits that he had been listening to rumors about Tom’s reputation and let it get the better of him.

Soon Voyager is in range and, as soon as the mother alien arrives, Neelix and Tom are beamed safely aboard.  On the ship they inform Kes that they have resolved their differences when Neelix offers to share his bottle or Potak Cold Fowl that he had been saving.

While this episode borrows heavily from the movie/book series Enemy Mine, it manages to do so with it’s own twist.  Instead of a cultural misunderstanding that is seen in both Enemy Mine (and it’s other inspiration Darmok), it creates a relationship issue between two crew members who are then forced to survive to care for a child.  Despite the heavily borrowed story line, this episode somehow makes it work and for that it is one of my favorite.

Early in the season we have seen the beginnings of Neelix’ distrust of Tom Paris. Tom has been known as a bit of a womanizer, even mentioning his pursuit of the Delaney Sisters from time to time, so Neelix is not wrong in his concern.  The thing that bothers me is how possessive Neelix has become of Kes almost smothering her with his determination to keep her in love with him.  While the two of them reconcile with one another, this smothering nature of Neelix will come back to haunt him furthering the rather short story that is Kes and Neelix’ relationship. 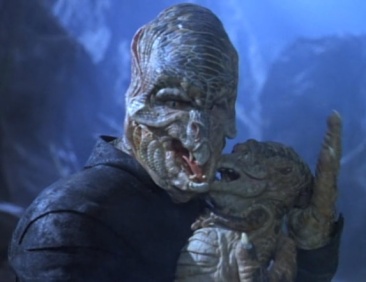 My few complaints about this episode are that not only do we never see the alien species again nor do they even attempt to make further contact, it is clear that Voyager never makes use of the protein/amino acid rich vapors on the planet.  I mean, if a replicator can use pretty much anything as a base material wouldn’t these be perfect?  It’s not like there is a finite supply and they would be starving people.   I guess we can mark this down as another fruitless 24 hour diversion from the scheduled flight plan.  Janeway better get on the ball or this crew isn’t gonna make it.

Aside from those small complaints, overall, this is a decent by the book episode that is really pretty good. Frakes does a great job directing both Ethan Philips and Patrick Duncan McNeil fully utilizing the chemistry the two of them clearly have. 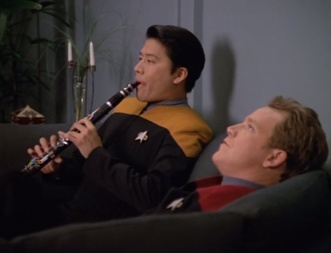 Thanks for reading the Retro TV Review,  I look forward to discussing the rest of the series with you, one episode at a time every Monday, Wednesday and Friday!  Next Review: Persistence of Vision