Oh to be young again.  So many have said that very phrase but what if you really became young suddenly, how would you react to your new found youth? Picard and others find out the hard way in the episode that originally aired on November 2, 1992. This is Rascals.

Returning from a botanic and archaeological expedition, Picard, Guinan, Keiko O’Brien and Ensign Ro return to the Enterprise only to have been regressed physically to the age of twelve years old.  Now they must figure out how to deal with life in younger bodies.

After being trapped in a strange vortex, the members of the expedition are beamed back to the ship considerably younger than before.

Despite his accident, Picard returns to the bridge and finds the crew having difficulties with current appearance.  He attempts to act as if it is business as usual but Crusher informs him that he has been compromised and asks him to relieve his command to Riker until things get better.  He reluctantly agrees and places the Commander in charge.

Ro and Guinan discuss their situation and Ro is upset that she is a ‘kid’ again.  Guinan is excited to be a child again but Ro hates every minute of it saying that she doesn’t know what to do. Meanwhile Keiko is dealing with not only being married but also being a mother while now being in the body of a twelve year old.  Miles doesn’t know how to act around his now adolescent wife and it is apparent that this is going to be awkward for them all including their child Molly.

Picard himself is having issues with his new found youth as well.  He doesn’t see himself being able to be accepted as a Captain again anytime soon, but also doesn’t want to start over again in his career.  He finds himself at a crossroads in life and begins to wonder where this will take him if a cure is not found.

As Crusher works on a cure, LaForge begins to inspect the wreckage of the shuttle that was transporting the now youthful crewmen to the ship. He discovers anomalies in the metal and, working with Crusher they begin to develop a cure.

Soon two Klingon ships decloak and begin to attack the Enterprise.  The ship is heavily damaged and soon is boarded by a contingent of Ferengis.  The Ferengi begin taking over the ship and start to transport all crewmen to the surface of a nearby planet.  The Ferengi leader informs Riker that he is claiming the Enterprise as salvage and any resistance will result in deaths.

Picard and the others, mistaken for children, are placed with the other kids.  They begin to plot how they can retake the ship with their knowledge of the Enterprise.  Using their tools at hand they begin to work out a plan. Using the other children, specifically Alexander, Picard obtains equipment from sick bay.  Soon he manages to get back to Riker by pretending to be Riker’s son.   Under the guise of Jean Luc Riker, Picard manages to get the children’s terminals turned back on with full access to the ships systems. 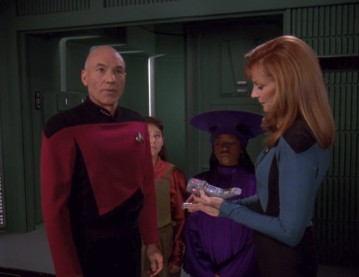 After the Daimon insists that Riker reactivate the computers and show his men how to use them, Picard begins his plan of attack.  They manage to beam the Ferengi crew to a secure location and are able to take them into custody.

Now that the Enterprise is safe, Crusher and O’Brien test their cure on the Captain. It works and soon the others are restored to their rightful ages.

When I saw that this was the next episode to review I was not looking forward to it.  I remember disliking this one greatly but, now that I am older I kind of see it in a new light.

The episode, while a little hokey in its subject matter, isn’t so much about the crewmen being kids again, it is how each of them react to the situation they are in.

For Guinan, she is thrilled to be a child again. Having lived for hundreds, if not thousands, of years, she is delighted for people to not expect anything of her and to have her responsibilities stripped from her shoulders.  To be a kid again is a great and wonderful present that she does not want to waste.

For Ro, it becomes a reminder of her time in a Cardassian Work Camp. Her childhood, as she put it was a ‘ long, depressing period in [her] life and [she] was grateful it was finally over.’  Her only desire is to get back to her work and her adult life. It is not until the end of the episode when she realizes that being young again isn’t so bad. 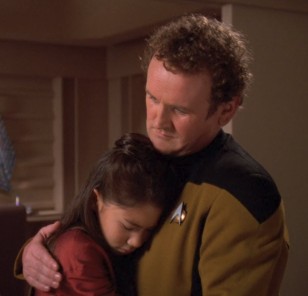 Keiko is facing an even more difficult situation.  She is a mother and a wife trapped in the body of a twelve year old girl.  She is worried that this event will destroy her marriage with Miles and ruin her relationship with her daughter Molly.  Being a kid again is possibly the worst thing to possibly happen to her.

Finally there is Picard.  Picard’s is unique as, initially, he attempts to act as if nothing is out of the ordinary until he realizes that, although mentally still himself, his physical appearance will undermine his position as the Captain.  This also means that, should he remain in the younger body, his career as a Starfleet officer is all but over and he may be forced to either start over or retire all together.  In some ways he begins to see this as a second chance to be someone new but, in the end, he knows that he must be the Captain of the Enterprise.

It is an episode that is all about perspective and how it changes with age, for that, it is a solid entry into the season.

A keen eye will recognize young Picard played by the same actor who played his nephew Rene in the episode Family.

This episode was directed by Adam Nimoy, son of Spock himself, Leonard Nimoy.

Thanks for reading the Retro TV Review,  I look forward to discussing the rest of the series with you, one episode at a time every Monday, Wednesday and Friday!  Next Review: A Fistful of Datas