Today we discuss The Return of the Living Dead.

Directed by Dan O’bannon (Alien, Aliens) this film spins out of the classic 1968 film Night of the Living Dead, making Return of the Living dead the first ‘Living Dead’ sequel to the classic film (more on that later).  Portraying the original film as having been a ‘true story’ we discover that the actual events were buried by the government.  Unfortunatly, the original Zombies are discovered in a medical supply facility and inadvertently unleashed on the unsuspecting populous of Louisville, Kentucky.

Starring Clu Gulager, James Karen, Thom Matthews, Don Calfa and several others, Return of the Living Dead is the perfect 80’s marriage of Horror and Comedy. 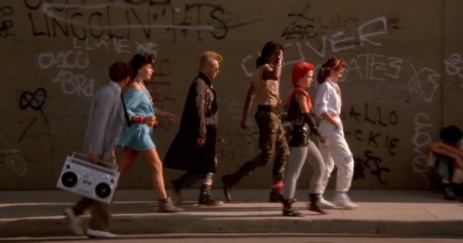 When this film came out, it was one of many that we ended up renting on VHS.  My father, having been a fan of the original Night of the Living Dead and the ever classic Dawn of the Dead, made sure that this film was brought into our home for us to enjoy the machinations of the Zombie apocalypse.  The thing is, this was not quite what he was expecting after watching the classic Romero films.

Made as more of a Horror/Comedy, Return of the Living Dead would soon be recognized as an instant classic to kids of my generation.  With memorable moments, monsters and characters, this was a film that everyone wanted to see and, much like any horror film of the 80’s, many kids my age were forbidden from it.  Luckily, in my household, horror was a pretty acceptable form of entertainment.

To me, this is a straight out classic horror/comedy flick.  While it will never compare to the straight horror achievements of films like An American Werewolf in London, it is really a fun film that fully embraces it’s campy nature while not avoiding it’s horror roots.

While the plot doesn’t really make sense if you try to analyse it too much, (I mean, why would a person keep dangerous military canisters in his warehouse basement to begin with?) I simply adore the clear fun that everyone in the film appear to be having.  Interestingly, while the film is rather silly it did provide a major contribution to the Zombie mythos, namely, the now well known fact that Zombies eat brains.  Prior to this film, Zombies were simply flesh eating creatures but there was never a specific organ they were after.  Return of the Living Dead is primarily responsible for this now well known trope causing a major rift in the Zombie fandom for years to come.  Additionally, this film give a definitive reason as to why Zombies desire Brains providing a fairly emotional moment that is frankly pretty sad moment in the story.  I wont go into detail in case you haven’t seen this one but the reason is rather heartbreaking to be honest.

Filled with absolutely enjoyable moments and truly inspired special effects, Return of the Living Dead is one of the best horror/comedy films of it’s time.  This is one that not only has a fun story but also has some pretty clever subplots and character back stories including subtle hint to some disgruntled employees and even a mortician who might be an escaped Nazi. 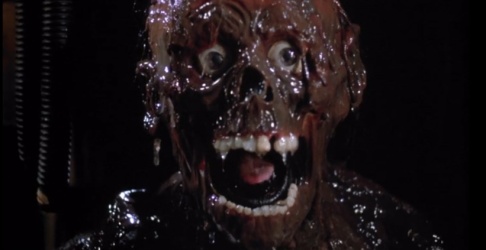 Overall, if you like campy fun horror films from the 80’s this is one you should watch.  Don’t go in expecting a serious horror film in any way, To say this is a scary film might be going to the extreme but boy it is fun.  From a group of stereotypical 80’s punkers to even the classic ‘military intervention’ at the end, this is a film that set the bar for films like House and Army of Darkness.  Plus you get the rather awesome Tarman Zombie that has since become an icon in his own right!

You can get this one on Bluray at a pretty reasonable price these days.  It is also available on streaming pretty much everywhere so do yourself a favor and give it a go.  Plus, it managed to spin off two more direct sequels (and two others that don’t quite fit) that we will be sure to talk about in the coming weeks.