The return of an old foe and the beginning of a dangerous ability.  Originally broadcast on November 13, 1995 this is Cold Fire.

The crew discover they might be able to contact the Caretaker’s mate and, in the process, discover a colony of Ocampa who are more than they seem. 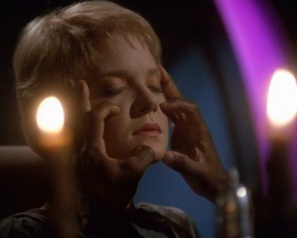 Kes and Tuvok continue her mental training in an attempt to develop her telepathic skills. She is soon able to hear the thoughts of Neelix across the ship and, although she has emotional outbursts, Tuvok acknowledges that she is doing well.  Returning to Sickbay she and the Doctor are shocked when the remains of the Caretaker begin emitting a loud sound.

Rushing to sickbay, Janeway and Torres scan the Caretaker’s remains only to confirm that it is still quite dead. Janeway surmises that the remains may be reacting to a nearby sporocystian life form and the crew decide to use the remains as a way to track the female caretaker.  Receiving another signal, the crew use it only to find a space station that looks similar to the one the Caretaker had once used. Hailing the station they are greeted by a few warning shots and a message from an Ocampan man who insists that Voyager move away from the station.

Janeway asks Kes to contact the Ocampan again and this time gets a much better response although it seems Voyager has gained a bit of infamy in the quadrant. After visiting the ship, Tanis indicates that Voyager is known as a ship of destruction and, when soon Tanis asks Kes (through his mind) to meet him privately.  Janeway allows them to have privacy where Kes learns that they have been taken care of by the Female Caretaker, Suspiria, and have been able to grow their powers and even extend their lifespans unlike the Caretaker who only maintained the status quo. Taking him to the hydroponics bay he shows her the extent of his powers by causing all of her plants to bloom.  Kes assures Tanis that they are not a threat and returns to Janeway who, while happy for Kes, advises caution.   On the station, Tanis is ordered by Suspiria to ‘bring her Voyager’.

Tanis joins the crew for dinner where they learn more about the Ocampans and Suspiria.  Tanis promises to introduce the crew to Suspiria and, to everyone’s surprise, invites Kes to remain behind. Later, Tuvok and The Doctor begin to develop a toxin to use on Suspiria should she prove violent. As they work on the Toxin, Tanis shows Kes how to use her powers to boil water prompting Neelix to agree to remain behind with Kes should she choose to do so. 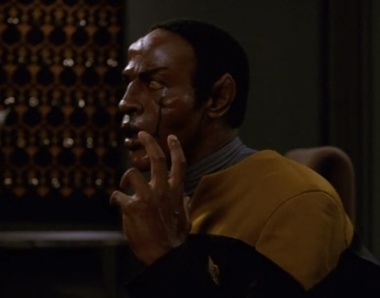 Heading to a meeting-place Tanis indicated for Voyager to meet Suspiria, Kes chooses to show Tuvok her newfound abilities. Attempting to boil water with her mind she inadvertently boils Tuvok’s blood nearly killing him in the process. Rushing to sickbay, Tuvok is saved and is open to continuing Kes’ training as long as she takes this event as a lesson herself.

Although she nearly killed her crew-mate, Kes continues training with Tanis further exploring her mental abilities.  Soon she uses her powers to incinerate the plants in the hydroponics bay much to her dismay. Tanis soon encourages her to leave with him to be embraced by Suspiria and grow so that she can join their master in Exosia to exist in a layer of pure thought and energy.  Kes promises to consider his offer. 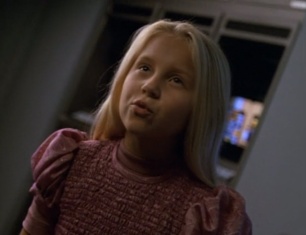 Soon Suspiria arrives in the form of a little girl and, believing that Voyager killed her mate, begins her revenge on the crew.  As Suspiria attacks Janeway and Tanis tries to convince Kes to leave with him but she rejects his offer and the two battle after Neelix is hurt by the Ocampan man. The battle takes its toll on Suspiria who, in a weakened state, is injected with the toxin.  Afterward Janeway allows both Suspiria and Tanis to leave while Kes chooses to remain behind.

In the end Kes has lost much of the power she had gained before meeting Tanis and is back training with Tuvok in his quarters.  She regrets giving into her impulses and is assured that everyone has them she just need to learn to control them.

This is a hard one to review seeing that we already know where Kes’ journey goes from here.  Without knowing what is to come this episode is a solid entry that really gives us some incredible setup for an underused character while also finally addressing the ‘easy out’ of finding another ‘Caretaker’ to get the crew home. In many ways this would have been the perfect ending to season one giving a very careful balance to the pilot episode.

The story itself is a solid one. Kes finding and seeing her true potential echoes that of Luke Skywalker’s journey toward the Dark Side.  She has a darkness in her that is waiting to be unleashed and it is only through her guidance from Tuvok and love of Neelix that she is able to find a control. It is this struggle that makes Kes all the more interesting when you also the kindness in her while working with the Doctor.

In the end, Knowing what I know about Kes and her journey on the series I see this episode in a very different light than I did when it first aired.  For the newcomer to the series this is a very exciting episode that promises so much to come for the character of Kes.  The idea of having what is practically Jean Grey on the ship is a really cool idea and makes me wish that Kes’ character got a chance to grow beyond her short lifespan and become something so much more.  Sadly this episode is little more than false promises and the fact that her character leaves the show makes this a bittersweet entry at best.

All that aside, this is an intense episode that really gave actor Jennifer Lien a chance to show her abilities.  She was fantastic in her role making me sad that she never really did much more after Voyager.

Thanks for reading the Retro TV Review,  I look forward to discussing the rest of the series with you, one episode at a time every Monday, Wednesday and Friday!  Next Review: Maneuvers