The holodeck once again is used as a storytelling tool in today’s entry.  However this time, there is a twist.   Originally airing on November 9,1992 this is A Fistful of Datas.

Things don’t work out as planned when Data and Geordi initiate an experimental program to allow Data’s positronic net to act as a systems backup.  Worf, Alexander and Troi become trapped in the holodeck with versions of Data posing a real threat.

The Enterprise crew finds themselves with time on their hands and they each begin to do things they enjoy.   Picard in particular is having trouble relaxing as he keeps getting distracted by his crewmen.  When Worf arrives, Picard insists that his Chief of Security take the time to enjoy himself and enjoy his free time. It turns out that Worf was trying to find busy work to keep from having to go to the holodeck with his son Alexander.

As Worf and Alexander explore the Ancient West in the holodeck, Data is connected to the computer systems. In the holodeck, Worf ruins the experience by immediately defeating the outlaw Eli Hollander Klingon Style.  Alexander is upset and increases the difficulty of the program to provide them a greater challenge. Wof finds that the new version of the program is exhilarating and, just when things are getting intense, a stranger arrives…

Data and Geordi continue to work on their project when Data experiences a power surge.  He then, mysteriously holsters his tricorder like a pistol for no apparent reason.

In the holodeck they continue their adventure. Deanna Troi has arrived as Durango, the Mysterious Stranger, and they have captured Eli.  He informs them that his daddy is coming to free him and things will not turn out well.

Around the ship people begin having issues with the ships systems.  Picard finds his music has been changed and Crusher finds that the play she is working on has been replaced by Data’s poetry.  What turns out even worse is that a version of Data himself has appeared in the holodeck western with him in the role of  Frank Hollander.  To make matters worse, the holodeck controls are not functioning and Worf and Troi are unaware of the trouble.

Frank Hollander arrives to confront Sheriff Worf and offers Worf his son in exchange for Frank’s son Eli.   Worf initially believes Frank to actually be Commander Data but soon discovers that something is seriously wrong. He returns to Troi and they discover that, not only can they not escape, but they can’t contact anyone outside of the holodeck. Soon, other characters begin to take on Data’s form, including their prisoner Eli.

Data and Geordi discover that Data’s systems have infiltrated the ship and have begun replacing non-critical systems with Data’s information.   Food replicators are producing cat food, music and plays have been replaced with Data’s selection and even Data himself is starting to show signs of being corrupted by something himself. 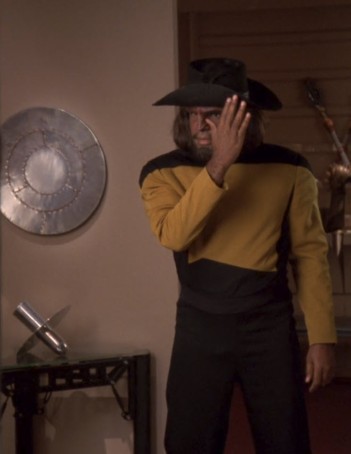 In the Holodeck Troi notices that Data/Eli exhibits the real commander Data’s abilities.  This is concerning as they will be facing multiple villains with all of Data’s skills and intelligence in an upcoming fight. Data/Frank arrives and they make a deal for a prisoner exchange.  Knowing that the Hollanders will betray them, Worf devises a plan to prevent his death.  Before long, all of the characters in the simulation have been replaced by Data and the fight becomes a challenge.  After everything, Worf is triumphant and saves  Alexander.  Later that evening, Worf and Alexander agree that one day the town of Deadwood may face danger again and, when it does, they will be there to save the day.

All in all, this is a fun episode that give the actors a chance to enjoy themselves.  Brent Spiner does a fantastic job portraying the multiple characters throughout the episode, so much in fact that you almost forget that he is playing all of the villains at one point. He even gets a chance to play around with Data’s voice which is quite delightful.

The real story here is one of Worf and Alexander.   Worf is still having issues with fatherhood and is very reluctant to play or engage in activities with his son.  His son idolizes him and wants nothing more than attention from the only other Klingon he knows. It is a difficult relationship for them both that will not be fully resolved until much much later in the story, which unfortunately will not be even on this series.

We also see Alexander’s connection with counselor Troi a bit here as she has been one of the few people on board who has taken an interest in his life.  This has implications further down the road (nothing sinister mind you) with a certain relationship that develops a little more over time.

Best line in the episode:  One of the holodeck characters asks Worf, ‘ Were you born that way, or did your momma marry an armadillo?’

We get a great moment at the end where Worf must…embrace the woman that loves him in the holodeck…only that woman has been replaced as well.

This is the first episode we see Geordi attempting to grow a beard.  This isn’t the last we see of it.

We see the return of the Ressikan flute, implying that Picards experience in Inner Light had a profound effect on him.

Thanks for reading the Retro TV Review,  I look forward to discussing the rest of the series with you, one episode at a time every Monday, Wednesday and Friday!  Next Review: The Quality of Life