When I was a kid I watched a lot of movies, I still do, but as a kid television and movies were a major part of my life. They were an escape from my life. My childhood wasn’t great, in fact like many of us, it was downright miserable at times. Movies and television allowed me to escape that. It allowed me to go places outside of my reality. (Books, music and Video Games would later end up in that mix but that’s not what this is about.)

While Today’s Key Movie is not one from my youth it does fit in to the recent reviews I have been posting. This is the latest entry in the Critters films and so, I had to add it in even though I had never seen it before now.

The story is fairly straight forward, Critters find their way to Earth and begin the mission of literally eating everything in sight there is one big difference this time. This time there is a ‘good’ Critter named Bianca and a mysterious woman named Aunt Dee played by the wonderful Dee Wallace Stone (you might recognize her as the mom from the first film… 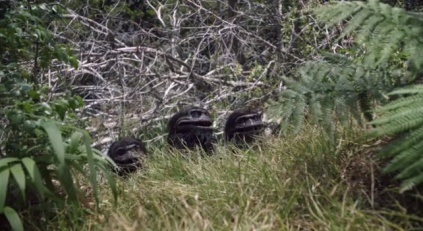 Even though the series hasn’t always been at it’s best, Critters has held a warm place in my heart since I first saw the Crites in the original film some 30+ years ago. So when a new Critters feature film was announced (ignoring the strange and somewhat out of place television series), I was all in.

The story itself is a basic one, a girl babysits a group of kids only to encounter a ‘good’ Crite as the rest of the Crites go on a rampage across the small town they live in. Meanwhile, the mysterious ‘Aunt Dee’ arrives to help take out the menace that is the Critters. Honestly, the premise is pretty solid when you look at it at face value but does it work?

In recent years it has become popular to make a sequel to a horror franchise that ignores the lame sequels and tries to give us the sequel we deserve. It was wildly successful with Halloween and attempted in Terminator Dark Fate so, it only makes sense for other beloved franchises to make the attempt as well.

Critters Attack does it’s best to revisit it’s roots but overall it is an odd duck. Doing a solid job ignoring the strange quasi-futuristic space adventure of the previous entry, Critters returns to the ‘attack on a small town’ plot that worked best for them with parts 1 and 2. There are some aspects of the film that doesn’t quite work but lets start with the positive first. 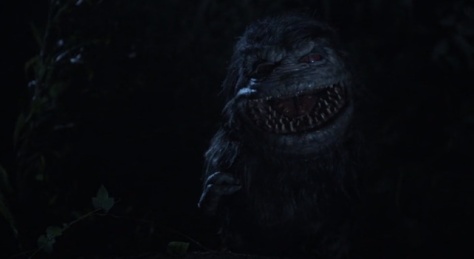 The critter design in this one is perfect. Not only did they seemingly perfect the design, making them far more realistic than ever before, I was also impressed by the look of Bianca the ‘good’ Crite. The first time I saw the black and white female Critter in the trailers, I have to be honest, I really didn’t think it looked great. However, in the context of the film, Bianca actually works well. The cool thing is that the critter puppets are on par with the work of the Jim Henson Company and, even though they had not been involved with the previous entries, the quality was so good I was somewhat surprised that they had nothing to do with this film. 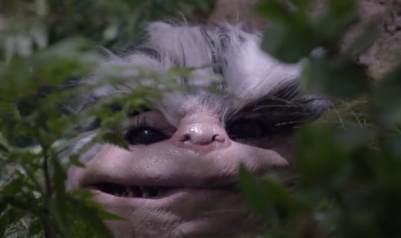 The story itself is a pretty by-the-books small town invasion story and, even though we tend to expect deeper plots these days, this one works for a Critters film. Even with the mostly B and C list cast, the film works in it’s attempt to revitalize the franchise giving us a fairly safe entry not unlike what Abrahms did with The Force Awakens. Critters Attack is a return to form and, while not as ‘campy fun’ as the original, it is an enjoyable feast of monster goodness. There is only one problem, while the film tells a good tale it completely wastes it’s biggest asset, Dee Wallace Stone. 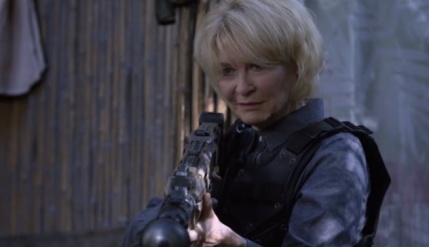 When I heard that Stone had returned to the franchise, I was pretty excited. I thought that the filmmakers had managed to make a cool but very unlikely connection to the original film in the form of the original hero’s mother, Helen Brown. In a way it would make sense, having had her life all but destroyed by the evil Crites, the mother of Brad Brown could have naturally become a bounty hunter in her attempt to prevent such a thing from happening again. Honestly, this was a much better premise than the strange Bounty Hunting adventures of Charlie in parts Three and Four but, for some reason, the film makers chose to just make her ‘Aunt Dee’ with absolutely no connection to the original film at all. In fact, Stone is barely even in the film and honestly could have been cut out of it with little to no affect on the plot. Maybe if another film is made we will learn who Aunt Dee really is, maybe they were setting up a future plot line? Who knows, but honestly, it was rather disappointing to not see her in a larger role. 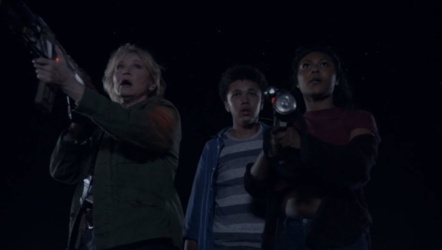 All that being said, this film does give us a new pair of protagonists in the form of Brother/Sister team Drea and Philip (played by Tashina Washington and Jaeden Noel) and they do a great job in their roles. To be frank, had it just been about their adventure with no connection to the past series other than the Crites, this would have been a perfect entry to the franchise. I hope this isn’t the last we see of these two young actors, they were good and certainly deserve to come back for another bite.

All in all, This is a pretty fun entry to the Critters Franchise and a nice breath of fresh air after the very clunky previous two. Hopefully we get more from this franchise and it seems they are on the right track.

Since this was a ‘made for tv’ sequel it may be difficult to find it on disc but it is available digitally via Vudu and other streaming services. It’s good and if you dig Critters, I think you will dig this one.

Till next time, here is the trailer: