The past comes back to haunt Torres and the crew of Voyager in the episode that originally aired on February 12,1996.  This is Dreadnought.

B’Elanna Torres comes face to face with a weapon from her past as her previous work now threatens an innocent planet in the Delta Quadrant. 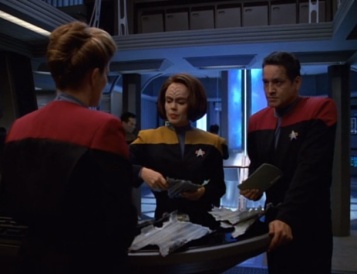 As The Doctor and Kes propose names for Ensign Wildman’s unborn child, Janeway and crew discover that a Cardassian weapon is being used in the Delta Quadrant. Fearing that Seska is involved somehow, Janeway is shocked when Torres admits that this weapon is one that she was involved with.

Torres briefs the crew to explain that they are facing a Cardassian missile now known as The Dreadnought which Torres once reprogrammed to use against those that originally made it.  It seems that the missile was also swept up by the Caretaker’s array and has since resumed it’s mission despite being light-years from Cardassian Space. Torres is certain that she can disarm the missile if Voyager can get her inside of it.

Working on a strategy with Paris, B’Elanna and Tom begin to discuss the situation.  It seems that Torres wasn’t completely honest about the missile as she reprogrammed it without permission from her Captain at the time, Chakotay.  Paris uses this opportunity to discuss his problems with the Commander and Tom’s feelings that he is really not fitting in with the Voyager crew as he once believed he could.

As the crew deal with the dangers of The Dreadnought, Jonas makes another call to the Kazon to report the on-goings aboard Voyager but finds them unwilling to talk this time around.

After discovering that the Dreadnought is heading toward a populated planet, Janeway contacts the planet and immediately meets with the same resistance they have seen before.  It seems the Kazon have been spreading miss-information about Voyager once again and their negative reputation has proceeded them yet again.  Janeway manages to mostly convince the First Minister of their veritas with him indicating that he will be watching this carefully.

Finally getting near the missile, B’Elanna beams aboard after getting it to accept her access codes. After much effort, Torres manages to convince the Dreadnought that it is no longer in the Alpha Quadrant but the armed probe continues on it’s course.  After some time, B’Elanna convinces Dreadnought that it is indeed no longer on it’s original mission and shuts it down.  Returning to the ship they are shocked when The Dreadnought re-initializes and jumps to warp nine, continuing on it’s original heading.

Chasing The Dreadnought Voyager now has only 51 hours to intercept and destroy the deadly probe. Photon torpedoes prove themselves ineffective and Voyager is soon contacted by Dreadnought only to learn that the probe faked it’s shutdown due to it believing that B’Elanna herself had been compromised. B’Elanna suggests using a tachyon beam to disable the probe but, using Voyager’s offensive attack against it, the probe manages to disable Voyager’s engines as The Dreadnought resumes it’s course.

Janeway soon learns that First Minister Kellan has decided to deploy their fleet even though they are no match for Dreadnought.  With time ticking down, Voyager manages to get back on course and B’Elanna once again beams aboard the Dreadnought only to find herself locked out of all of it’s systems. Soon it becomes apparent that the Rakosan fleet is the perfect distraction and Torres begins using this as an advantage. Soon Dreadnought realizes that Torres is attempting to destroy it and determines that B’Elanna has changed her loyalties.  In retaliation the Dreadnought cuts life support in order to encourage the Klingon engineer to leave but finds that she is determined to prevent it from completing it’s task.

With no other option, Janeway contacts Kellan and informs him that she is planning to place Voyager in the path of Dreadnought in order to save his planet.  Impressed, he acknowledges that the crew has made an ally in them despite the chance of it being a short alliance.

Torres finally reactivates the original Cardassian system causing the ship to begin fighting itself allowing her to access the ships reactor core and set off a detonation prior to it’s arrival at it’s target. Evacuating Voyager in anticipation of their imminent destruction, Janeway is pleased that Torres has managed to destroy the Dreadnought moments before the ship self destructs.  They soon begin collecting the escape pods that have left the ship. 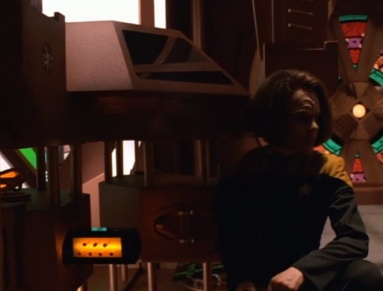 Once again we get a great Torres-centric episode really focusing not only on her skills as an engineer but also showing us how much she has grown since serving on Voyager.  We get a chance to see some of the work B’Elanna conducted prior to her time on the ship and the ramifications of said work.  In a way this episode personifies the ‘past coming back to haunt you’ trope making one of B’Elanna’s past efforts nearly destroy not only Voyager but an entire civilization as well. Roxann Dawson does an incredible job carrying the episode showing that she really has what it takes to take the reigns if needed. 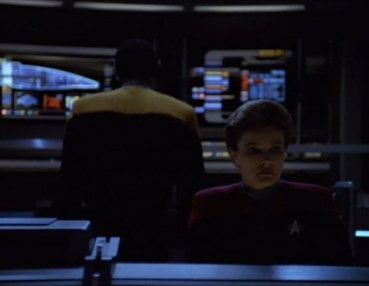 While this episode is indeed a B’Elanna focused episode, the overall story really isn’t about her. Throughout this season we have been learning that the Kazon are spreading lies and rumors about the evil starship named Voyager.  This issue has almost bec\ome rampant with nearly every port of call citing their apprehension concerning this new powerful ship of war.  The primary purpose of this episode is to help Voyager reestablish it’s reputation of being a peaceful ship and one that poses no harm toward the Delta Quadrant or it’s people. This restoration of their reputation will be valuable down the line and the writers of the series were pretty clever in their continued efforts to show how Voyager must gain the trust of the sector they are in while traveling through it.

Overall, a solid entry that not only gives some additional insight into B’Elanna’s character but the overall character of Voyager itself.  We see here that Janeway is determined to maintain their fierce loyalty to Federation principles, even if it means destroying the ship itself.

Thanks for reading the Retro TV Review,  I look forward to discussing the rest of the series with you, one episode at a time every Monday, Wednesday and Friday!  Next Review: Death Wish