It’s a Wonderful Life.  Every television series has it’s version of the movie. The age old, what would the world be like without me trope only this time, Star Trek does it in it’s own fashion.  Having originally aired on  February 15,1993, this is Tapestry.

Picard is undergoing cardiac arrest and, in his death, he encounters someone he never expected to see in the afterlife,  Q. 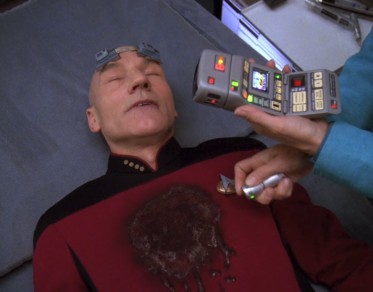 Picard is dead.  Having been shot in the chest, his artificial heart is causing him to not be able to be recovered.  As he dies, he finds himself in a completely white area and is greeted by none other than Q himself who casually informs the Captain that Picard is indeed dead.

At first Picard refuses to believe that the afterlife is run by Q.  Q proves his point by showing Picard a vision of his own father and many others from his past.  Q indicates that Picard’s artificial heart is the real cause of his Jean Luc’s death.  He then replays the events in which Picard gained his artificial heart, an ill fated fight with some Nausicaans.  Picard confirms that this moment was a turning point in his life, and he would be happy to have a second chance to do it all over again. Q obliges.

Picard finds himself back in the past with his friends.  Q arrives and informs Picard that he is 21 again and fresh out of the Academy.  Picard now has a second chance at life to alter the things Picard regrets.  Picard is shocked and refuses to alter history to which Q responds that Picard really isn’t all that important.   Q promises that nothing in history will change if Picard chooses to play it safe in his own past as this is about Picard and no one else.   Picard chooses to play along, interested in seeing where this goes. 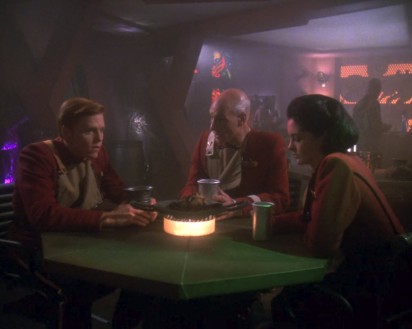 Picard goes on a date with Penny only to find himself rebuked.  He tells Q that, at that age, Jean Luc was a puerile adolescent youth who didn’t know better. While at the bar, a Nausicaan confronts his friend asks to play Dom-Jot with them.  Knowing the outcome, Picard warns his friend to not play and he is ignored.  It turns out that the Nausicaans were cheating and his friend wanted revenge.  In the attempt, Picard and his friends offend the Nausicaan which results in Picard being stabbed.  Events play out in the same manner only this time Picard refuses to play along. Picard tries to dissuade his friend from revenge only for the young officer to attempt

it on his own.

Picard continues to change his past, stopping his friend from rigging the dom-jot table, having a relationship with a friend he secretly loved and ultimately walking away from the fight that caused him to get an artificial heart.

Picard awakes in the present only he is now a Lt Junior Grade aboard the Enterprise.  He has not had a successful career and haven’t amounted of much of anything.  Q points out, however, that he still has his real heart and for that, he should be grateful.   He soon learns that he has no real future in Starfleet.  He discovers from Riker and Troi that Picard has been unwilling to take risks in the past and isn’t someone who is even close to being on track for command.   Upset at the changes, Picard calls for Q to return him to his moment of death as this is not the life he wants to live.

After discussing the matter with Q, Picard is returned to the moment of the fight and is once again stabbed in the back.  At that moment he awakens on the operating table and is informed by Beverly that he will be just fine. 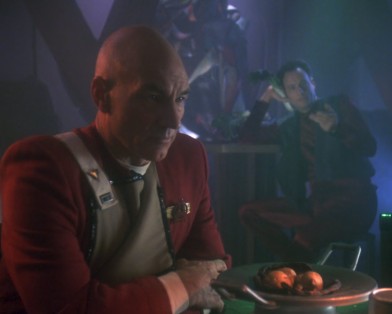 This is a solid entry in the history of Picard.  With backstory mentioned once before, we finally get to see the events that lead to Picard getting his artificial heart.   It is a great tale that really establishes some much needed history for our intrepid Captain.

The key takeaway in this episode is about regret and taking risks.  All of us have some regret in life.  Whether that regret is about a job not taken or a love interest not pursued, we all have moments in our lives that haunt us or at least echo back from time to time.   However, much like the tapestry in the title, everyone’s lives are a carefully woven piece and if even one thread is removed their entire lives could wind up completely different.  Experiences, good or bad, could be entirely erased and even relationships completely eliminated.  This is not only the danger in travelling to one’s past but also insulates the danger in not living your life to the fullest in the present.

Sometimes a risk worth taking is the very thing you should do to further your career, your love life or even just your path overall.  Sometimes not taking a path will have serious ramifications that you could never predict in the distant future.   It is certainly a daunting thought that simple events such as accepting a job or going on a date can change your life and over-analysis can cause people to freeze with indecision.  The lesson here is simple, live life to its fullest. Accept risk when it comes and meet your choices head on.  We only live once and it is better to live a life fulfilled than to face one of regret 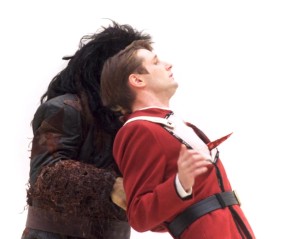 We discover that Picard wasn’t always bald, in fact he had a serious head of hair!

We also discover that  Picard was a bit of a ladies man, having multiple dates lined up on the same night.  He was also into older women it seems.

We are never entirely sure if Q was really there or it was just all a part of Picard’s imagination.

There is a bit of an inconsistency between this episode and a photo in Star Trek Nemesis depicting young Picard as bald. Someone didn’t do their research it seems.

Thanks for reading the Retro TV Review,  I look forward to discussing the rest of the series with you, one episode at a time every Monday, Wednesday and Friday!  Next Review: Birthright Part I