Well, this is another fine mess you’ve gotten us into Chakotay….at least that is what Janeway was probably thinking when the entire crew finds themselves stranded on an inhospitable planet with the Kazon in control of Voyager.  Anyhow, Thanks to Chakotay’s maybe baby, Originally broadcast on September 4, 1996, this is Basics Part II.

Thanks to the completely unnecessary and ill-advised  rescue attempt for Seska and her child, the crew of Voyager find themselves sans ship and on an inhospitable planet.  Meanwhile, Paris, Suder and The Doctor attempt to take back Voyager from the Kazon.

Okay, this is the season premiere but seriously, it is exactly how you think it is going to pan out.  I am not going to bother giving a full run down of events as I usually do because man it is just silly that they were in this predicament to start with.  Instead we are going to do hit the big beats and then discuss the episode below.  Cool? Cool. 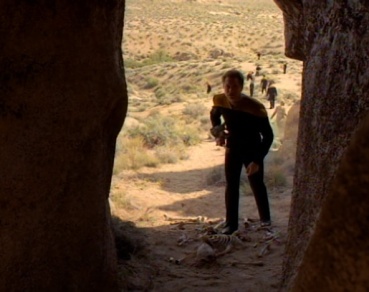 eh….I mean it’s not a bad resolution to a story that shouldn’t have happened to begin with but it’s hard to enjoy knowing how ridiculous the entire situation was.  Yeah, sure, it actually establishes that Seska believed she was pregnant with Chakotay’s kid but, if it wasn’t actually his kid, why did Chakotay’s ‘dream dad’ tell him it was.  Ohhhh yeah, that was all in his head and wasn’t actually a ‘vision’. Or it was a vision but not a legit one, personally, I think it was wishful thinking on Chakotay’s part. 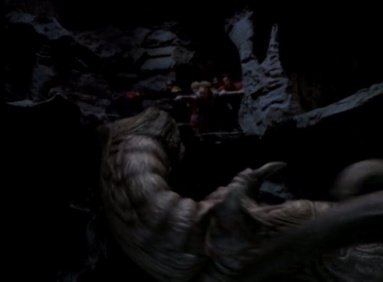 To say it’s a bad episode isn’t fair though as it was very well produced and really took the characters out of their element.  For the first time the crew of Voyager faces the real possibility of not being able to make it back home.  While they don’t really have time to explore the emotional impact of this revelation, it is something that is a real thing the crew have to be facing.  Had they been stuck there any longer, I honestly don’t think they would have survived long even considering the ‘survival training’ they have.  I mean seriously, thus crew was pretty doomed until Paris showed up in the end. Sure they conveniently made friends with the natives but there was no way everyone would have survived…heck they lost two crew-members day one.

One serious standout in the episode is that of Brad Dourif in the role of Lon Suder.  There was no way they could have a serial killer remain on board so for this character to have a rather significant part in the recapture of Voyager was, to me, the perfect way for them to close his story-line.  Dourif, as always, is one of the best and it was awesome seeing him on the show in such a dark yet heroic role. While it’s a shame he could not join the crew as a regular, I can’t think of a more fitting end.

One big issue I have with this issue, besides it being the results of a horrible plot line, is that the Kazon run Voyager with ease.  For a species who can’t seem to run a stolen replicator without killing themselves, how the heck are they able to operate Voyager without blowing it up?  No, Seska being on board isn’t a good reason, there is no way she could teach an entire crew every aspect of how to run the ship and I HIGHLY doubt that operating a Kazon ship is anywhere near the same.  Plus, when Cullah realizes that he is going to lose Voyager, why did he not take some of the tech with him upon his escape? I mean, that was what they wanted to begin with right? Federation Technology?  I am shocked he didn’t have a team of Kazon collecting supplies and weapons on one of their ships in order to further take over the quadrant.

Oh…and one more thing.  How the heck is Janeway going to justify the significant damage they did to a prewarp civilization?  They seriously changed the course of this planets evolution by actively interacting with the clearly Neanderthal-like people.  There is no way that Voyager is not now part of this groups myths and legends with the ship itself being touted as some large beast that abandoned and then claimed it’s children who ‘saved’ a young girl from certain death.  In fact, that kid that was saved will probably be worshiped now causing a complete cultural shift for these people.  Oy…I would hate to see the report on this situation.

Overall, this premiere is essentially a contrived escape switch for a story that clearly had no planned ending.  Sure they do a decent job in getting Voyager back to Janeway and her crew but in reality, the Federation crew would still be stuck on that planet mating with the local natives and starting a new civilization.  Well, those that didn’t get eaten by the local wildlife that is.

Thanks for reading the Retro TV Review,  I look forward to discussing the rest of the series with you, one episode at a time every Monday, Wednesday and Friday!  Next Review: Flashback