Sometimes memories can serve to remind us what we have tried so hard to forget. Originally broadcast on October 9, 1996, this is Remember.

Torres finds herself the recipient of dark memories as Voyager hosts a delegation who are also heading home. 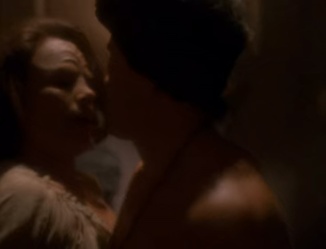 After picking up a small delegation from an Enaran Colony, B’Elanna and Harry work with them to install energy conserving technology that was given to Voyager in exchange for transport.  That night, B’Elanna has a vivid dream involving an Enaran named Datan Alaris.  Oversleeping, she finds herself being wakened by her first officer for her next shift.  Embarrassed, she confides in Chakotay why she overslept and her hopes she can continue the dream the next time she sleeps.

In the Mess Hall, Neelix finds himself helping prepare for a party to honor their Enaran guests.  As everyone sets up the food and entertainment, Captain Janeway gets a surprise when she experiences Jor Brel’s telepathic abilities as he assists her in playing an instrument.   After apologizing for the apparent intrusion, the leader of the delegation, makes it clear that this is not something they typically condone unless permission is given.  She understands and accepts.

That evening, Torres experiences another vivid dream, this time it seems her father is not pleased with her love affair and she is forced to leave her lover.  After her father leaves, she sees her lover again only for him to scream out in pain with his skin burning.

Informing Chakotay of the continuing dreams, he suggests talking to one of the Enarans about it.  She agrees and heads to engineering only to be struck with another segment of the dream.  In this one she learns that her Father is giving her an award in recognition of her efforts in the colonization. There she sees her lover but do not risk showing they are together. They agree to meet at a later date.  As Torres has her vision, she is found by Kes who has her taken to sickbay. 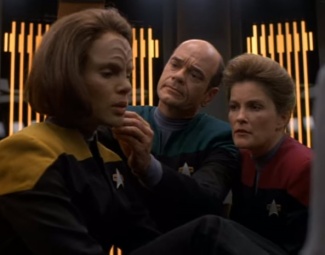 Waking in Sickbay, Torres learns that she is showing strong signs of telepathic activity in her mind. It seems that someone has planted these memories into her subconscious and the Doctor wants to put a cortical inhibitor on her to suppress the memories until he can determine the damage that has been done. She is reluctant but agrees.

After confronting Brel about the situation, the Enaran leader indicates that he does not believe that this is being done intentionally.  His best guess is that she is picking up on random thoughts from the Enarans on Voyager.  Tuvok believe this is possible but both he and Janeway decide to continue the investigation.  Torres is given time off to recover but, when she gets back to her quarters she removes the inhibitor to find out more.

In her next vision she learns that a group called The Regressives have been chosen to be used for the colony world.  As they prepare the colonists, she is shocked when her lover, Alaris’, name is called as one of the colonists.  When he doesn’t arrive her father believes that she warned him.  Soon she is knocked down by one of the other potential colonists causing Torres to wake up with an injured face.  Rushing to the room of one of the Enarans, she finds Mirell unconscious on the floor and goes to help.  Jora Mirell insists that she give Torres the rest of her memories as she can no longer hide what the others are hiding.  Torres finds herself in her room in Jora ‘Korenna’ Mirell’s body talking with her lover Alaris.  He wants Korenna to come with him but she can not.  He tells her that he has heard that Regressives are not being colonized but killed in route.  Not believing him they are interrupted by her father and Alaris hides. Her father explains that the Regressives are lying when Korenna confronts him with the rumor and ultimately gives her lovers position away.

Later she sees both Alaris and other Regressives being put to death and later finds herself teaching children that the Regressives killed each other due to their stubborn nature and they have all died out.  Torres wakes finding Jora dead and all of her memories of this atrocity in her head.

With these memories fresh on her mind, Torres barges into the party accusing the Enaran chief of killing Jora and telling everyone of the truth regarding the Regressives.  No one seems to believe her despite the clear memories she has experienced. While Janeway is shocked at the accusations and believes her Chief Engineer, she allows the Enarans to disembark peacefully.  While Janeway can not find any sign of foul play in the death of Jora, she can not hold the Enaran’s past against them.  Cancelling shore leave and any trade negotiations, Janeway advises Torres to talk with the Enaran engineers who are packing up.

Going to Engineering she talks to Jessen who, although is reluctant to believe her, allows Torres to transfer these memories to her so that she can see the truth for herself.

This is a great example of a ‘ship in a bottle’ episode, meaning that, in order to save budget, the show only focuses on ‘in ship’ action making it easier to film.  In order to pull this type of episode off, without a ton of extra sets and special effects, the story has to be a strong one. 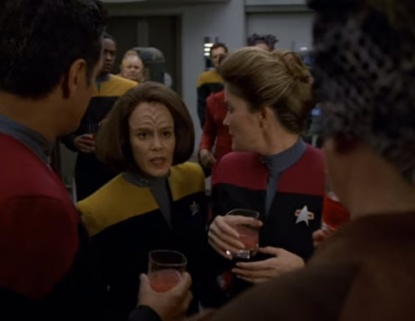 While this episode manages to get it’s point across it does so in a way that doesn’t quite work, but still manages to get the point across.  This episode is clearly a parable about the constant attempts of people trying to bury the truth of The Holocaust or any number of other horrible events that have taken place in our world.  From the Japanese internment camps in the US, to even the more recent cases of the Federal Government putting children in cages, these are things that are buried under plausible deniability only to be forgotten when the next ‘event’ takes place.  String enough events together and people begin to see this as normal. 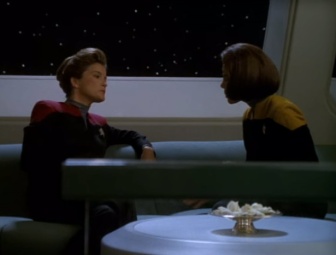 One other thing this episode shows is just how easy it is to find yourself falling into line with the status quo.  For much of the episode, we see B’Elanna’s dreams showing her in love with one of the Regressives. However, when her father convinces her that her lover is exaggerating how bad things are, she finds herself convinced that it must be true.  While she had been incredibly in love with this man, she soon finds herself forgetting that everything her people claimed about the Regressives was false.  She allowed this hatred to consume her and to cloud her mind from the truth she new all along.  Only in death was she able to finally admit her faults with the hopes of letting people know the truth.  It is in times like this that we must find a way to keep to our own beliefs and not let the group mentality take hold changing us from who we know we are. 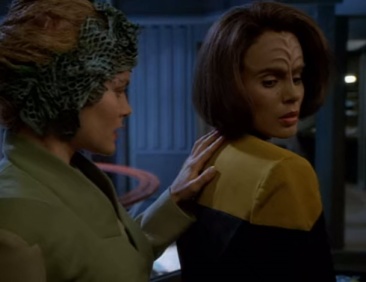 There is an old story about a man who kept arguing with those who refused to listen to reason.  When one of his friends told him that he should stop as he would never change their minds he smiled and said, ‘ I do not say the things I do to change their minds, I say them so that they won’t change mine.’

Overall, while this is not the strongest of episodes, it is one with a good message. Roxann Dawson does a tremendous job showing her pain and vanquish as she begins to realize that these dreams are part of a hidden history. Great science fiction holds a mirror up to our faces that shows us the dark and evil side of our world while turning it into a parable that can be understood by anyone.  In the case of Remember, we have to remember that as long as there are people who document the truth, no one can hide under false stories and ‘fake news’, the truth always emerges, even the uncomfortable truths.  It is just up to us to accept them or not. It is up to us to follow the crowd or think for ourselves.  Neither are easy.

Thanks for reading the Retro TV Review,  I look forward to discussing the rest of the series with you, one episode at a time every Monday, Wednesday and Friday!  Next Review: Sacred Ground