Science and Religion collide as Janeway must find a way to save her crewmember using an ancient ritual.  Originally aired on October 30, 1996, this is Sacred Ground.

After Kes is injured during shore leave, Janeway must help bring her back using a mystical ritual that the Captain does not fully believe in.

The Crew of Voyager get a chance for some R&R but things get bad when Kes mistakenly touches a shrine and is knocked unconscious by it. Rushing her to the ship, the Doctor soon makes it clear that there is little he can do for Kes as she seems to have fallen into some deep coma as a result of neuroleptic shock.

Determined to find an answer, Janeway begs for help from the Nechani Magistrate, a path that only leads her to no assistance as they have determined that the spirits must have a reason for what they have done.  Returning to Voyager, Janeway finds a legend that indicates someone in Nechani history went through a similar ordeal. Using this information, the Captain is given special permission to undertake the ritual for her crewman Kes hoping to find a way to quietly gather scientific data.

After preparing for her time on the planet with research into various religious and cultural rituals, Janeway is outfitted with an implant and heads to the surface to begin her experience.  There she finds a guide who manages to take Janeway’s tricorder from her, but provides the Captain with a robe and skin markings in return.  The guide makes it clear that she is not familiar with the ritual but takes Janeway to a room full of older people who invite her to wait along with them.  Interestingly, they indicate they have waited there for a long time.

After some time Janeway begins to grow impatient as it seems that nothing is going on with this ritual but…waiting.  Attempting to leave, The Captain is informed that, if she leaves, then there will be no chance in saving Kes. Insisting on some sort of physical ritual, her guide complies giving Janeway a multitude of tasks culminating in Janeway being asked to place her hand in a box containing a poisonous being. Placing her hand in the box she is soon feels hot and loses consciousness.  Leaving her alone, her guide acknowledges that everyone dies eventually.

Waking on a beach,  she encounters her guide who seems to be speaking for the spirits themselves. Although she begs for them to give her the answer, they indicate that she already has everything she needs to save her crew-member.  Returning to ‘reality’, Janeway rushes back to Voyager with ‘the answer’.  However, she is dissapointed when, although they are able to stabilize Kes using the venom from the bite she received, Kes is still not recovering consciousness.

Returning to the planet Janeway confronts her Guide, indicating that she did everything that was asked of her. Her Guide tells Janeway that the Captain merely went through what she THOUGHT was necessary but was all part of her own expectations.  Janeway accepts that she needs to do everything she can to save Kes and is willing to accept any help, even help that is not derived through science.

Soon Janeway orders Chakotay to beam Kes back to the shrine.  Although Chakotay resists the Captain’s notion to bring Kes back through the very field the rendered her unconscious, Janeway refuses to bend.  With full acceptance that she has to accept that there are things she does not understand, she takes Kes into the field with her restoring Kes to her former self.

Back on the ship, The Doctor attempts to explain the scientific reason why Janeway was able to save Kes but Janeway has to accept that some things are just explainable.  Walking out, she realizes that she has to be okay with some things being left to faith. 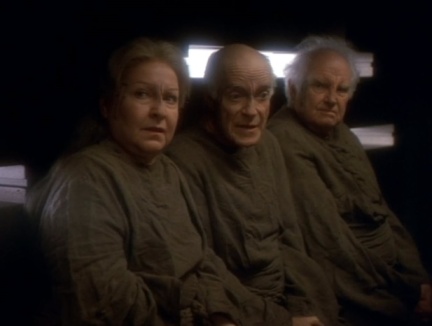 There has always been a debate between the validity of Faith and Science and, like any good scifi series, Voyager takes that debate head on.  What this episode does differently than most, however, is that it never leans one way or another, instead showing how the two can be used in conjunction with one another creating a perfect blend of faith and science.

Through Janeway we see the struggle many of us face when asked to determine which has more validity.  Janeway is someone who likes a quantifiable answer, a reason for something to exist.  From early childhood she was one who looked to math and science to explain the universe and, for the most part, it has never failed her.  Janeway has always been respectful of others beliefs, from when her own Commander Chakotay works with her to find her own animal guide, to the spiritual beliefs of any culture they might come in contact with. It is only when the belief of another people threatens the life of one of her own that she begins to falter.

Interestingly, it is the one person who you would think would encourage her in her exploration of faith that falters as well, Chakotay.  Through the series it has been abundantly clear that Commander Chakotay follows the spirits and his various guides in pretty much every day life.  From asking his dead father if some rando kid is his own to putting himself in peril to speak to his ancestors, Chakotay has been first and foremost Faith First in all things.  For much of the series he has been a careful balance to Janeway’s Science First mentality making them almost Voyager’s own Mulder and Scully.  However, in what would seem like an opportunity to help Janeway work through her crisis of faith, Chakotay somehow takes the opposite stance stating throughout the episode how she is needlessly risking her life and even suggesting they keep her from finishing her journey because he is ‘worried about her’. 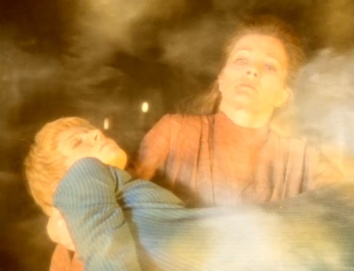 While it makes sense to have an opposition in this, choosing Chakotay as that opposition seems to be rather ill informed and frankly very out of character for the Commander.  If anyone it should have been Paris or even Tuvok, but for a man who takes every opportunity to commune with the spirits to suddenly start doubting them, it seems a little odd.  While this isn’t the first time this series has forced a character to do something or act completely out of the established character, it is by far the most extreme at this point.  Is Chakotay himself having a crisis of Faith?  If so, what brought this on?

Despite the massively strange response by Chakotay, this episode is actually a pretty solid one.  This episode also marks the directorial debut of Robert Duncan McNeill who has become quite the director since.  Overall, I really dig this one and LOVE how much character development we get for Janeway.  Despite it’s flaws, it’s a good one.

Thanks for reading the Retro TV Review,  I look forward to discussing the rest of the series with you, one episode at a time every Monday, Wednesday and Friday!  Next Review: Future’s End