It’s body snatching madness on Voyager when Kes becomes someone else!  Originally broadcast on November 20, 1996 this is WARLORD!

Kes has her body taken over by an evil revolutionary who is determined to return home and continue his revolution.

After Neelix collaborates with Harry and Tom on a relaxing island holo-program, the two officers are called to the bridge to help with a rescue operation.   Beaming aboard the injured crew-members of an alien ship, Kes and the Doctor do all they can to assist but lose one in the process.

Soon Janeway offers to take the survivors, Adin and Nori, to their homeworld, Ilari which is two days away. Kes begins to spend more and more time with the survivors and, before long much to Neelix’s surprise, Kes informs the Talaxian that she wants to separate for a while.  She informs her former lover that she simply needs to get to know other people and he is standing in her way.  Neelix is saddened at the revelation but can not do anything to change her mind. 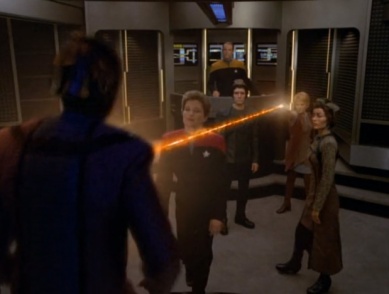 Things get crazier when, upon their arrival at Ilari, Kes kills the transporter chief and the Ilari representative in a sudden attack.  Although Janeway attempts to stop Kes, the Captain is soon knocked unconscious and Kes, along with Adin and Nori, escape in a stolen shuttle.

It is soon revealed that Kes has been taken over by the dead Ilari, Tieran, who uses his mental powers to prove his domination to a new passenger named Resh.  It seems that Kes/Tieran has plans to use their troops to launch an assault that has been planned for some time. 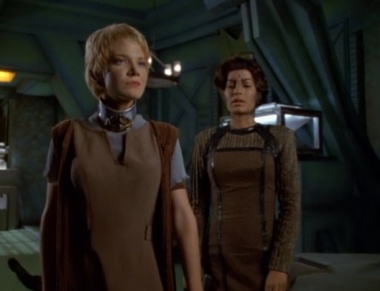 After a failed attempt at following the stolen shuttle, Janeway meets with Demmas, a dignitary from Ilari, who explains what has happened.  It seems that the former Autarch of Ilari, Tieran, has found a way to stay immortal by taking over other peoples bodies.  Although Demmas claims that it is impossible to rescue those taken by Tieran, Janeway is determined to do just that.  They soon discover the location of the shuttle and it appears Tieran/Kes and her team has taken over the Imperial Hall and claimed the throne for herself. 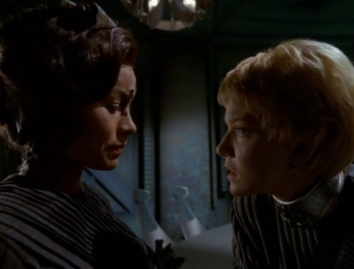 In the Imperial Hall, Tieran/Kes begins changing things to where they were during his their reign.  After killing the current Autarch, They find things are not quite the same as Tieran struggles with Kes’ memories and personality. Still in love with Nori, They assure her that They are still very much together.  Meeting with the previous Autarch’s son, Ameron, they soon begin forming an unlikely union.

On Voyager Demmas, the elder son of the former Autarch, fears that Kes/Tieran has taken over his dynasty including his younger brother. Although Demmas wishes to launch an attack, it seems that the Doctor may have found how Tieran is able to use his abilities.  With The Doctor creating a device to pull Tieran from Kes’ body, Janeway and Tuvok device a plan to save Kes and free the Ilari people.  Little do they know Tieran/Kes has had a new cortical implant installed.  Tieran finds that Kes is fighting back but sees this as an inspiration.

Soon Tieran/Kes discovers that Tuvok has hidden himself among Their guards and, although he is able to attached the device, he fails his mission.  Now captured, Tuvok finds himself under interrogation by his possessed friend.  During the interrogation Tuvok is soon able to conduct a mind meld allowing Kes to emerge briefly.  Tuvok encourages Kes to keep fighting but the connection doesn’t last long. Upset at Janeway’s ploy, Tieran/Kes orders Voyager to stand down and leave orbit.  They threaten the crew and Demmas’ people but tips their hand when it is clear they are fighting an internal battle.

Determined to stay awake for fear that Kes will take over in his sleep, Tieran fights until he can not.  Soon he finds himself facing Kes in his mind learning that she is a formidable foe. Although she can not drive him out, she promises that she will remain an annoyance to him for the remainder of his life.

Although weakened and infuriated by the constant attacks from within, Kes/Tieran announces their wedding to Ameron.  Nori is not happy at the revelation but it is soon clear that Tieran is losing his battle.  Although they are under attack, Kes/Tieran demands they celebrate their recent union.  With Voyager and Demmas joining forces, they soon manage to attack and save Tuvok.  Using Kes/Tieran’s dissolving mental state against Them, Janeway and her away team manage to overwhelm the monarch restoring Kes to her own mind.  At the last moment, Tieran transfers his mind to Ameron but is thwarted by Kes.

Back on Voyager, speaking to Tuvok, Kes attempts to reconcile her actions with Tieran. Tuvok assures her that, although her life will be different from these experiences, she is in full control to determine her own fate from here on out. 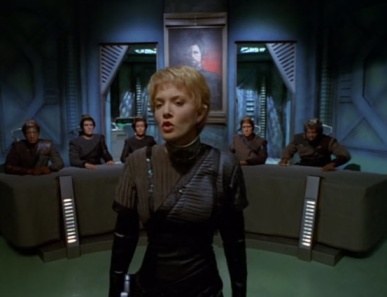 The story itself is a pretty basic one.  Former Monarch with body swapping abilities tries to take over his former kingdom.  It’s been done in so many other forms and was really nothing all that special, the thing that makes it special is the work of Jennifer Lien.

It is episodes like this that makes me really miss actor Jennifer Lien and her role as Kes.  While I am getting well ahead of myself, it is no secret that this is in fact her final full season with Voyager.  I will leave the how of her departure unspoken for the time being but it is something that really puts this season in a different perspective watching it again.

If anything this episode really shows Lien’s range as an actor, making us realize just how good she really was on the show.  Unfortunately the writers never really felt in necessary to give her much more than a background role, constantly being sidelined as the ‘cute pixie girl with random mental powers’.  Man, there was such opportunity for her character in this series but it never really got a chance to show until it was too late.  In a way I almost feel like this was her season to shine and, just when she was getting there…well, we will cover that later.

One interesting thing to note about this episode is the breakup of Kes and Neelix. While it is assumed that it was Tieran ‘distancing’ himself from our Talaxian cook, this event will have ramifications further down the line.  Kes and Neelix have always been a couple from the start but it seems that Kes has been feeling… a little trapped.  In fact, the final moments of this episode do suggest that her relationships with her fellow crew-mates will change, and boy do they.

Overall, a Solid, if not forgettable story, with extraordinary performances specifically from Lien herself. Worth watching for sure.

Thanks for reading the Retro TV Review,  I look forward to discussing the rest of the series with you, one episode at a time every Monday, Wednesday and Friday!  Next Review: The Q and the Grey