This is it.  The final Episode of Star Trek The Next Generation Season Six.   In this episode we get to see the return of several characters, some of which we never thought we would see again and the downfall of one we never would have expected.   Originally airing on June 21, 1993, this is Decent.

The Borg are back but this time they are different…they are individuals.   Data soon finds himself feeling things and we all know, he has no emotions…

The Episode opens with Data playing poker with the greatest minds of science, Sir Isaac Newton, Albert Einstein and Stephen Hawking.  Just as Hawking plays the winning hand, Riker calls a Red Alert interrupting the game.   It appears that a nearby outpost has called for help and, when they arrive, they find the occupants have been slaughtered by the Borg.   Within no time at all the Borg begin their brutal attack, acting unlike themselves, the Borg are on the warpath and begin to kill rather than assimilate.  During one of the attacks, Data suddenly becomes angry and violently kills one of the drones.  When another Drone recognizes Data, they stop their attack and leave without any further explanation.  Nothing seems right, Borg who attack as individuals, Data getting angry, things are certainly out of order.

Data asks to be relieved of duty and begins exploring how and why he ‘became angry’.  He is worried that there is an issue and needs to understand the situation.  Riker gives his briefing about their encounter, noting that the Borg they encountered were violent and very ‘Klingon Like’.    Soon Admiral Nechayev arrives and informs Picard that they are preparing for the new Borg threat. She chastises him for his decision to release Hugh a year prior, instructing Picard that he should ignore his morals next time and eliminate the Borg at all costs.

Meanwhile,  Data is concerned that the only emotion he can feel if anger.   Although he was excited to feel emotions for the first time, he is concerned that he is becoming evil.  What concerns him the most is, when he killed the Borg in anger, he felt pleasure in the act.  Data recreates the Borg attack in the holodeck in order to see if he can feel anger again.   Unfortunately, or fortunately for this matter, it doesn’t work. 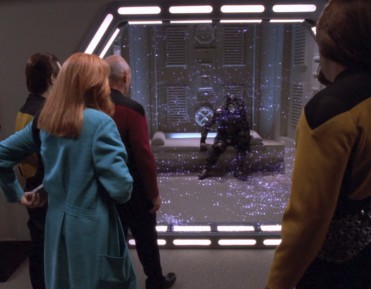 Soon the Borg arrive and begin their attack.  More ferocious than ever, they attack and leave without any indication of their purpose there.  The Borg ship escapes but leaves behind one of their drones.   The drone identifies himself as ‘Crosis’ and informs the that ‘The One’ has sent them and they will be their downfall.  Data is left behind to determine if Crosis is attempting to send a signal to the Borg fleet.   While they are talking, the Borg activated a device and suddenly Data begins experiencing emotions again.  Soon Crosis convinces Data to leave the ship with him and they steal a shuttle craft.

The Enterprise follows Data and Crosis into the trans-warp conduit in order to save their friend and find the location of the Borg base.  Upon their arrival, Picard leaves Doctor Crusher in command and leads the away mission to rescue their lost comrade.   They soon find a large structure on the planet and, upon entering, it is clear that this is the base of the new Borg army.   As they attempt to leave, the Borg arrive and they soon discover who is behind the new Borg,  it is none other than Lore. Data steps from the shadows and tells them that ‘the sons of Soong have joined together, and together [they] will destroy the Federation.’ 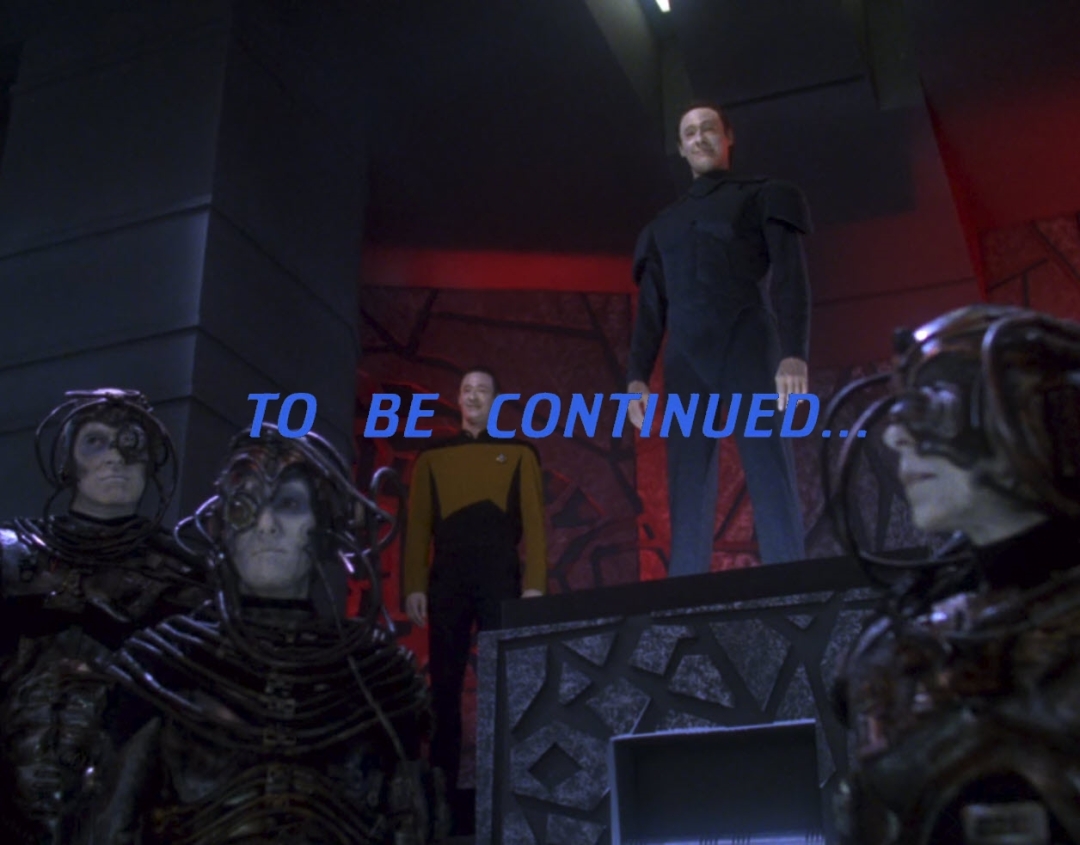 This is one of my favorite season finale episodes.  I distinctly remember talking with my friends about this episode and speculating on what would happen.  We all were aware that this was probably the penultimate season for STNG so anything could happen to the characters at this point.  Data turning evil was certainly unexpected but not an impossible stretch of the imagination.  How amazing would it have been should the finale season have their own comrade as an enemy?

This episode really gives Brent Spiner a chance to shine as Data grapples with his first true encounter with emotions.  Although he has experienced emotion in the past, it was always from an outside source such as Q.   This time it appears that the emotions are coming from within Data himself and he does not know how to handle them as well as he should.  Spiner does an amazing job showing the genuine concern over these newfound emotions and we begin to see what a conundrum this really is for our Android friend.

On another note, The idea of the Borg having their individuality and thus becoming more violent all due to a choice Picard made is in of itself an interesting concept.   Picard has always tried to have a moral center when making decisions.  It has been a big part of his character and makes him all the better for it.  Imagine then, if this very moral center is responsible for a new more violent version of the Federation’s worst enemy.  If this was indeed the case, was Picard still correct in allowing Hugh to live or should he have sacrificed this individual for the greater good?   And in that, what is the greater good? When on point this is one thing that Star Trek does well, moral dilemmas and forcing us to question even the basic of beliefs. Many times it leaves the answers to the viewer allowing for discussion on the topics. I could get into the moral quandary of the situation, but I digress.  Overall, this is an excellent episode with a terrific cliffhanger that takes us right into the final season of Star Trek The Next Generation.

We see the Borg symbol for the first time in this episode.  It is never confirmed that this is, indeed, the insignia of the Borg but it has since become synonymous with them.

In the opening teaser, we see Data playing cards with some of the greatest minds in science.  Stephen Hawking plays himself in this segment and marks he first time a real world ‘historical’ person is played by the actual person in Star Trek.

This is the first time we have seen Lore since the Season Four episode Brothers.  It is unknown exactly what he had been up to until now.

Thanks for reading the Retro TV Review,  I look forward to discussing the rest of the series with you, one episode at a time every Monday, Wednesday and Friday!  Next Review: Star Trek The Next Generation Season 7 Premiere Descent Part II