Key Movies Of My Life: Clive Barker’s Lord of Illusions (1995)

There were key movies in my life that helped to make me who I am today. Movies that I have loved from the moment the opening credit rolled and still love now. This blog series is about those, My guilty pleasures, my favorites, my escapes. Some were very popular, others not so much. Some of these will have some real life take-aways, others are just for fun. Today we discuss one that involves magic and a darkness that could only come from the mind of Clive Barker. This is Lord of Illusions.

Detective Harry D’Amour (Scott Bakula) finds himself swept into a evil cult when the wife of a famed magician hires him to protect her husband from the cult who followed a man named Nix (Daniel Von Bargen). Written and Directed by Clive Barker this is dark tale about the true magic that is hidden behind illusions.

When I first heard that this film was being made I was excited, not only was I a fan of Clive Barker’s work but I was also a fan of the lead actor Scott Bakula from his days on the scifi series Quantum Leap. Not only that but I had already been introduced to the character of Harry D’Amour via the original short story The Last Illusion and his subsequent appearance in the Novel Everville. Needless to say, I knew what to expect going in and I was ready for whatever it was that Barker had in store for me.

By the time this film hit the theaters I had already seen how good Barker was at being a director through his efforts on Hellraiser and Nightbreed (which I will get to eventually trust me). Thankfully I was old enough to go see this one on my own and it’s likely I took a date to see it. (and even more likely it was our only date seeing how dark this film was). Nevertheless, this movie quickly became one that I would watch over and over when it hit VHS and was one that I even purchased at some point. I vividly remember the VHS case having a lenticular cover making it an even cooler add to my rapidly growing collection of horror films. 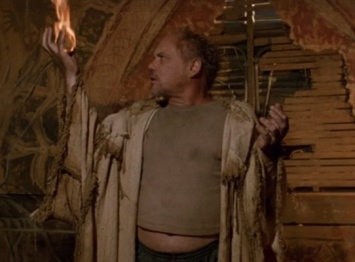 To me, you can’t get much better than this when it comes to Barker’s films. While I loved Hellraiser and frankly adored Nightbreed, I was enraptured by the layers of story that The Lord of Illusions provided. From the start you find yourself sucked into a vast and deep world of magicians and illusionists who hide deeper secret than every before. The story is violent, bloody and steeped in mysticism making it a stunning journey to behold.

There is no doubt as to Barker’s talent as a director in this film. His eye for detail is matched only by his pacing and framing but that is to be expected from an incredible novelist and artist. Of course no director would be worth their talent without a great cast and Barker manages to get more than his fair share. In addition to the incredible Scott Bakula, Barker manages to enlist some greats such as Wayne Grace, Barry Del Sherman, Kevin J O’Connor and even Famke Janssen to bring along their talents. Everyone in the film does an incredible job making the audience believe that the illusions are real and what you see in our world is tantamount to parlor tricks.

Much like that of John Carpenter, Barker is all about story first and everything else after. He is a master storyteller and it is clear all over this film. Don’t go in expecting a slasher film, this is one that you need to watch and listen to. Lord of Illusions is a Detective Noir story that dives deep into the Clive Barker mythos and will certainly make you want to explore more about D’Amour and his exploits as a detective. While we do get some great stories in Everville and even the Scarlet Gospels, I think it is time for D’Amour to make his television appearance. Clive, if you are reading this, please give us a Harry D’Amour tv series. Please?

There is a wonderful collectors edition on Bluray from Shout Factory. Shout Factory is one of the best when it comes to horror and frankly you can’t get much better than this. If you don’t want a physical copy Lord of Illusions is also available in digital format. Give it a go, you’ll dig it.

One thought on “Key Movies Of My Life: Clive Barker’s Lord of Illusions (1995)”