Do Androids dream of electric sheep?  Well, we find out in the episode that originally aired on October 25,1993.  Directed by Patrick Stewart himself, this is Phantasms.

Data begins to have nightmares and the crew attempt to figure out why.

There is a lot happening in this episode so…bare with me, this may get lengthy.

We open with Data walking down a very long hallway.  The first thing you notice is that the camera has an odd fish-eyed view.  It is rather disconcerting but then things get really weird, Data comes across a group of miners dressed in old west gear who are dismantling a warp plasma conduit with tools, all the while a phone is ringing.  When they notice him, they begin to literally tear him limb from limb.   He suddenly awakes in his bed, uncertain of what has just occurred.

After installing a new warp core and beginning their test run, Picard is distraught with the news that he has to go to the Starfleet Admiral’s Banquet that he has avoided for the past six years.   As Picard laments his bad luck, Data informs Geordi of his recent experience with nightmares.  Geordi is dealing with his own nightmare in the form of Ensign Tyler, a new member of his team who is quite…interested in him.   As they prepare to go to warp with the new warp core, the ship stalls out and it seems that the Enterprise is going nowhere for the time being. 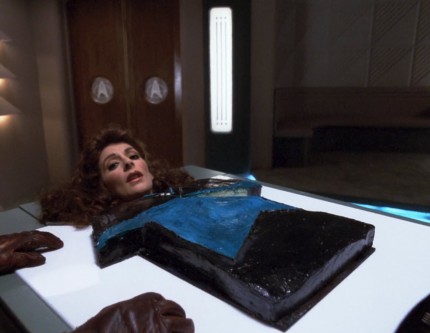 That night, after discussing the matter with Troi, Data attempts to explore his dreams further.  To his surprise he finds a very surreal dream involving some truly disturbing imagery.  Worf is eating a cellular peptide cake (with mint frosting) made from Troi herself while Crusher is sucking something out of Rikers head with a straw.  Data awakes to find his friends standing around him concerned that he was not waking up.  Data is late for his shift and has, unexpectedly overslept, something that should not be possible. 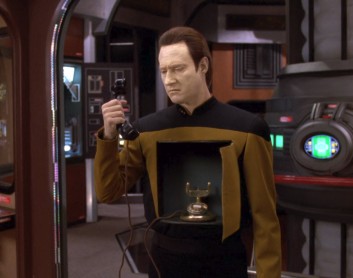 After being contacted by Admiral Nakamura, Geordi announces that he believes the ship to be repaired.  As they launch into warp, the ship suddenly comes to a stop and La Forge indicates that he can fix the issue in two hours.  Data begins to assist in the repair but suddenly finds himself holding the very knife he had in the dream where Troi was a cake.  Things get stranger when a mouth appears on Geordi’s neck. Suddenly a phone begins to ring and Data finds himself alone with Riker (who has a straw sticking out of his head).  Riker demands that Data answer the phone and he finds the phone has been inside of him all along. Answering the phone, Sigmund Freud tells him to ‘kill them all before it’s too late’.  He awakes to find himself standing in Engineering with the knife in his hand.

Picard is contacted by Admiral Nakamura who is not happy that Picard is late for the Admiral’s Banquet. Picard assures the Admiral that he will indeed arrive on time despite the constant issues preventing his arrival.  He attempts to assist in Engineering much to Geordi’s dismay.  Tyler manages to distract the Captain and, as La Forge is talking to Data, he discovers his friend has vanished.  We soon find Data in pursuit of Troi and, suddenly, he stabs the counselor with the knife from sickbay.  Soon Worf and Riker find Data attacking Troi and take him into custody.  Data explains to Picard that he had a sudden urge to remove a Mouth from Troi’s shoulder.  He can not explain why but understands that he must be confined to quarters until they figure out what is happening. 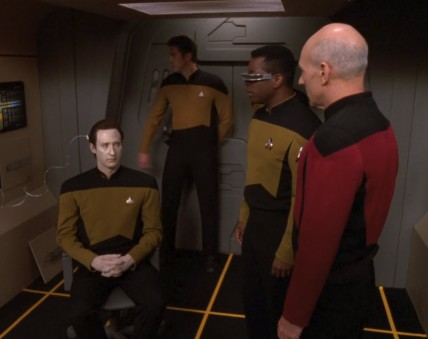 As Doctor Crusher begins treating Riker, she discovers strange organisms attached to the crew.   Troi has one in the spot that Data stabbed her and Riker has one where Data saw the straw in his head.  It appears that Data is dreaming about these things without realizing it.  Picard indicates that they need to look deeper into Data’s dreams via the holodeck.  Geordi and Picard attach Data to the holodeck and Data initiates his Dream program.  They begin to watch the events unfold.

As he dreams they find themselves following Data as he cuts into Cake-Troi.  As they explore, they begin to learn more about the creatures through Data’s dream imagery.  Soon the phone begins to ring and it is Sigmund Freud again who insists that Picard ‘kill them all before it’s too late’.  Suddenly they find themselves in Freud’s office where they are attacked by the miners from the beginning of the episode.  The Miners begin to hammer away at the new warp core conduit and, when questioned, they get agitated and try to kill Picard and Geordi.   Data lets out a strange shrieking noise and realizes what they must do to stop the alien infestation.

It turns out that the new Warp Core had been infested by invisible creatures that were dormant until the warp core was brought online.  Sadly the repairs needed will take at least six hours and Picard will miss the banquet afterall.

In the end, Troi presents Data with a cake of him since he did dream of her as a cake after all…

This is a fun episode with a proper sci-fi theme.  Using Data’s dream program as a launching platform (something no one really expected to be revisited), we get a chance to actually see more of what goes on inside of Data’s head.  It is a strange and wondrous place for sure but one that eventually ends up helping save the crew in the end.  In a way this episode is the personification of Deus Ex Machina, The Machine literally saves the day in a convenient and unexpected way.

Overall this is a solid entry for the season.  While it doesn’t further the characters much, it shows some of the everyday happenings on the ship.  We learn that the Enterprise does need to be upgraded from time to time and these upgrades, even in the future, may have unintended consequences.  We also see that Picard isn’t fond of social gatherings with Admirals, something he tries to avoid annually and has managed to do so for the entire length of the series.

One bit that annoyed me however was the way Geordi treated Ensign Tyler.  For the man who made himself a holographic girlfriend he has the nerve to be annoyed at a young woman who has a crush on him.  I mean, yeah, she is a little annoying but, Geordi, don’t you remember how devastated you were when you were denied a romance with someone you liked…multiple times?  Have some perspective, man. 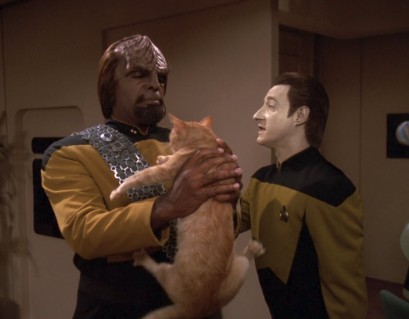 When Data is confined to quarters, he asks Worf to care for Spot.  This will later be revisited in a deleted scene from Star Trek Nemesis.  Worf volunteers to take care of Spot in Data’s absence on the ship after the events of the film.

Data mentions that Spot is Male but we will see later in this season that Data may be a bit confused.

Thanks for reading the Retro TV Review,  I look forward to discussing the rest of the series with you, one episode at a time every Monday, Wednesday and Friday!  Next Review: Dark Page