Cat Training and Environmental Awareness in the episode that originally aired on November 15,1993.  This is Force of Nature.

Scientists disable the Enterprise in order to prove that Warp Engines are destroying subspace.

The Medical Transport Fleming has vanished in the Hekaras Corridor and the Enterprise is sent to investigate.  It appears that there is a chance that the ship has been attacked for it’s shipment of bio-mimetic gel and the crew begin the task of finding the missing ship.

As the Enterprise explores more, they encounter a device that disables the ship. Within moments a small ship arrives and boards the Enterprise.  The two people who beam aboard tell Geordi that they just want someone to listen as the Enterprise is killing them. Picard talks with the intruders and learns that the intruders are scientists who claim that their planet is dying due to the use of the Warp Drive.   They have started disabling ships in order to get the attention of the Federation.  They indicate that they have tried to go through proper channels but to no avail.   Picard agrees to hear them out and the intruders, now identified as siblings Serova and Rabal, begin to help with the repairs on the ship.

Data begins to investigate the siblings claims and he soon finds that they may be on to something.   Although Picard agrees to get a science vessel to study the issues, Serova is upset, claiming that this is only more delays.  She storms out and sets her ship to explode in order to show Picard and Crew that their Warp engines are indeed damaging subspace.   Upon her ships destruction a tetryon subspace rift appears, proving Serova’s claims.

It is soon discovered that the rifts being formed are not isolated to the corridor they are in, in fact, they are appearing everywhere.  Ultimately Picard informs Starfleet of their findings and the Federation determines that there needs to be a Warp Speed Limit.   Worf indicates that, while the Klingons would likely follow such a limit, it is unlikely that the Romulan’s, Cardassians and others will follow suit.  It seems they need to figure out a better way to reach Warp Speed.

While a well made episode and a solid story, this is a heavy handed analogous episode about environmental protection.  This episode indicates that Warp Drive has been damaging the cosmos for the better part of a century and, now that they know the issues at hand, they need to find a better way.  Sound familiar?  Yep, this is about the use of fossil fuels and how it is hurting our environment.

While an important message, you can’t get the point across any more blunt than this episode.  While most socio-political commentary on this series is done in more subtle ways, this one all but beats you over the head with it’s message.  It is still very well produced and the actors do a marvelous job with what they have to work with but the message almost outweighs the story and that is never good.  There are even some very heavy handed dialogue near the end and it plays off as more of an afternoon special than an episode of Star Trek. 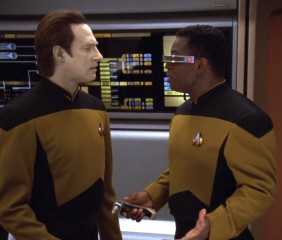 The opening is a nice moment between Geordi and Data where Geordi is having difficulty pet sitting Spot.  The Cat, referred to as She for the first time in the series, is apparently a terror and has all but destroyed Geordi’s quarters. He suggests training after we hear Spot break more items.

We get to see Geordi in a rivalry with a fellow Engineer on another ship.  This shows that Geordi has a bit of a competitive streak.

Data tries to train his cat Spot to not jump on his desk.  He fails.

The Warp Speed Limit is mentioned a few more times and eventually forgotten altogether.   It is assumed that the Federation simply found a more efficient means to go to Warp, because of course they did.

Now, even though this episode is rather heavy handed, it does have an important message.  We need to take care of our environment or we may not have it for future generations.  Nothing on this Earth is infinite, everything we use is finite and that is only part of the problem.  Humans are a wasteful people who continue to pollute and destroy the very world that gave us life.  If you want to help out, beyond recycling and keeping your carbon footprint to a minimum, here is a link to some great charities you can donate to.  It may not be much, but if we all help out somehow, we can make a difference.

Thanks for reading the Retro TV Review,  I look forward to discussing the rest of the series with you, one episode at a time every Monday, Wednesday and Friday!  Next Review: Inheritance