A relocated Scottish town, a generational rapey ghost and Doctor Crusher all wrapped up in the story.   Originally airing on January 31, 1994, this is Sub Rosa.

Beverly Crusher attends the funeral of her Grandmother only to be haunted by a ghost who also haunted her grandmother.

Yeah, you read that right.  Bear with me.

Crusher, along with key members of the bridge crew, attend the funeral of her grandmother ‘Nana’ Howard.  While there she notices a handsome man who looked forlorn at the death of Miss Howard.

As Troi and Crusher return to her grandmother’s home and begin to go through Nana Howard’s things.  Troi learns that Nana Howard raised Crusher after Beverly’s mothers death.   Troi leaves Crusher to her own thoughts only for Crusher to be interrupted by a man named Ned Quint who claims that her grandmother’s heirloom candle is cursed and that she should destroy it immediately.  She refuses and the man informs her that she is on her own and will not be responsible for whatever happens to her.

Picard is asked by the local Governor if they could get someone to upgrade the colonies weather infusion systems in exchange for a tour.  Picard agrees to the exchange and makes arrangements for the crew to stay a little longer.  Data and Geordi begin to work on the generators and find that there are some issues with the system that is causing some malfunctions.

Crusher shares with Picard that Nana’s grandmother’s journal indicates that she had been having an affair with a man 60 years younger than her named Ronin.  Beverly is impressed with her grandmothers affairs and is determined to learn more.  That night, she is visited by the very same spirit that wakes her up suddenly.

She tells Troi about her experience and attributes it to the rather erotic journals her grandmother left behind.  (can I say ick?)  She encounters Ned again and he warns her to be careful of the candle as it holds a ghost who is waiting for her.   Soon a storm begins to rise and, even though he claims that it is the ghosts doing, she thinks it is only the malfunctioning weather control system.  She rushes home only to find the house filled with flowers and the sounds of someone in her home.  She soon begins to hear the voice of the man she dreamt of and sees his face in a mirror. Just as she attempts to call the Enterprise for help she is assaulted by the ghost and practically spiritually raped by him.  He tells her that he is an 800 year old ghost who has been shtupping the Howard women one generation at a time.  It seems he likes to keep in in the family as he just loves those red headed Howard’s. 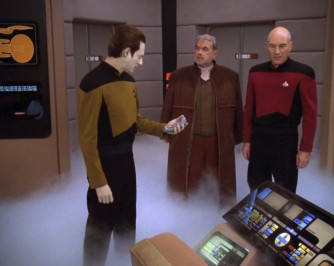 Back on the ship Troi finds out about Crusher’s involvement with her grandmother’s lover, Ronin.  Troi thinks it odd but it appears that Crusher is pretty into this Ronin.  Troi does warn Beverly that they could be rushing things since the loss of Nana, but Crusher dismisses her.

A fog rolls into the Enterprise…yes I know.   The weather begins to act strange all over the ship due to a power transfer with the colony. Geordi and Data return to the surface and find Ned tampering with the controls.  He yells something about being attacked by him and is immediately killed by a shock.   Crusher indicates that the man didn’t die by a shock but something else.  She returns to Ronin and tries to tell him about the accident. Ronin takes corporeal form and insists that Beverly lights the candle. He wants to join Beverly on the ship so that he can be with Beverly forever but in order to do so he must travel via the power transfer link.  She rushes back to the ship and lights the candle, he then appears in her quarters where he…enters her.

The next day Picard confronts her as she has decided to leave Starfleet and become a healer on Caldos. She beams down without so much as a conversation. Troi and Picard discuss the situation and he learns that her actions are likely due to someone named Ronin.  He wishes to meet this…Ronin.  Picard pays a visit to Crusher just as things were getting interesting between her and Ronin.  Ronin vanishes and Picard finds Crusher acting strange. He then notices her eyes have changed colors.  Just as he mentions that no one has seen Ronin, the spirit makes an appearance and challenges Picard.

Soon it becomes clear that whatever killed Ned is on the surface and Data returns to the colony to find where it is. They find something in the graveyard and begin to investigate. They contact Picard and let him know that there is some energy in Nana Howard’s grave.  They want to exhume the body but Ronin doesn’t want them to.  Ronin threatens Picard but Picard fights back.   Ronin then attacks Picard and knocks the Captain out using his ghost powers.

Data and Geordi exhume Nana and she rises from the grave!   It turns out Ronin is some sort of anaphasic lifeform that has been using the Howard women for generations acting like a ghost.  Beverly ends the cycle by destroying the candle and killing Ronin. 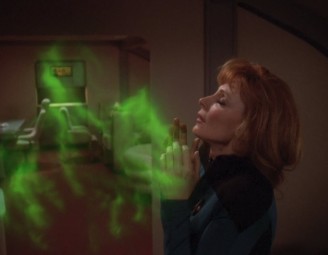 Sadly the Crusher curse continues as this is possibly the worst episode of the season.  Hands down, this is a pretty bad attempt at a ghost story.  I guess they figured since it was the final season they could try something new but this was certainly not it.  You would think that , with it being directed by Jonathan Frakes, it would be a good episode.  So far he has not had a dud but this one, wow, maybe he was due for a bad episode or maybe he just lost a bet but it is pretty bad.

I mean, really, a rapey ghost/alien thing that attempts to hook up with every generation of the women in one family line?  How is that not just one of the nastiest and dumbest things anyone has ever thought of?  It plays out like a bad romance novel written by someone who really doesn’t know what genre they are trying for.  I don’t think this is even a forgettable episode, it’s just a bad one.

There is nothing cool here, nothing. Move along.  Let’s get to the next episode, at least it will be better than this one. Ugh.

Okay well, there is something odd though.  So the ghost only sleeps with the Howard Women and Howard is Beverly Crusher’s Maiden name, something doesn’t make sense. If they are still recognizing Maiden Names, then it is right to assume that the tradition of taking the husband’s name is still a thing in the future, so the Howard clan would have been her Father’s clan, not her mothers.     However, as Beverly explains it, the candle had been in the Howard clan for generations symbolizing the Howard spirit. Then how in the world can her grandmother be Felisa Howard unless both her father and mother had the same last name?  Since Beverly’s parents were Paul and Isabel Howard,  and she specifically mentions that all Howard women had green eyes except her and her mother, this implies that the Howard Family had more secrets than just a ghost. Unless the Howard men specifically went after green eyed women who had a fetish for ghosts, this just doesn’t make sense. Maybe she and her mother don’t have green eyes because Paul decided to part with the family tradition of marrying his siblings.

Wow, that explains a lot about Wesley.

Thanks for reading the Retro TV Review,  I look forward to discussing the rest of the series with you, one episode at a time every Monday, Wednesday and Friday!  Next Review: Lower Decks