As the song says, ‘ Every new beginning is just some other beginning’s end’. This ending is just a little odder than we are used to.  Originally airing on March 28, 1994, this is Journey’s End.

Wesley Crusher returns on a vacation from Starfleet Academy while the Enterprise has to deal with a planet caught in the middle of a change on the border between Federation and Cardassian space.

After picking up a seemingly distraught Wesley Crusher, Picard meets with Admiral Nechayev to discuss the border between the Federation and Cardassian space.  Hoping to make her feel welcome and to dispel some previous misunderstanding, Picard prepares some Tea and canapes for her to enjoy.   Upon arriving she informs Picard about the change in the Cardassian border and that his mission is to evacuate a colony of American Indians who have settled on a planet that is now in Cardassian space.   Picard is concerned that forcing these people off of their planet will have unnecessary blow-back on the Federation due to the historical context.  She informs Picard that the colonists must be removed no matter the cost.

Picard visits with Anthwara, the head of the Tribal Council on Dorvan V where he explains the situation.  While they are upset at the situation, they are willing to discuss it further aboard the Enterprise during a gathering thrown by Picard. Wesley, who has been having some issues aboard the ship since returning, encounters one of the Native American tribe-members who identifies himself as Lakanta.  Lakanta tells Wesley that he had a vision of the young cadet some two years prior.  Lakanta informs Wesley that he is there to find what the young man’s purpose in life.

After the reception, Wesley visits the colony to talk with Lakanta.  Wesley asks what the man meant about finding his purpose.  Lakanta begins to challenge Wesley’s perceptions about the universe, claiming that Wesley himself is sacred there on Dorvan V.   Lakanta offers Wesley a chance to take his own Vision Quest.

Picard returns to the Tribal Council and informs them that he has to remove the people of Dorvan V if they do not leave voluntarily.  The Planet will be handed over to the Cardassians.  Anthwara informs Picard that the Captain is not there to remove them but to remove a stain of blood caused by one of Picard’s ancestors 23 generations prior.  Just as things couldn’t get any worse, Cardassians, led by Gul Evek, arrive demanding that the Native Americans be removed immediately.

Picard informs Admiral Nechayev about the situation and she informs the Captain that he has no option but to remove the Native American Population of the colony.  He begins to have doubts from what Anthwara told him of the Captains ancestry. Reluctantly, he asks Worf to begin preparations to remove the colonists of Dorvan V. 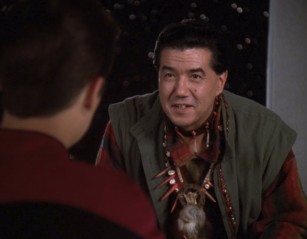 Meanwhile Wesley begins his vision.  In the vision, he sees his father who tells him that his journey has ended, that Wesley needs to stop following in Jack Crushers footsteps.  Wesley is confused but when he leaves the Habak he finds Worf planning to remove the populace from the village using a transporter.   Wesley challenges Worf and informs the villagers of his plans, causing the plan to end abruptly.

Back on board the ship, Picard is furious at Wesley.  He demands an explanation and Wesley explains that Picard is in the wrong, that following orders is not an excuse.  Picard informs Wesley that as long as he is in the Starfleet Uniform that he must follow orders, Wesley challenges by resigning from Starfleet Academy.  Picard is interrupted by a visit from Gul Evek.

Wesley explains his actions to his mother and tells her that he hasn’t been happy in years.  He doesn’t belong in the Federation and it has been eating at him for a long time.  He never told his mother or Picard about his doubts because he was afraid of disappointing them and himself.  The vision he had of his father made things clear for him to change his path.  Doctor Crusher then breaks down and tells Wesley what The Traveler told Picard about her son.   It is a secret she has held for years and because of this, she understands where he is coming from.

Wesley returns to the colony only to witness the Native Americans taking Cardassians hostage.  Just as things get volatile, Picard asks Gul Evek to intervene by beaming his men back to their ship.   Gul Evek responds by ordering troops to the colony.  Soon a fight breaks out and everything freezes in time.   Lakanta appears to Wesley and informs him that his journey has begun, he then reveals himself to be none other than The Traveler himself.  The Traveler tells Wesley that the young man has pulled himself out of Time and is ready to explore the universe in a whole new way.   Wesley is concerned about his friends but the Traveler tells him that it is not their place to intervene.

The fight continues and Picard begs Gul Evek to change his mind.  Sanity wins and Gul Evek removes his troops from the surface, as does Picard.   Evek does not want a war with the Federation and will do everything he can to prevent it.

Evek agrees to allow the Native American people to remain on the planet under Cardassian jurisdiction.  Evek informs Anthwara that if the Natives keep to themselves, they will  not be bothered.  Anthwara tells Picard that his ancestral slate is now clean.

Picard and Dr. Crusher see Wesley off as he transports down to the colony to learn from the people of Dorvan V. 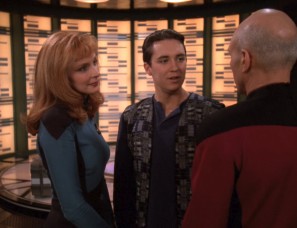 This episode sets up not only future events on DS9 but also the events that lead into Star Trek Voyager.  This is essentially the origin story of The Maquis, a rogue group of former Federation Colonists who opposed the border changes on the Cardassian borders.

Beyond that this is also the end of Wesley Crusher’s story in the Star Trek saga as he is now travelling in other planes of existence.   To be honest, that sounded like a pretty cheap way to say goodbye to a character we haven’t seen in a while at the end of the series.  In a way, it would have been better had they had him graduate and see him off on a ship somewhere.  Heck, Wesley could have been the Ensign Kim character on Voyager if they had thought about it. Don’t get me wrong, I dig Ensign Kim but imagine the cool connection and the drama he would have had judging Janeway based on his standards he got from Picard. Plus with how clingy his mother was, when Barclay finally finds Voyager there would have been a ton of drama there as well, and a much more interesting reason for Barclay to want to find Voyager.  We are getting WAY ahead of ourselves but that would have been some good storytelling.

Overall I am not sure if it is a good episode or not.  Yes it set up future events, sure it gave some half-hearted closure to a character, but it really felt a little cheap in a way.  I can’t really say it is a forgettable episode as it is rather memorable but not all in a good way.  Let’s just say, it’s passable and leave it at that.

This isn’t the last time we see Gul Evek.  He’ll be back.

This is the last time we see Wesley and The Traveler although Wesley does have a small cameo in Star Trek Nemesis.  A very small cameo.

Doug Wert returns as Jack Crusher and it will be the final time we see him as well.

Thanks for reading the Retro TV Review,  I look forward to discussing the rest of the series with you, one episode at a time every Monday, Wednesday and Friday!  Next Review: Firstborn