Seven has a personality disorder on the episode that originally aired on November 25, 1998. This is Infinite Regress.

Seven of Nine begins to have strange personality changes and they soon discover it is a Borg Vinculum causing the problems.

The story begins with Seven regenerating only to be awakened by voices. Sneaking into the mess hall she tears into a piece of meat like a wild animal. As she does this, her reflection is of a Klingon Warrior.

In the briefing the next day Ensign Kim reports finding the remains of a Borg Cube and they all agree to investigate. (because that NEVER causes any issues) Neelix then complains that someone ate a leg of Kelaran wildebeest and gets permission to add locks to the kitchen.

Seven soon encounters Naomi Wildman who is clearly studying the former drone. She is preparing to be the Captain’s Assistant and wants to learn all she can from the efficiency of Seven. Just as soon as Seven begins her rebuttal, her entire personality changes. Acting like a child she asks Naomi to go play with her. The two agree to go play kadis-kot and head to Naomi’s room. While the two play, Seven is hailed by B’Elanna and the former drone is pulled from her stupor only to find herself confused and lost. Naomi packs the game as Seven heads to Engineering. Seven soon begins having more and more instances of these personality changes resulting in a fight with B’Elanna, and, after several other shifts she is stunned and taken to sickbay. 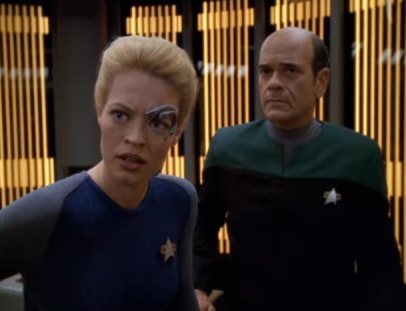 There is it determined that something is seriously wrong with Seven as she is being attacked’ by thirteen other identities that have suddenly emerged. Apparently these identities belong to people who had been assimilated by the Borg over the past 18 years and they have begun to resurface. Soon Torres finds the frequency that is causing the issues but they can not block it or even get out of it’s range, they have to shut it down at the source.

As the ship heads toward the source, Seven begins to discover that the personalities have been taking over as she sleeps. In addition to the kitchen raiding Klingon, she finds logs from Federation crewmen and a variety of aliens that she herself was responsible for assimilating. Disturbed by this revelation she tells the Doctor that she is uncomfortable being assaulted by the victims of her past. It pains her even more that she does not remember the names of the thousands of victims she condemned to be Borg.

Arriving at the Cube, they find that the cube has been infected by a synthetic pathogen that disrupted the hive mind causing all of the Borg in the vicinity to experience what Seven herself is going through. Beaming the infected Vinculum to the ship, the begin to look for a way to shut it down. Meanwhile Seven continues to have many other relapses including appearing as DaiMon Tarrot, a Ferengi who tries to buy the Astrometrics view-screen from Janeway.

The personality shifts begin to happen more rapidly causing Seven to break down as Torres closes in on how to shut down the Vinculum safely. Tuvok and The Doctor begin working on Seven but soon find that Seven’s neural pattern has been lost in the cacophony of other personalities and they are unable to retrieve it. Knowing that they must do all they can to save their crew-member, Janeway seeks out the makers of the synthetic virus as Tuvok prepares to engage in a mind meld with the former drone. 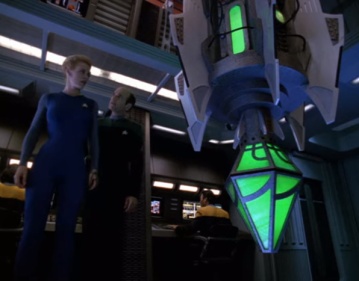 Janeway finds the aliens responsible and she learns that no treatment has been made as this was meant to kill the Borg. The Aliens ask for the Vinculum to be returned as it is their only defense against the Borg. Janeway agrees but only after Seven has been saved. Ven, the alien in command of the opposing vessel, informs Janeway that he will destroy her ship if they refuse to cooperate. As Janeway negotiates with Ven and his crew, Tuvok decides to use his Vulcan Mind-meld to assist Seven despite the Doctor’s reluctance.

Negotiations with Ven fail and as Voyager goes into battle Tuvok dives deeply into Seven’s mind to find her personality and bring it back. As the two battles are being waged, Torres is finally able to shut down the Vinculum allowing Tuvok to succeed in his mission and Janeway to beam the device into space for the attacking ships to retrieve.

After a week’s recovery, Seven in comforted to know that the personalities of the assimilated victims have been repressed and, while they will not reemerge again, they will always be a part of her. Seven shows her gratitude to Janeway and the crew for saving her and, knowing that she must give something back takes the time to engage with Naomi Wildman, even asking the young girl if Naomi would teach Seven to play Kadis-kot.

Seven of Nine is a great example of a character that was written specifically for a series. Coming into the series after so much has been established, this character arrived practically fully formed and with nothing but opportunity. That’s not a bad thing at all, in fact it is possibly one of the best things to happen to this series after the rather unbalanced first few seasons. Bringing in such a character gives the series a chance to both rally around a central focus while also exploring the other characters through their interactions with her. Sure, they have to be careful not to turn Voyager into the ‘Seven of Nine Show’ as that would not be fair to the already established actors and characters but to have this kind of anchor for a developing series is nothing short of fantastic. 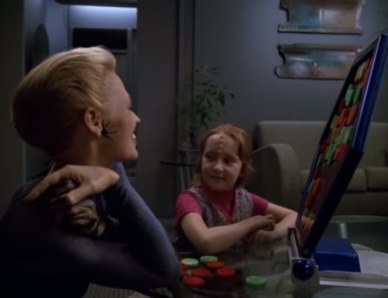 Jeri Ryan is a tremendous actor and, while we have seen her abilities from time to time, this is the first time have really gotten a chance to see her full range. You have to keep in mind, Jeri Ryan is not playing just a single role here, in fact she had to come up with an additional 13 distinct personalities in addition to the one she has been playing. Not only does she succeed, she excels at this attempt. Ryan manages to capture both the vocal and the physical attributes of her invasive personalities in such a way that there are moments you almost forget she is playing the same role.

Now, getting past the incredible job Jeri Ryan did in this particular episode, was the episode itself any good? In a word, yes absolutely. The Borg are still a rather mysterious race and frankly it is really cool seeing this species explored even further. The idea that the Borg have a hive mind is interesting but taking that a step further and acknowledging that the identities of the assimilated victims are stored in some sort of Borg Database is both intriguing and frightening. 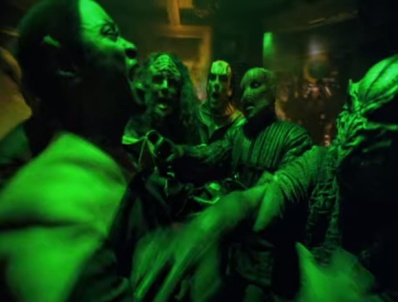 Think about the implications of this revelation. Every single person that is assimilated still exist in a system suffering for eternity while their body is utilized by the hive mind run by the Borg Queen. This is paramount to that of a digital hell insinuating that if you become Borg, even if you die as a drone, your personality and, well, soul could suffer for eternity within the minds of the drones. This revelation adds an even more insidious level to the Borg and their assimilation procedures giving us even more of a reason to both hate and fear these beings. It also makes you wonder…is there a version of Picard still suffering inside the Borg hive mind never able to be free while Picard himself continues on without knowing the other even exists?

Overall, this is a tremendous episode and one of the strongest featuring our resident Borg. Not only do we get a deeper exploration of Seven’s character and background but we get to see an early relationship begin between her an Naomi Wildman. This simple relationship sets the groundwork for some excellent stories to come…including the discovery of Borg Children…but we are getting well ahead of ourselves there.

Thanks for reading the Retro TV Review, I look forward to discussing the rest of the series with you, one episode at a time every Monday, Wednesday and Friday! Next Review: Nothing Human
For more reviews: check out the weekly series called Key Movies Of My Life that comes out every Thursday and for more retro TV goodness check out the rest of the Retro TV Reviews here.