It’s a Boxing episode…That’s really all you have to know.  Originally broadcast on March 24, 1999 this is The Fight.

Voyager is trapped in Chaotic Space and Chakotay is fighting for his life while also fighting in his head as he fights for consciousness in an episode called The Fight.  It’s a metaphor thing. 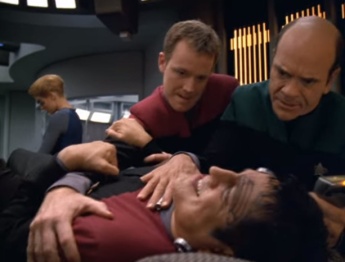 No really, this episode is as chaotic as the space they claim to be in.

In a nut shell Voyager is trapped in Chaotic space and are trying to get out while Chakotay is trying to communicate with these aliens through a neural link and the only way to do that is through the metaphor of Boxing.  So they keep him alive to fight through his mental battle as the ship fights through chaotic space only to learn that they need to punch their way out of chaotic space or somesuch.  In the end they make it out and resume course because of course they do.  Then Chakotay goes to the holodeck to do…more boxing, because of course he does.

I can see what they were trying to do here and that was to give both Voyager and Chakotay a Darmok moment but frankly…it doesn’t work.  This is a broken haphazard episode that just doesn’t work at really any level.  I mean, the cast does a good job with the material they have but the episode just falls flat despite their best efforts.

There really isn’t anything else to be said about this one….I mean, Boothby is in it and we learn that Chakotay used to box as a cadet.  So….there is that.

Okay, lets move along shall we?

Thanks for reading the Retro TV Review,  I look forward to discussing the rest of the series with you, one episode at a time every Monday, Wednesday and Friday!  Next Review: Think Tank