The Twilight Zone has been a mainstay for me for most of my life.  Along with Star Trek, The original Twilight Zone series was a one that I would watch regularly with my dad. Every night in syndication we would watch another of Rod Serling’s classic tales and I would find myself swept into another dimension, a dimension not only of sight and sound, but of mind.

Fast forward 60 years later and once again the journey into imagination has returned.  This time however, writer Director Jordan Peele is at the helm and, after two successful films, he takes on the classic that started sixty years ago.

So, let’s explore the latest episode of  The Twilight Zone, The Wunderkind

John Cho stars as an expert campaign manager who, after a political disaster, finds a new person to promote, an 11 year old kid named Oliver. Soon, the child is elected and they soon discover the tragic mistake they have made.

Imagine a child being elected as President of the United States of America.  Well, depending on how you lean politically you may not have to actually imagine that but we are not here to discuss real life politics, only the kind that takes place in the Twilight Zone.  In today’s episode the question is posed, what would happen if a child ran for president and actually won?  How would the world react,  how would the kid react? A deeper question is, who would be responsible for his actions when he was in charge of the country?

At first glace, the story seems to be a jab at the current political climate with the absurdity of how unqualified people can get into any office.  It takes this theme to the Nth degree when the most unqualified person in the country, an 11 year old you-tuber named Oliver, takes the highest office in the land.  At first, his campaign seems genuine, he is a kid who cares for everything and everyone, he only wants people to be happy and wants to end all wars.  Heck, the kid want’s to give everyone free video games!  It is when he is put into power that things become clearly uncontrollable and this is where the episode derails.

The Twilight Zone has always been a series with a deeper meaning behind it’s horror and scifi tales.  It is known for taking things to an extreme but, even in those extremes, the past series have always managed to remain just on this side of the suspension of disbelief.  You had no reason to doubt that William Shatner saw a gremlin on the plane or that a child could hold people hostage using only his mind, but in The Wunderkind, the suspension of disbelief is stretched just a little too thin for such a mature series to bare.   I wont ruin the rather forced twist for you but nothing in this episode makes sense and, maybe that is the point. 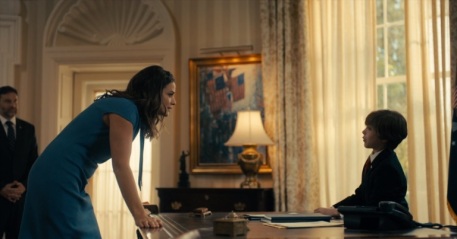 While, on the surface, the lesson in the episode is about the absurdity and gullibility of the masses, using a farcical election as it’s premise. The real lesson could be one of blind faith. Too many times we take a popular person’s public opinion for gospel while that person has ulterior motives that go unchecked by those that put them into power.  It is this blind faith that has tanked businesses and has even allowed entire nations to fall. During this episode we see first hand how this child’s mindless demands are met with a level of blase.  The adults seem to be okay with this child turning the White House into a playground and threatening to destroy companies for not giving away free things.  When confronted they toss out buzz words like treason and unpatriotic.  If taken from that approach, it may be heavy handed but it is also genuinely frightening.

Overall, this is an absurd and frankly ridiculous episode that feels like it is better suited to a kids channel than on the revival of The Twilight Zone.  It is obvious what they are trying to do here but they really don’t need to be so loud in their execution. It is the subtle stories that work best and this one is far from subtle.  Better suited for Are you Afraid of the Dark than Twilight Zone, this is by far the weakest in the series so far. What makes this even more tragic is that it totally wasted the talent of John Cho who was constantly upstaged by the bratty kid President played by newcomer Jacob Tremblay.  Now Cho understands how Sinbad must have felt in First Kid.  Thankfully, we are only five episode in so they have plenty of time to make up the lost ground.  Besides, we already have a kid president so why try to make another one?