When your entire life’s purpose is called into question, how do you react? How do you accept that maybe you need to find a new purpose in life in order to find peace with yourself and those around you?  In the episode that originally aired on April 25,1993, Major Kira Nerys must face these and other difficult questions in the episode called, Battle Lines.

Kai Opaka, Bajor’s religious leader, visits the station and requests a trip through the wormhole.  Unfortunately tragedy strikes when the Runabout they are in crashes on a small planet where the native population are doomed to fight…forever.

Kai Opaka arrives on the station for a visit with the Emissary, Benjamin Sisko, and a tour of the station and the wormhole.   After entering the Wormhole,  Sisko and crew detect an interesting signal on a nearby moon.  At Opaka’s request, they begin investigate only to end up crash landing on the moon below after being attacked by one of the planets satellites.  Upon waking, they discover, much to Kira’s dismay, that Kai Opaka did not survive the crash.  Despite their loss, they soon find that they are not alone on the planet.Back on the station, the it soon becomes apparent that there is a problem when the Runabout is three hours late for their scheduled return.

Captured by what appears to be a local military outfit,  Sisko is interrogated by the Ennis leader Golin Shel-la.  Golan indicates that his people are prisoners on the moon and in an ongoing war with the Nol-Ennis.  Sisko volunteers Bashir’s medical assistance for their wounded and, just as they begin to settle in, the camp is attacked by the Nol-Ennis.   With much of the Ennis hurt, Bashir begins to help the wounded.  Soon they are visited by none other than a resurrected Kai Opaka.

Bashir can not explain the sudden resurrection of the Bajoran spiritual leader. Although he can detect a bio-mechanical substance in her system, he can not tell how she has been brought back to life.  As they begin investigating the recently killed Ennis, the dead begin to awaken before them.  It appears this is more than just a penal colony. Golin indicates that he has died too many times to count and this resurrection is all part of their punishment.  The crimes of the Ennis and the Nol-Ennis were their inability to find peace between them.  The leaders of their planet sent the warring factions to this moon in order to be an example to others from their planet.  This war has gone on with the same people for what could have been centuries at this point.  Sisko volunteers to help end the nightmare by freeing both factions from the moon under one condition, the Ennis and the Nol-Ennis must reach a ceasefire.

Golin reaches out to the Nol-Ennis leader Zlangco to propose a cease-fire but, of course, negotiations break down before they even begin causing the Nol and the Ennis to resume fighting. Just as things begin to get bad, Bashir save Sisko informing him that he doesn’t want to die on this moon, if they do…they will never be able to leave.  It seems that, upon death, the body is infected by microbes that are designed to revive anything living over and over.  Environmentally specific, anyone infected can not leave the moon or they will be dead forever,  this includes the recently slain Kai Opaka.

Dax and O’Brien enter the wormhole to search for their missing ship. As they begin their search they discover that Sisko’s runabout has crashed on a moon that is covered in a protective shield made up by a series of satellites.  Upon arriving, O’Brien discovers that he needs to disable the satellite network in order to rescue their people below.

Kai Opaka, without the knowledge of her plight, indicates that she needs to remain behind to assist the Nol and the Ennis to find peace.  She indicates that she was brought there to begin their healing process and she knew upon entering the wormhole that she would not be returning to Bajor. These people have only known pain and suffering, making them only know death this entire time.   Bashir proposes a way to end the war by disabling the microbes that have infected the people on the moon.  Just as he indicates his intentions he realizes that nothing would come of this change and would only cause the deaths of the people there.   Sisko, Bashir and Kira say farewell to Kai Opaka as they are beamed away by Dax and O’Brien. 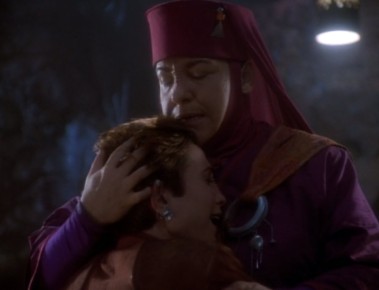 This is a very important episode for Kira Nerys and her character development.  In Kira’s heartfelt discussion with Kai Opaka, Kira realizes that the ongoing battle between the Nol and the Ennis in many ways represents the internal struggle she has been facing. The loss of Opaka opens that wound up allowing Kira to see who she has become. It soon becomes clear to Kira that her days as a freedom fighter is still with her and she can not escape the war she has faced for so long.    She is still angry and is having a difficult time accepting the chance of peace for Bajor.

To Kira, her entire purpose was to defend Bajor against Cardassians and, now that the threat has all but passed, she finds herself lost and purposeless.  This is a common issue with people who make their life purpose a singular goal.  Once that goal has been reached, they no longer feel useful and begin to try to find ways to make their purpose mean something again, even if that becomes a self-destructive action.

This feeling of duty and purpose reminds me of the story of Japanese Lieutenant Hiroo Onoda.  Lt Onoda was sent to the Philippines during WW2 in 1944 with one order, never surrender.  This one purpose was taken to heart and, even when the war ended in 1945, Onoda continued to fight anyone who came close to their occupied territory.  For the next 30 years Onoda and his men remained in hiding, stealing from locals and firing on anyone who came near.  It wasn’t until 1974 when a Japanese world traveller named Norio Suzuki found Onoda that Onoda finally acknowledged that the war was over.   However, even though he returned to Japan soon after, he would find it hard to accept that things had changed and his life as a warrior was no longer needed.

Kira, in a way, is in a similar situation as Onoda.   Finding herself in a new world after fighting since childhood, she is discovering that she must either change or reject the new status quo.  To accept it means to rediscover the person she is and allow herself to let down the walls she has built to protect herself, to reject it means to continue fighting a battle that will ultimately only destroy herself.

It is rare we get this deep of a story arc for a character in any series but Kira’s battle with her purpose and identity is far from over. Actor Nana Visitor does an incredible job depicting this character through her journey.

Kira learns that she was considered a ‘minor operative whose activities are limited to running errands for the terrorist leaders‘ in the official Cardassian files that were left aboard the station.  Needless to say, she is displeased.

There is a moment where Opaka gives O’Brien a necklace for his daughter.  This necklace is never mentioned again but it is strange that she knew he had a daughter having never met him nor his child before. You have to wonder what the writers were setting up that never was explored.

With Kai Opaka’s departure from Bajor, this opens up a major role for the Bajoran People to fill…I wonder how that will play out…

Although she does return in a way, we never really find out what happened to Opaka and her time with the Nol and the Ennis.  It is assumed that she lead them to peace, but never confirmed.

A keen eye will recognize actor Jonathan Banks as Shel-la.  Banks has been a sci-fi and movie staple for many years.

Thanks for reading the Retro TV Review,  I look forward to discussing the rest of the series with you, one episode at a time every Monday, Wednesday and Friday!  Next Review: The Storyteller