Aliens invading the station’s systems, Ambassadors being difficult and a certain changeling facing his true self….originally airing on May 16,1993 this is The Forsaken.

An alien computer virus takes hold of the station causing it’s systems to go on the fritz, meanwhile Lwaxana Troi is paying a visit.

A delegation of Federation ambassadors are visiting the station and Sisko assigns Doctor Julian Bashir to take care of them.  Bashir soon finds himself knee deep in the dealing with three of the most insistent high strung ambassadors when another yells out that something has been stolen.  We find none other than Lwaxana Troi who is complaining that her latinum broach has been stolen.  Just as things begin heating up, Odo arrives and deduces that a shifty Doptarian has committed the crime. Arresting the alien and reclaiming the stolen broach, Odo has attracted the attention of one very lonely Betazoid Ambassador. 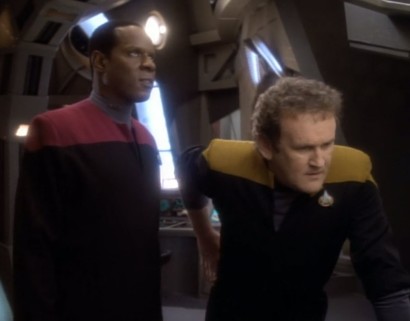 In Ops, Chief O’Brien argues with the stations system, finding it very difficult and unruly.  Sisko arrives just in time to find his Chief of Operations on the edge of a breakdown over the Cardassian computer system.  Sisko encourages his Chief to do what he needs to when the Ambassadors arrive, insisting they are allowed to see Operations.   Soon the wormhole opens and a strange probe arrives which peaks everyone’s interest.

Meanwhile Odo is visited by Lwaxana who is clearly interested in the shape shifting Constable. Seeing a man she is interested in, she comes on to him with the full power of Lwaxana Troi.  Realizing he is facing a no win situation, Odo flees to Ops to have a talk with Commander Sisko.   Odo, never having faced someone like Lwaxana, discusses the matter with his Commander.  Sisko suggests that his Security Chief ‘let her catch’ him since she is certainly on the hunt.  Odo formally requests that Sisko intervene on his behalf but, must to Odo’s dismay, Sisko declines his request. 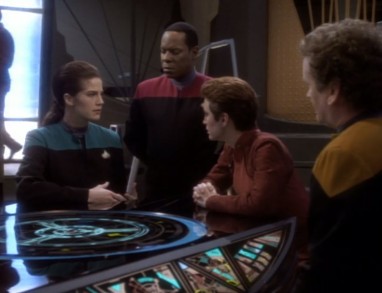 Odo runs into Lwaxana and although he attempts to run, he is trapped in an elevator with the Ambassador.  Just as he explains that he is not really a solid person and is not interested in eating with her, the turbolift comes to a halt and it seems that our shapeshifter is genuinely trapped with the woman he is trying to avoid.   Lwaxana, of course, finds this a perfect situation.

In Ops, everyone begins working on rescuing Odo and Lwaxana but no matter what they do, they cant seem to find a way to get them out.  Even though Odo would prefer silence, Lwaxana tells Odo that she needs to talk.  Regaling Odo with events of her past, including the events of the STNG episode Menage a Troi. 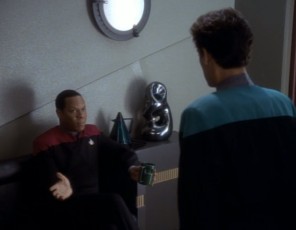 Julian begs to be released of his Ambassador Babysitting Duty, and much to his dismay Sisko denies the request.  As Julian sulks out of the room, O’Brien indicates that there is something different about the computer system.  He feels like, since connecting with the probe, something has made a change that only he has noticed.  He indicates that it is almost as if the computer doesn’t want him to leave as every-time he does, something new breaks down.   As they investigate further, O’Brien suggests uploading the probes files back to the probe in order to send this baby on it’s way.  O’Brien tries to upload the files only to trigger a power outage across the station. Realizing they must overload the system and distract the entity that is living in the system as they remove key systems essentially corralling it into a specific area.   Just as they manage to get it cornered, an explosion occurs putting Julian and the remaining ambassadors in danger. 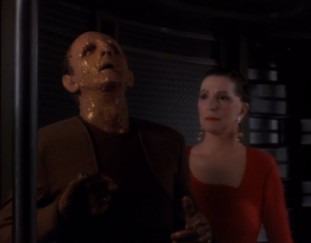 Still trapped, Lwaxana and Odo begin to talk with one another, getting closer and closer in a mutual understanding.  It soon becomes apparent that Odo is feeling ill due to holding his form for too long.  Embarrassed, Odo tries to hide his natural state from Lwaxana only for her to show him her natural state as well.  It seems that Lwaxana hides her true form as well and shows him that she wears a wig.  He finally realizes that she is a genuine person and is convinced to let himself turn into his natural form in order to regenerate.

After O’Brien finds a way to restore the power by sending the alien entity to a ‘doghouse’, Odo and Lwaxana emerge at the same time Julian and the Ambassadors are saved.  The alien entity now live in a subroutine in the system, almost as a pet.

I am of mixed feelings when it comes to Lwaxana Troi episodes. At first it seemed a little forced to have Lwaxana invade DS9, but the more I thought about it, it really made sense.  With Lwaxana being an ambassador, she would certainly travel to many places outside of Betazed and The Enterprise, so it only makes sense that she, being the holder of the sacred chalice of reeks…yada yada, would want to experience the wormhole first hand.  I mean, that’s what a Federation Ambassador does right?  Goes places and gets in peoples way?  heh.

This one, however, really gives Lwaxana a chance to shine.  This is a character that has been well underused and, when used, was presented as more of a ‘difficulty’ for Picard and Deanna Troi on the Enterprise.  There were a few gems in that series with her as the subject but it was not until the end of her time on the show that we really got a chance to see the depth that Lwaxana had.   This first appearance on DS9 expands on that and really gives her some much needed depth.

This is the Lwaxana from ‘Half A Life and Dark Page‘, the Lwaxana who has become more than just a comedic foil but a genuine caring person who can be the best version of herself in the most trying of circumstances.

We also get a little deeper look into Odo and his past.  Learning that much of his demeanor is due to his treatment at the scientist that discovered him.  He is ashamed of his liquid form as he was treated as more of a novelty in his past than the respected lawman he is now.   Deep inside he fears that he is only seen as useful due to his abilities and this bothers him greatly.

The main story itself is pretty forgettable.  An alien entity wreaking havoc in the systems.  ho hum, it’s not like O’Brien wouldn’t eventually figure that one out.  The other sub sub plot of Julian and the Ambassadors was also a quick coat of gloss but all in all, not a bad entry into season one of Deep Space Nine. 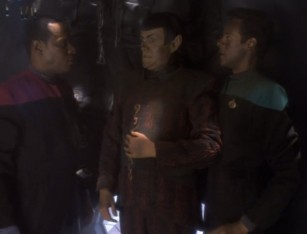 This is not the last time we see Lwaxana on the station.

We get some great character development for Odo as well as a hint of what is to come for Bashir.

Odo smiles again,  this is number 3!  hmmmm, I wonder how many times this changelings smiles in this series…

We never do find out what the alien entity was or even what happened to it.  Apparently it’s still living in that dog house O’Brien made.

Thanks for reading the Retro TV Review,  I look forward to discussing the rest of the series with you, one episode at a time every Monday, Wednesday and Friday!  Next Review: Dramatis Personae