Initiates, proto-universes and Cardassian Voles.   All in a day in the life on DS9.  Originally airing on February 27, 1994, this is Playing God.

Story A: The Initiate 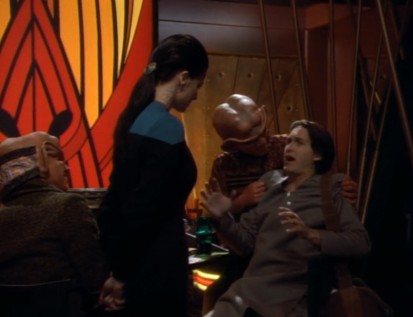 Julian Bashir escorts Arjin, a young Trill candidate, onto the station and takes him to meet Jadzia who happens to be playing Tongo in Quarks Bar, much to his surprise.

The next morning the young initiate reports to Jadzia’s quarters only to be confronted by an alien man named Trajok. Arjin soon finds himself confused by his mentor’s actions as she is not at all what he was expecting.  She soon introduces her initiate to the ops team where Miles is hunting Cardassian Voles with Kira.  Soon after, they head to the Gamma Quadrant to go on a mission and get to know one another.

On the journey, Jadzia makes it clear to Arjin, that she is not Curzon and has no plans to make his initiation difficult on him.  They soon collide with an unknown subspace inter-phase pocket that causes their runabout to stop in it’s tracks.  Limping their way back to the station, Dax has the subspace seaweed beamed to her science lab to investigate. 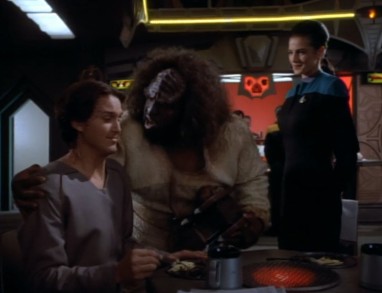 As repairs are being done on the runabout, Dax takes Arjin to dinner at her favorite Klingon restaurant.  There she finds the young man very uncomfortable in the situation. Dax soon learns that Arjin isn’t there for himself, but there to make her father proud as his fathers dying with was to have his child joined with a symbiont. She is unimpressed.

Dax visits with Sisko where she makes it clear that the young man isn’t ready.  Arjin is riding his fathers ambitions but Sisko informs Jadzia that she needs to confront this young man soon or he will never be chosen.  She wants to avoid treating Arjin as Curzon treated her but she is starting to learn that maybe the old trill had his reasons.

Meanwhile, the Cardassian Voles accidentally free the subspace seaweed in the science lab.

Dax discovers the incident and begins investigating the newly freed subspace inter-phase pocket. While working on the issue, Arjin begins to defend himself and his statements the previous night.   Dax makes it clear that she is worried that Arjin is not preparing himself to being joined to his dismay.   As they discuss the situation, Arjin lashes out at Jadzia accusing her of being unqualified herself and storms away.

Jadzia informs the Ops team that the subspace seaweed is a proto-universe which is slowly displacing their own universe as it grows.  It seems they can not take the proto-universe back through the wormhole without causing a massive explosion but they may be able to contain it.  Evacuating the area, they begin preparations to force it to implode.

In Quarks Bar, Arjin is drowning his sorrows in liquor.  There he takes advise from Quark who tells him of his time as an apprentice himself.  He tells Arjin that this is his one shot so he needs to not screw it up.

Dax soon discovered that the proto-universe is growing faster than expected and it appears that life has already started to form in the proto-universe and should they destroy it, they could be killing entire civilizations.  After debating whether they should still destroy the proto-universe, they soon decide that they need to take it back through the wormhole but need someone who can avoid the verteron nodes in order to avoid a catastrophic explosion.

Jadzia visits Arjin at the bar where he is still drowning his sorrows and informs him of how she ended up being joined.  She explains that Curzon made her life hell, causing her to doubt herself in every way.  Because of Curzon’s suggestion that she not be joined, she doubled her efforts.  She tells him that Arjin must make up his own mind to be joined and not base it on his fathers will.   She then asks the young initiate to join her on her mission through the wormhole as he is a level five pilot and their best chance to make it through alive.

Back on the station, Dax informs Arjin that, while she cant recommend him for the program, he can still make it if he applies himself.  Although dissapointed, he understands and they part ways.

Miles O’Brien is tracking down a system issue caused by Cardassian Voles.   Determined to get rid of them he begins trying everything possible including a high pitched sound that causes a certain Ferengi bartender some serious pain.

O’Brien contacts a Cardassian Gul for help but to no avail, only receiving a gag gift from Julian in the form of a flute.  Maybe he can play them away like the pied piper. 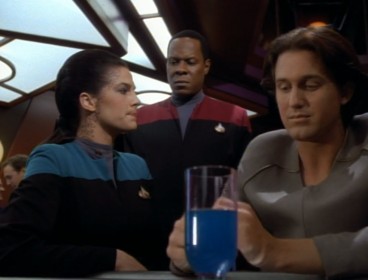 This is a wonderful episode that really gives us more of an insight into Jadzia and what she went through to become joined with the Dax symbiont.  The writers could have easily given us all of this background through flashbacks or even just a side line of dialogue but instead they gave us our first deeper look into how a Trill is chosen to be joined.   In this, we found that the unjoined host Jadzia was not the tough and confident woman she is now, in fact she was quite and very meek.  It was only due to Curzon’s abuse as a her field docent that she found the courage to step up and take her place among the joined. We find out later in the series more on this but I wont go into more detail until then,  Spoilers and all.

One aspect of the story I loved was the dilemma Sisko had with the proto-universe and whether to allow it to be destroyed or not.   His encounter with the Borg not only changed his outlook on life with the death of his wife, but also gave him an insight on how he needed to act toward other lifeforms as well.  One of his biggest concerns was that he did not want to be uncaring like the Borg were when faced with deciding if their lives were greater than the life forms they detected in the proto-universe.  In the end he chooses to risk it all to save these beings, making him the better person.

The thing that bothers me about this episode is how the heck did taking a proto-universe back to the gamma quadrant prevent it from destroying the universe? I mean, they made it clear that the proto-universe was displacing our own and, last I checked, the Gamma Quadrant was part of our universe, heck it is even part of our galaxy so what did they do when they ‘put it back where it belonged’ and how did they figure out how to do that in just the short time before it expanded.   The episode doesn’t go into any detail other than implying that they just dropped it off and left it to do its thing.  Makes no sense but I guess this is where the suspension of disbelief comes in plus, I don’t think we were supposed to notice that little plot hole.

We find out about Mardah, the Dabo girl Jake is dating.  This isn’t the last time we hear about Mardah and we do get to meet her as well.

We never see nor hear from Arjin again.  I am assuming he went on and did stuff.  I doubt he was joined with a symbiont though.

This is the last time we see the Klingon Chef,  shame really, I wish Worf had gotten to meet him.

We never find out what happened to the proto-universe.  My bet, that new universe is how Star Trek Discovery came about, or maybe the JJVerse, somewhere in there is the Terantinoverse as well.  just sayin’.

Rule of Acquisition #112 Never sleep with the bosses sister.    It seems Quark learned that lesson the hard way.

Thanks for reading the Retro TV Review,  I look forward to discussing the rest of the series with you, one episode at a time every Monday, Wednesday and Friday!  Next Review: Profit and Loss