A new Kai is about to be chosen and of course, things do not turn out as you would expect.  In the episode that originally aired on May 22,1994, this is The Collaborator.

As the election for the new Kai seems locked in for Vedek Bareil,  evidence comes to surface implicating Bareil as a Cardassian Collaborator during the Occupation of Bajor.  Knowing that Vedek Winn must be behind it, Kira begins an investigation.

We open with Vedek Bareil walking through an empty Deep Space 9 coming across the hanged body and Kira playing ball in Quarks Bar. Kira cuts the body down only to discover that it is his own body after believing it to be Prylar Bek.  As the Orb Experience ends, Bareil closes the case and looks concerned. 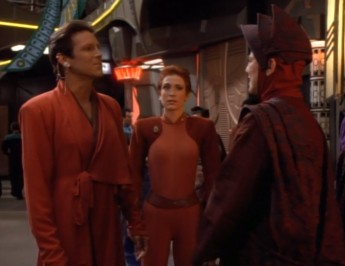 In Kira’s quarters, Vedek Bareil talks with her about the upcoming election.  They are clearly in a deep relationship and she tells him that he is a shoe-in for the position of Kai.   After their time together, they find Vedek Winn telling a group of children that they need to love the Prophets so that the Prophets love them in return.  Winn is certain that the election of Kai is far from over and that Bareil must keep that in mind.  Kira and Winn clearly do not get along and Kira ensures that there will be enough security to avoid the violence that befell the station the last time Winn was present.

Nearby, on the Promenade, a Bajoran recognizes an elderly  him to be the Collaborator Kubus Oak.  Odo intervenes confirming the man’s identity and quickly arrests him.

In another Orb experience, Bareil finds himself elected Kai and comes face to face with Kai Opaka.  She advises him to be strong, understanding that all is as the Prophets will it to be.  She asks him to walk in her path but it is a narrow one.  Soon he comes face to face with Prylar Bek who and him a snake.  Upon accepting the snake, Bareil finds himself holding a noose. 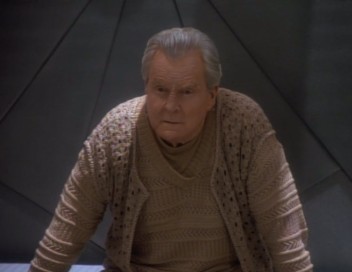 Odo visits Kubus in security where the old man claims that he was serving the only recognized government on Bajor during the time of the occupation.  He doesn’t see his position as a collaborator and has come back to return home after spending his life on Cardassia.  Kubus requests to be allowed to return only to find himself refused by Kira who informs Kubus that all collaborators have been banished from Bajor.  He was the man who sent many Bajoran workers to death in labor camps and he did nothing to stop it.

Vedek Winn pays a visit to Ben Sisko where she tries to gain favor with the Commander even though, on her last visit, she claimed he was dangerous to Bajor.  She asks him to join her in the Vedek Assembly to announce their renewed friendship when he informs her that he will be waiting until AFTER the election of the Kai.  She is pleased to find out that Sisko will be staying out of the election as it is an internal Bajoran affair.

Just after, Kira learns that Winn has granted Kubus sanctuary on Bajor despite his collaboration with the Cardassians. Stopping Winn’s ship from leaving, she informs Winn that she can not take Kubus with her as he falls under the Ilvian Proclamation.  She tells Winn that she can not leave either until her ship undergoes a massive scan that may take weeks.   Winn then informs Kira that Kubus has agreed to give evidence that Vedek Bareil was the man who was truly responsible for the Kendra Valley Massacre, the same massacre that killed Kai Opaka’s son.  Using Kira’s determination to find the truth against her, Winn asks Kira to find out the truth in Kubus’ claims.

Kubus claims that Bareil visited Bek just prior to Bek’s suicide after the Kendra Valley Massacre.   Kira doesn’t see this as evidence of Bareil’s collaboration but is now responsible to investigate the situation.  Contacting Bareil, she asks him about his visit with Bek, of which he fully admits that he was there.  Bareil refuses to reveal anything Bek said as Bek was a monk who asked for spiritual guidance. 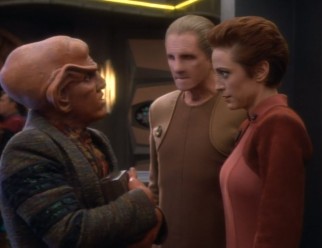 Furthering her investigation, Kira visits Odo who tries to find records that will exonerate Bareil.    During the conversation, she tells Odo that she is in love with Bareil and hopes that he is innocent.   In their investigation, they find that the Vedek assembly logs have been sealed indicating that something is amiss.  Going to Quark, they approach the Ferengi Bartender to assist in the investigation by unlocking the Assembly Logs using the methods they know he has at his disposal.  He reluctantly agrees asking Kira and Odo to leave while he works his magic. Soon he reveals that the secure files they are after are missing, presumably erased.

Going to O’Brien, Kira asks the Chief to see if he can recover the files.  He indicates he cannot but is able to discover who authorized the deletion of the files.  Much to Kira’s dismay, it is Vedek Bareil himself.

In Another Orb experience, Bareil finds himself as Kai and is confronted by Bek.  He soon finds himself in the embrace of Vedek Winn who tells him he will be rewarded.  Soon he comes face to face with Kira who stabs him in the stomach causing him to fall into Kai Opaka’s arms.

Kira arrives as soon as the Orb Experience is over and tells him what she has found.  He asks her to not make him tell her the truth of what occurred.  She believes that he is responsible for the deaths of Kai Opaka’s son and the members of the Kendra Valley base.  He tells her that he had to tell the Cardassians the location of the base or they would have massacred many more than just that base.  It was for the greater good and he had to live with that.

Afterward, Kira contacts the Vedek Assembly and informs Winn of what she has learned.  Winn is elated to learn that Bareil has withdrawn his name from the race to be Kai and she is certain that she will win. (would you call that a Win Winn situation?)

After finding out what has occurred, Kira is shocked that Bareil has withdrawn his name.  She soon discovers the truth for herself and heads to Bajor where she finds Winn is the new Kai.  Kai Winn approaches her under a false tone of modestly claiming to be her friend.

Kira confronts Bareil and informs him that she has found the proof that he was not a collaborator. In fact, he was covering up for someone else.  After pressing him, he admits that it was Kai Opaka herself who betrayed them all, sacrificing her own son in order to save many more.  Now Bajor has a new leader who is not worthy and they will have to do all they can to help keep Bajor on the righteous path.

Wow.  This one really hits home with how the political nature of the world has gotten in recent years.  Backstabbing, digging up dirt,  Fake News,  this episode had it all in a way that was almost prophetic.

To me a good Star Trek episode is one that really explores the human condition even when it focuses on Aliens and other cultures.  In this case it is about doing what is right, even if it means sacrificing everything.  Vedek Bareil knew that, should he expose Kai Opaka to clear his name, the very position he was up for would be undermined in the blink of an eye.  In order to avoid that from happening, he allowed someone to take the position with the hope that he could sway her from going to any extremes, one way or the other.  This is a great example of the Vulcan saying, The needs of the many outweigh the needs of the few or the one.  In many ways, Bareil is a hero, but sadly, his efforts do not prove to be as fruitful as he had hoped, but I am getting ahead of myself.

This was also a great episode for Kira and her relationship with Bareil.  Although it was more than obvious they were in a relationship, this is the first time we hear that she is actually in love with the Vedek.  Not an easy thing for Kira as she has been fighting her entire life with no time to settle down and actually form a relationship with anyone. It is devastating to her when it appears the person she loves is himself a collaborator and that she will have to give up her own happiness to expose him as such. Unfortunately for her, she was just being used by his opponent to allow for Winn to succeed in gaining the title of Kai. I have to wonder how many Bajoran’s just didn’t vote when Bareil stepped down from the race.  I bet it was somewhere around 46.9%…

We get our very first indication that Odo has romantic feelings for Kira in this one.  When Kira tells Odo of her love of Bareil, he is, for the first time in the series, rather thrown off.  These emotions toward Kira would later be confirmed but not for a bit.

The Election of Kai Winn will have lasting consequences for Bajor and Deep Space Nine itself.  This episode marks a major turning point for the series, one that will have ramification until the series finale.

#285  No Good Deed Ever Goes Unpunished.

Thanks for reading the Retro TV Review,  I look forward to discussing the rest of the series with you, one episode at a time every Monday, Wednesday and Friday!  Next Review: Tribunal