Although we are done with DS9 and have travelled back to the past with Enterprise, that doesn’t mean you can’t go back and catch up on the episodes you missed.   You can find the rest here!

Children and familial connection are the subjects of today’s episode.  Originally airing on January 27,1997, this is The Begotten.

After receiving a sick infant changeling, Odo becomes determined to teach it how to shape-shift.  While Odo deals with a child of his own, Kira goes into labor.

Story A: The Changeling 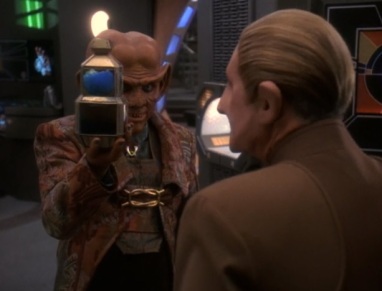 Odo finds himself in the infirmary complaining of back pain. Bashir informs the former shapeshifter that he now has to act like a solid and take care of his body.  Soon Quark arrives and informs Odo that he just bought a baby changeling from a trader.  Odo agrees to purchase the sick changeling from the bartender and realizes he needs to find out how to take care of this new being.

Odo explains to Captain Sisko that The Founders sent their children out among the stars to see how other beings treated their young.  Odo was once like this one that they found and asks Sisko if he can help teach it how to shape-shift.  Sisko agrees and suggest that he bring Odo’s old mentor, Dr Mora, on board to assist.

After Bashir cleans the radiation damage from the baby shapeshifter, Odo begins talking with his new charge.  He informs the child that he will do everything he can to make it comfortable in it’s new life. Soon, however, he is greeted by Doctor Mora much to Odo’s dismay.  Mora explains that he learned about Odo and his ‘find’ causing him to want to give the Constable his assistance.  Immediately, Mora begins to try to investigate the baby changeling upsetting Odo. However, It soon becomes clear that Odo could use some of Mora’s expertise and reluctantly agrees to let the Doctor assist but only as an observer.

Odo continues to try to coax the baby into new forms by pouring it into different shapes.  After a week, It soon becomes clear that Odo’s efforts are futile and the two begin arguing over the treatment of the baby shapeshifter.  As their argument gets heated, they are greeted by Captain Sisko who informs them that Starfleet wants to see results and expects Odo to make contact with the changeling baby as soon as possible.  Odo realizes what kind of pressure Doctor Mora felt under the Cardassian regime and reluctantly agrees to let his old mentor work with him to get the changeling to shape-shift. Soon, they begin to see results much to Odo’s excitement.

As they continue to work on teaching the new changeling how to hold shapes, Odo learns that Mora was heartbroken when Odo left him in the past.   They are soon shocked when it attempts to contact them by forming Odo’s face for a few seconds.  Mora tells Odo that this changeling is developing far quicker than Odo did.  Mora is impressed that his ‘son’ has formed a connection with the baby.  Celebrating, Odo soon finds himself in Quark’s bar pouring drinks for his Ferengi friend.  Odo is happy and Quark finds it hard to accept this new version of the Constable.  Just as he begins to celebrate, the computer warns him that something is wrong.

Returning to the Infirmary, Mora and Odo discover that the baby changeling is dying and it seems the radiation it had originally been exposed to damaged it more than they thought.  In a mad rush, they try to save the sick child but soon discover that it is too late to do anything.

Odo, distraught at the thought of losing this child holds it in his hands to give it comfort in it’s final moments.  Pleading with it, the child dissolves into Odo giving the Constable a final gift. Odo is once again able to shape-shift.  Taking the form of a Tarkalean Hawk, Odo flies around the promenade.  Saddened that the infant gave it’s life for him but thrilled to have his abilities back, Odo sees Doctor Mora back to Bajor with a hug.  Odo finally understands the connection Mora had with him and welcomes the Doctor into his life.

Story B: The Birth

The big day has arrived and Kira begins to go into labor.  The O’Brien’s find themselves helping in a Bajoran ceremony to help relax Kira.  Soon Shakaar arrives disrupting the rhythm they had just gotten into. They are soon informed that Kira’s labor has been delayed as she can not get relaxed enough. Much to her dismay, she learns that it could be days or weeks before she has the child.

Before long, Kira goes back into labor.  After Shakaar and Miles argue over who can see the birth, they are both kicked out of the labor room.  Before long, Kira has the child and the O’Briens welcome Kirayoshi O’Brien into their family.

Later, Kira realizes that, while she only had the child to help the O’Brien, she now finds herself wishing that she could be a bigger part of his life. 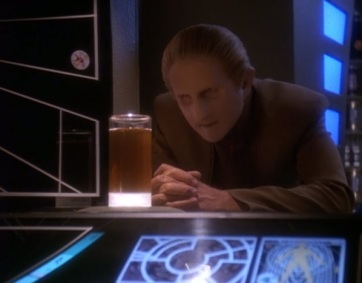 From the moment Odo was turned into a solid, a timer began.  We all knew that eventually Odo would have to become a shapeshifter again we just didn’t know how this would happen.  Surely the founders would take pity on him or Bashir would discover a way to reactivate the shape-shifting abilities but no, it was even simpler than that.  Due to his pure acts of kindness toward an infant shapeshifter, Odo was able to regain his abilities through a final sacrifice from that child.  It is possibly one of the most bittersweet moments in Star Trek history echoing the death of Kirk’s Son David and even the pain we felt when Lal passed away on STNG.  While we only got to know the Infant Shapeshifter for a short time,  it’s legacy has a monumental impact on Odo and even Dr. Mora for the rest of their lives.

It is interesting to note that this episode is all about children from the birth of Yoshi O’Brien to the bitterness Odo harbored for his ‘father’ Dr Mora.  In a way, this episode give us a broad view of the parent child relationship through the eyes of multiple characters.  For Odo, he has harbored dark feelings about Dr. Mora for most of his life.  To him, Mora gained a sadistic pleasure in the experiments that Odo underwent while in his gelatinous state.  It is through his experience with the Child that Odo begins to realize that Mora was doing all he could with little experience to go on.  All along Odo had been judging Mora from a perspective that Mora ‘should have known better’ not realizing that Mora was literally doing the best he could at the time.  Odo soon realizes that it was due to Mora’s work that Odo became the man he is today and, upon that realization, Odo finds peace with his ‘father’ that he has denied himself for much of his life. This moment gives us some major character development for Odo making him an even deeper character than before.  Interestingly enough, it also provides some closure for Odo in both finding peace with his father and also finally regaining his abilities.

On the flip side, we have seen Kira dealing with her pregnancy with Yoshi for most of the season so far.  In that time she has made it clear that she is nothing but a surrogate mother helping the O’Brien’s out in their time of need.  However, it soon becomes aparent that Kira is much more connected with this child than she believed she would be giving her a sense of loss when the O’Brien’s take the child home.  In a way both Kira and Dr Mora have a connection of their own.  Dr Mora felt this same loss when Odo became bitter and left him, never attempted to remain in contact. Kira now faces the real chance that Yoshi will never have a connection with her even though she is, in many ways, his mother as much as Keiko.  While I am sure the O’Brein’s will do everything they can to allow Kira to be a part of Yoshi’s life, it is unlikely they will have the Mother/Child bond that she now finds that she wants.

All in all this is one of the most touching episodes this season.  We get a chance to really see Odo and Kira have some significant character development but not based soley on their back story.  This emotional growth for both of them really sets their course for the remainder of the series and their growth is far from over. 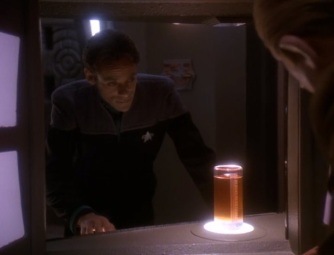 Thanks for reading the Retro TV Review,  I look forward to discussing the rest of the series with you, one episode at a time every Monday, Wednesday and Friday!  Next Review: For The Uniform