Genetic manipulation revealed and a tale of true love,  all on the episode that originally aired on February 24,1997.  This is Doctor Bashir, I Presume.

After being offered a chance to become the next iteration of the EMH (Emergency Medical Hologram) program, Julian’s past comes back to haunt him.

Story A: A matter of Genetics

Playing a game of Darts with O’Brien, Julian is shocked when Doctor Lewis Zimmerman arrives and informs him that he plans to use Bashir as the base for the new EMH program, the LMH.  Discussing the matter with Captain Sisko, Sisko agrees to allow Zimmerman to setup shop on the station.

As Zimmerman begins his setup, Julian is shocked at the level of detail they need to know about him and his personal life.  After scanning Julian, Doctor Bashir is shocked to learn that Zimmerman plans to interview friends and family concerning Bashir’s life and personality.  He soon asks Zimmerman to leave his parents out of the interviews as they have not been in communication in years.  Zimmerman, of course, takes this as an indication that he should contact Bashir’s parents immediately.

Back in the lab,  Zimmerman begins work on the LMH.  Soon he begins interviewing the crew diving into Julian’s background and finds the members of the crew very forthcoming with their answers.  during the interview process, Zimmerman invites Leeta to dinner, much to Rom’s dismay. 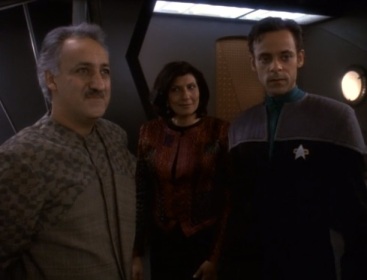 In Ops, Julian is shocked when his parents arrive quite unexpectedly.  Soon Captain Sisko has the pleasure to have a conversation with Julian’s parents where Julian learns that Zimmerman asked his parents to visit the station against his will. Furious at Zimmerman’s betrayal, Julian confronts the scientist only to learn that Zimmerman has no plans to listen to him.   Zimmerman rushes out to visit Leeta in her quarters offering her a job on Jupiter station as the head of the stations Cafe.  While Leeta is interested, she indicates that she needs some time to consider her options.

In Julian’s quarters, the Doctor finds himself catching up with his parents and he coaches them in what they should and should not say about him.  Julian tells them that they should avoid telling Zimmerman about ‘their little secret’ and it only erupts in an argument causing Julian to leave his quarters.

Julian’s parents visit the infirmary and apologize to their son and tell him that they will not say anything about his DNA re-sequencing to Zimmerman.  What they don’t realize is that it is not their son they are talking to but the prototype LMH, with Zimmerman and O’Brien listening to them in the next room.

After informing Julian of the situation, Bashir if furious at the revelation.  Zimmerman plans to file a report into Julian’s genetic engineering which could result in his dismissal from Star Fleet.  Julian comes clean to his best friend and tells O’Brien the story of how his parents decided to genetically alter their son.   Feeling that he is a fraud, Julian makes it clear that he believes his career is over and he plans to resign before being removed from service. Julian’s mother puts things into perspective for him telling him that they only wanted him to have a chance at life as he was falling behind as a child with no hope of recovery. Much to their dismay, Julian informs them that he plans to resign his commission in order to avoid any scenes.

The next morning, Julian is shocked to learn that his parents informed Sisko of the situation and they managed to meet an agreement that would allow Julian to retain his commission and medical practice.  Julian’s dad will have to serve time for his transgression at a penal colony in New Zealand.  Despite Julian’s disputes, Julian’s father accepts the agreement with Star Fleet and Sisko allows the Doctor some time to say goodbye.

In the end, Julian is pulled from the LMH program and things go back to normal on Deep Space Nine with O’Brien convinced that he has been being patronized by Julian when they play darts.  O’Brien is shocked when Julian shows him his real skills at the dart board. 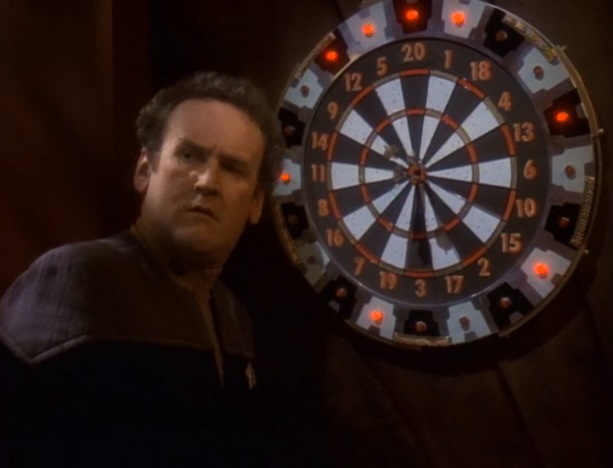 Story B: The courtship of Leeta

Rom finds himself sitting in Quarks bar nervous at the fact that he is going to ask Leeta out on a date.  Quark doesn’t believe that his brother will actually go through with it and is proven right when Rom runs away at his first chance.  Leeta worries that there is something wrong with her.

Soon Rom sees Leeta and another man (Zimmerman) out for dinner and tries to muster the courage to tell her he likes her but fails miserably.  Soon Leeta is offered a job off the station and asks Rom his thoughts on the matter.  Rom is unable to put his words together causing Leeta to believe that he is not interested in her.

Depressed, Rom is reminded about his deal with his last wife, Primadora, and how he and Nog were left all alone.  Quark offers his brother a holosuite program to help him get over his slump but Rom has other ideas.

Just as Leeta is leaving with Zimmerman, Rom rushes after her and begs her not to go.  He confesses his love for her and she graciously agrees to remain behind with him leaving Zimmerman to head off on his own, in pursuit of another woman.

We haven’t had a good Bashir-centric episode in a while and boy does this one deliver.

First off, Alexander Siddig is amazing in every way. We really don’t get as much of his character as we would like in this series but when he get’s his chance, this actor always shines.  Much like ‘The Quickening’ Siddig carries the majority of this episode on his own and manages to make it one of his best.

Genetic Engineering has been a reoccuring topic in Star Trek and, rightfully so.  Some 400 years prior to DS9 ( or 200 according to the misinformed Admiral) Genetic engineering gave rise to the ultimate in adversaries, Khan Noonian Singh.  Khan, if you were not aware of him, was the ultimate bad guy who managed to claim a quarter of the Earth as his own and was only stopped when he and his followers were sent out on a sleeper ship int space. (Why they were simply not just executed never made sense to me but sure, okay)  To prevent such an event from occurring again, humanity banned Genetic Engineering from use and that edict has been (mostly) held up for some time.  Enter Richard and Amsha Bashir.   Seeing that their child was having learning difficulties that would prevent him from having a ‘good life’, the Bashirs took Jules to a hospital on Adigeon Prime to undergo gene re-sequencing that increased his cognitive functions as well ash his hand eye coordination. This would eventually lead him to become a doctor and join Star Fleet but this secret would also be one that drove his family apart.

With this new back history, we get a much better understanding of who Julian Bashir is and why he is the way he is.  At first you get the sense that he is an egotistical doctor who just wants to practice medicine on the frontier.  While it is clear that he is smart, he has developed a personality trait that makes his intelligence come off more as smugness than anything else.  Plus, he deliberately fails at things, mistaking a preganglionic fiber for a postganglionic nerve, in order to hide his true abilities.  It is with this knowledge of who and what Julian is that we can now look at past episodes and see where this drive came from while explaining many of his interesting ticks and quirks.

On another note, I do find it interesting that Star Fleet was so willing to let Julian keep his commission and practice.  I have a feeling that Sisko has deeper connections than anyone knows… 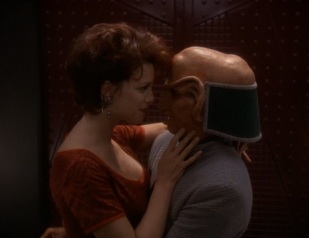 Story B manages to bring together two of the series best side characters, Leeta and Rom.  For too long these two have flirted past one another and frankly, they both deserve some happiness, especially Rom.  That guy has been through a lot and but did he fall upwards in this new relationship!

All in all, this was a wonderful episode that really explores Julian’s past, giving him much more depth than ever before while exploring the meaning of acceptance in the world at large.  Plus we got what was effectively a crossover with Voyager in the form of Dr Lewis Zimmerman, played by the great Robert Picardo.  I mean, how can you beat that?! 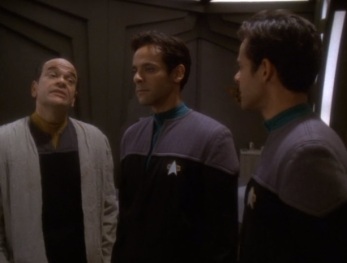 Thanks for reading the Retro TV Review,  I look forward to discussing the rest of the series with you, one episode at a time every Monday, Wednesday and Friday!  Next Review: A Simple Investigation