To seek out new life.  It is in the starfleet charter and that is just what Data does in this episode.  He discovers new life but not entirely in the way you would expect.  Originally airing on March 12,1990  This is The Offspring.

Commander Data creates a Soong type Android of his own, but, when Starfleet gets word of his achievement, they want to take her away to study this new achievment. 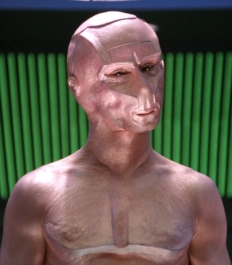 Data reveals to the senior staff that he has created a new android.  Picard immediately comments that he would have liked to have been consulted but Data counters with no one consults with the Captain when they want to have children.  Picard is upset and discusses the situation with Data, citing his concerns about how Starfeet will react to the project.

After allowing Lal to choose a sex and appearance of her own, Data begins teaching the basics to Lal, allowing her to experience everything she can.  Wesley suggests that Lal attend school on board and Data agrees after realizing that he can not teach her everything she needs to know.

Data soon asks Doctor Crusher for advice after Lal’s school experience isn’t what he had hopped, as Beverly is the only ‘successful parent’ he knows.  She suggests that Dara tell her about his experiences in becoming sentient and use his personal journey as a guide for his child.

Admiral Haftel contacts Picard and informs Picard that he will be coming aboard to assess the new Android and may take her with him no matter the protest. Picard contacts Data to explain the situation at hand. Picard tells Data that Admiral Haftel intends to take Lal from Data to the Daystrom Annex but the Admiral has no intention to bring Data along with them.  Data protests, saying that the Admiral has no right to remove his child from the ship.

The Admiral arrives and, after grilling Data, he is upset to discover that Lal is working in Ten-Forward under the tutelage of Guinan.  He insists on an interview and this is where things get bleak.  Lal agrees to leave with the Admiral when she learns all she can on the Enterprise and the Admiral counters.  He is determined to take her, no matter what and after the discussion she goes to speak to Counselor Troi. Somehow Lal is experiencing fear and doesn’t know how to cope.  She can feel and this isn’t something that she was programed for.  The more afraid she gets, the more her program begins to malfunction.

Admiral Haftel informs Data that he will be taking Lal off of the ship and he will not allow Data to stand in their way.  As they talk, Troi contacts them informing Data of the situation.  Her fear of being taken away has caused a cascade failure and Lal’s very being is at risk.  Admiral Haftel volunteers to assist but the damage is too great.  Lal, will end up dying.

In the last moments, Data transfers Lal’s memories into himself so that she will never, truly, be dead.

This is one of those rare episodes that addresses Life and the meaning of what it means to be Alive. Seeing Data create a life in his own image, not only establishes his character as being more human but it also shows that he is evolving as a person. He not only makes an offspring, he genuinely cares for Lal and wants only the best for his child.

There is a moment in the show that Admiral Haftel realizes, albeit too late, how real Lal is and how genuine Datas feelings are for her.  As he describes Data’s efforts to save Lal, His emotional response is one of the most impactful moments in the show.  It is quickly followed by a tear jerking scene where Lal dies after thanking Data for her life.  She tells him that she loves him and passes on.

The actress who plays Lal (Hallie Todd) does such a remarkable job in her role as well.   She is able to portray so many emotions even when remaining as an android.  I really wished that we had had more time with Data and Lal on the show but then again, this single moment in time was probably more impactful than any long story arc it could have had.

I would be hard pressed to find another episode that is as emotionally impacting as this one.  There is no grand action scene, no life threatening virus, no alien invasion, not even a B story to fill in the in between.  There is just Data and his fight to teach and keep his daughter.  This is Star Trek storytelling at it’s finest. There are many more impactful episodes, but this one really hits you hard. It is indeed one of the finest episodes in the series.

I vividly remember the first time I saw this episode and the emotional rollercoaster that this episode was for me.  I was along for the ride, cheering at Lal’s successes and lamenting her setbacks. Her ability to use contractions, her feeling emotions, everything was such an incredible ride, surely this would end on an amazing high note!  When the show reached its conclusion I was devastated that Lal passed away.   Data had finally found a way to be more human only to have one of his greatest achievements, a child of his own, taken away through death.

To this day, I can’t get through the episode without tearing up.

Data mentions that he is ‘the last of his kind’, implying that he believes Lore is dead.

The name Lal is Hindi for Beloved.

Starfleet is shown to be not as open to new lifeforms as it claims to be and really seems to have a bit of a problem with artificial life. This seems to be a reoccuring theme with them.

Initially Data made Lal (his child) with no species or sexual identity, effectively neuter.  He and Troi takes Lal to the holodeck to allow for his offspring to choose it’s appearance.  Lal chooses to appear as a Human Female and Data has made her to appear more human than he does.  There is a really cool scene that shows her final options out of the multiple thousands available.

Riker has a brief but memorable scene with Lal in Ten-Forward.  After watching a couple kiss she decides to try it herself.  Riker flirts a bit and is soon attacked by Data’s daughter.

Picard is willing to sacrifice his command and career to protect Lal from being taken from Data.  This really speaks to the character and makes

At one point Data turns Lal off at the same spot he can be turned off.  Apparently he wanted to be able to shut her up when needed, every parents dream I am sure.

We don’t see much of Riker in this episode and that is for good reason,  actor Jonathan Frakes was behind the camera for this one making it his Star Trek directorial debut.  I think he did a marvelous job.

This episode really reminds me of another Android that was in a terrific series of live action Disney films called ‘Not Quite Human‘.   The movies starred Jay Underwood and Alan Thicke.  They were some of my favorites for sure but sadly have never made it to DVD or digital formats.

Thanks for reading the Retro TV Review,  I look forward to discussing the rest of the series with you, one episode at a time every Monday, Wednesday and Friday!  Next Review: Sins of the Father