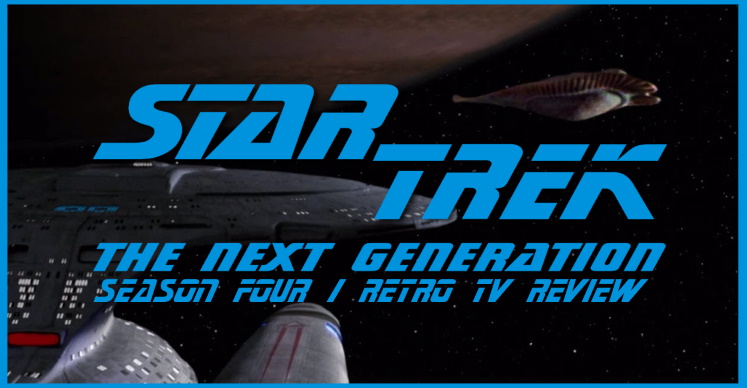 After three months of waiting, Season Four of Star Trek the Next Generation was back. Not only did we have to wait the entire summer but what a wait it was. The only news and teasers we would get were from the Official Magazine and the occasional snippet on television. Keep in mind, the Internet was still in its infancy so getting unauthorized ‘on set’ sneak peaks were a thing of the future still. So finally, on September 24, 1990 we got to find out what happened to Picard and the crew of the Enterprise in the Season Premiere: The Best of Both Worlds Part II.

Picard is captured by the Borg and The Enterprise, Captained By William Riker, must find a way to defeat the man who knows them better than they know themselves. This is the season premiere of Star Trek Season Four.

and now the conclusion….

With that, Riker fires the deflector array in an attempt to destroy the Borg Cube with Picard on board. Unfortunately, it is ineffective to the cube and Riker must cut off his attack before burning out the ships engines. Locutus informs Riker that all of Picard’s memories and tactics are now part of the collective and any attempt to fight is hopeless. The cube continuous on its way to Earth.

Riker informs Starfleet of the situation and Admiral Hanson informs them that, once the Enterprise is repaired, they will meet them at Wolf-359 with the rest of the fleet they have amassed. As far as Starfleet is concerned, Picard is a casualty of war and now Riker is in command of the Enterprise.

As the Enterprise conducts repairs, Riker promotes Shelby to his First Officer despite their strained relationship. He sees her as an asset and that she is much like he was when he first took the position on the Enterprise. They are soon contacted by Starfleet as the attack commences. Within moments, they lose contact with the fleet. 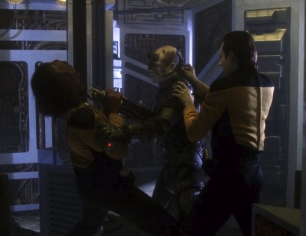 The Enterprise arrives at the Wolf system and discover that the Battle at Wolf-359 did not fair well and decimated the majority of the fleet Starfleet has been destroyed. The Enterprise begins its pursuit of the Borg and Riker assigns a special mission to Worf and Data. Riker contacts Picard and offers a chance to discuss terms. He knows that Locutus has all of Picard’s memories and that the only way to beat him is to do what is least expected. Changing up the original plan, he separates the saucer and sends Worf and Data to take a shuttle craft close enough to the Borg ship to beam aboard and recapture Picard. They succeed in capturing Locutus, causing the Borg Cube to flee the battle resuming its course back to Earth to assimilate the planet. 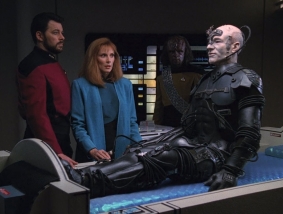 In sickbay, Doctor Crusher revives Locutus as Riker wants to find a way to get information from him to defeat the Borg. They discover that there is connection still between the Borg ship and Picard. If they disconnect Locutus from the collective, the risk killing Picard, but Data has an idea. He may be able to link directly with the machine part of Locutus. He begins the project with the help of Troi, O’Brien and Dr. Crusher. Meanwhile, the Borg have breached the Mars defence perimeter. Time is running out. 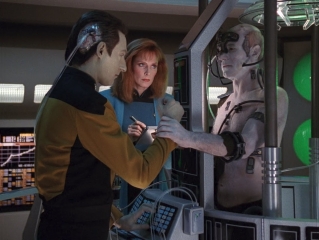 Data connects to the Borg and, in turn, with Picard. Troi can sense that Picard is present but can not directly communicate. This disruption causes the Borg Cube to stop and this buys them time. Picard is part of the collective and the Borg can not determine what to do given the situation. The Cube attacks and, as things look bleak, Picard breaks through and suggests they make the Borg ‘sleep’ using the connection between them and Picard. It is successful and, once they confirm that the Borg are indeed asleep. After determining that they are asleep, the Enterprise departs and the Borg Cube self destructs.

Picard is revived and he indicates that he remembers everything. Riker relinquishes command to Picard and Commander Shelby is assigned to Starfleet Command as head of Tactical.

Do I even need to answer that? Yes, it is a perfect end to the season three cliffhanger. Not only do we get a solid resolution for the Borg threat (for now), we also get some serious character building for Riker and Picard. 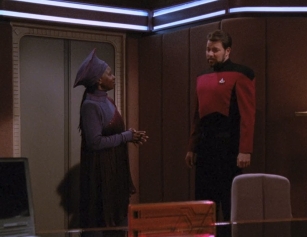 This is mostly Riker’s Episode as he is dealing with the burden of command and the possible death of his mentor. We really get a chance to see just how much Picard means to Riker and the crew as a whole. At one point, Guinan takes a moment to talk with Riker as her deals with the loss of Picard . Informing him that, while they trust him, the crew is scared and convinced they will be dead soon. She tells him that Picard is gone and Riker must accept that despite all that has transpired. Being one of Picards oldest and dearest friend, she is willing to do it and, in turn, he should be able to as well. It is time to let the Captain die as that is the only way to defeat him in this battle.

This talk really shakes Riker up and makes him realize for the first time that HE is in command now, that no matter what happens, it is his responsibility to defend the ship, even from the man who once was it’s leader. This give Riker some serious character growth, setting him up to be a stronger leader and ultimately a Captain himself in the future.

For Picard, the character growth doesn’t start until the very end. After becoming human again, he states that he remembers everything. This implies that he is aware and feels responsible for every death that occurred as Locutus. This will be further explored in future episodes, a movie and even becomes the origin to a certain Commander Sisko of Deep Space Nine.

This was easily one of the most anticipated season premieres of my childhood. Yes, there were other amazing cliffhanger episodes to come but this was the first and boy were we excited. Locutus would later become one of my favorite characters and was one of my favorite action figures when Playmates released it. This is one figure that I would absolutely buy again if someone were to make it. Maybe in one-sixth scale this time?

We get a hint of Guinan and Picards past when she talks with Riker. She asks if Picard ever told him of their friendship and indicates that it is greater than Family and Friendship. What this means exactly has yet to be determined, but I have my guesses.

This is the first real Captaincy for Riker and he actually gets a chance to wear the rank.

We never really see or hear from Commander Shelby again, despite the Federation engaging the Borg again in the future. I, for one, would have loved for her to have had her show up again and maybe feature her in her own series….it’s not to late CBS!

We get to see Data’s lab again. It looks to be the same place he built Lal in The Offspring.

This episode marks the first use of the Deflector Disc as a weapon. We will see that again… just wait.

For those in the Know, Picard isn’t done with the Borg, in fact, someone special is waiting for him and she’ll be around to visit in a few years.

Oh and unlike the previous seasons, no big changes this time around. We finally get a season that can just do some exploring…and explore they do!

Thanks for reading the Retro TV Review, I look forward to discussing the rest of the series with you, one episode at a time every Monday, Wednesday and Friday! Next Review: Family

One thought on “Retro TV Review: Star Trek TNG SSN 4 Premiere! Episode One: The Best of Both Worlds (part two)”