How will you be remembered? What will you leave behind to tell the future about your existence?  This is something that many struggle with every day.  The thought that your entire existence, everything you learned, everything you feared, everything you loved, will vanish with you when you pass away is a hard thing to accept. But what if you could preserve your entire life for someone else to experience? In the episode that originally aired on June 1, 1992, Picard experiences the history of a people in one of the most thought provoking ways possible,  through living it.  This is The Inner Light.

The Enterprise encounters a mysterious probe which causes Captain Picard to be transported into the body of another man where he lives out a full life in a matter of minutes.

While exploring a sector of space the Enterprise encounters a strange probe.  Just as it gets in range it sends out a signal that knocks Picard unconscious.  He awakes to a woman calling him Kamin and is clearly no longer on the Enterprise.

Thinking he has been captured, Picard begins to explore the village he has woken up in.  As he explores, he is greeted by others who refer to him as Kamin. He soon meets Batai, the council leader and, after being told that he had been ill, Picard plays along to get information.  He continues his exploration and finally returns home to his wife Eline.  Although Eline attempts to help, Picard insists that he is not this Kamin she thinks he is.  They begin to discuss their lives together. He soon learns that he has been married and is the best ‘iron weaver’ in the village.

Meanwhile, back on the Enterprise, Riker assumes command and asks Doctor Crusher to assist.

We jump ahead five years and, while Picard/Kamin is still learning to accept life in the village, he is starting to see his past as Captain Picard a vivid dream. As he holds on to the last of his past on the Enterprise, Eline begs him to finally give up his stories about his Star Ship and accept life with her.  Picard/Kamin joins Batai in discussing the drought with the local administrator.  Kamin suggests using atmospheric condensers and, while the administrator humors him, it doesn’t look like they are getting help with the drought.

After realizing that he has not been a good husband and partner for the past five years, Kamin finally accepts his place in the community and starts a family with his wife Eline.

Riker and the crew continue to try to assist Picard and decide it is time to cut the ties between Picard and the Probe.

We jump ahead again to find Kamin and Eline are celebrating the naming of their second child with Kamin playing the flute.  Suddenly Kamin falls to the ground as if struck, frightening his wife Eline.

The Enterprise continues to try to help Picard and discover that they can not separate him from the beam without harming him.  They reinstate it and begin to follow the trail of the probe back to its home planet. 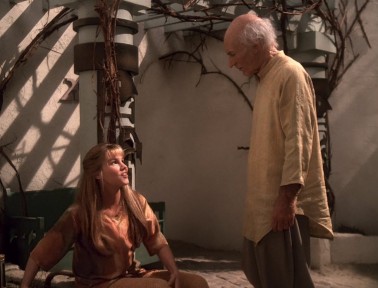 We leap ahead again to find Kamin’s daughter has grown up.  They discuss the drought and see that the past 15 years have proven that the drought is not getting better but Kamin encourages his daughter to live her life to the fullest no matter what.

The Enterprise find the planet the probe has come from but it is a dead planet whose sun has gone nova some time ago. 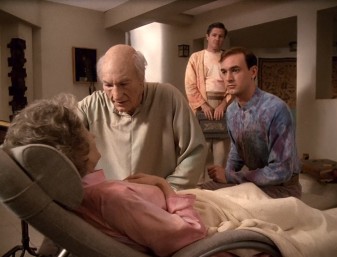 We jump ahead again and find Kamin and Eline have grown old. Their son Batai (named after their old friend), has decided to concentrate on his flute music instead of school, much to Kamin’s dismay. Kamin is worried that they are facing a bleak future and plans to present his finding to the Administrator.  The Administrator dismisses Kamin and explains that there is nothing they can do.  The government knows of the danger to the world and they do not have the means to save anyone.  The Administrator informs Kamin that there is a plan to keep the memory of their civilization.  Soon Eline becomes ill and, much to Kamin’s dismay, she soon passes on.  Kamin grieves the loss of his wife of so many years. 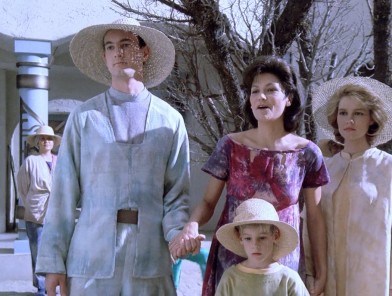 Next we find an elderly Kamin playing with his grandchild.  While he is happy to play with his child, he is saddened to know that his grandchild isn’t going to have a chance to live a full life.  They ask him to come out to see the launch of a missile and as he comes out to see it, he finds out that he has already seen what they are launching.   The probe that he encountered on the Enterprise is what they are launching and they sent it to find someone to tell their story.  Their memories live in Picard and their story is no longer lost.

Picard awakes on the bridge, lost and confused.  He realizes who he is but still has the memories of an entire lifetime in his head.  All of his experiences with his family as Kamin have only occurred in the past 25 minutes.

Riker later visits him with a flute that was found inside the probe.  The same flute that Kamin and his son Batai had played.

This is by far one of the most powerful episodes of the series, considered by most to be one of, if not the best overall.  I have to agree. Sometimes science fiction relies heavily on the science part to tell stories.  Those stories are usually of strange new worlds and technologies beyond explanations.  However, what makes science fiction good is when it focuses on the human side of the equation.  This episode is one of the latter, one that shows us how poignant science fiction can really be.

Imagine experiencing an entire life, from marriage to grandchildren, to death only to discover that all of the people you loved and lived among have been dead for over a thousand years.  That your entire experience has only taken place in a manner of minutes.  Picard goes through this and is irrevocably changed from the experience.  He has had an opportunity to live the life he never had, to be a husband, a father, a grandfather, a community leader and more but in reality none of it ever really occurred.  So that begs the question, what is Real?

If we are indeed the sum of our memories, would Picard’s life as Kamin be any less real than his life as Picard?  One could surmise that he was in fact Kamin for that short time and his experiences were as real as any.  The purpose of the probe was to transfer the history of these people to someone so that their memories would last forever, what a better way than for to allow someone to live for a time in their very shoes.

I will admit, even 26 years later, this episode still brings all the feels.  There are genuine moments of joy and sorrow throughout and it is such a wondrous journey. If you watch any episode of Star Trek The Next Generation, let it be this one.

For your enjoyment here is the iconic flute song Kamin plays, it is pretty amazing.

The Ressikan flute Picard gets from the probe and that he played as Kamin, will be seen again in the series as part of the set.

We don’t see Counselor Troi in this one, which is odd as you would think she would have been involved in figuring out why Picard is not responding.  You know, with her mental powers and all.

Thanks for reading the Retro TV Review,  I look forward to discussing the rest of the series with you, one episode at a time every Monday, Wednesday and Friday!  Next Review: STNG Season Finale: Time’s Arrow