Superhero Movies are not the new thing everyone tends to think they are. Since the 1920’s with the advent of The Mark of Zorro, the genre has been a regular staple for American cinema. This trend blossomed in the late 70’s with the return of Superman to the big screen and for the next ten years and, although softening a bit in the 90’s we have seen more comic book adaptations in the last 20 years than ever before. 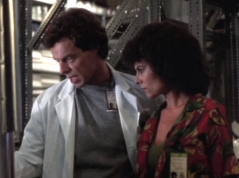 Based on the character created by Len Wein and Bernie Wrightson, Swamp Thing follows the tragic tale of Alec Holland (Ray Wise), a scientist who is trying to discover new wonders in the Louisiana Swamplands. Working with his sister on a top-secret bio-engineering project, they discover a unique formula that can revive dead tissue. Soon after Government Agent Alice Cable (Adrienne Barbeau) arrives the project is attacked by the evil Dr. Anton Arcane (played by Louis Jordan) and Alec Holland becomes The Swamp Thing in the freak accident that follows. Now Swamp Thing and Alice Cable must stop Dr. Arcane from using this new formula to obtain immortality!

As a kid I was obsessed with Superhero films and television series. So, when a Swamp Thing movie came out, we of course rented it on VHS. I have vivid memories of watching this film over and over again as a kid, marveling at the various transformations in the film and loving every second of it. At that age, I didn’t realize that Wes Craven, who would later make another of my favorite films, wrote and directed Swamp Thing but it really didn’t matter at the time. This was a fun film for me and I was excited for the inevitable sequel…which was just okay… There was even a 90’s tv series on USA and that one was surprisingly good..ish.

It’s not bad. It is very much the B-movie that Wes Craven was known for prior to his hit with A Nightmare on Elmstreet. Decent acting, fun special effects and pretty good story, it is a fun movie that doesn’t try to take itself too seriously, it just tells it’s story and leaves it at that. Is it the best Superhero film around? No, not even close. But is it worth watching? I think so, yes.

I did find it funny while watching this film again, I noticed that the Swamp Thing creature (played by Dick Durock) wore a rubber mask that was obviously cast from Ray Wise’s face. It doesn’t look too bad either, I just found it funny.

At this time it looks like you can only get it digitally as a rental, so if you only want to watch it and not own in, that is the best way to see the film. You can pick it up on Blu-Ray from Best Buy for around $15. It’s a 2 disc set with a DVD as well so you have options. If you like B movies and fun comic book cinema, then this is well worth the spend.