Hard decisions and a road to profit are explored in the episode that originally aired on May 9,1993.  This is Progress.

Kira must lead an evacuation of a moon in order to tap into the moon’s core but faces resistance by the local inhabitants.   Meanwhile Jake and Nog find opportunity in Yamok Sauce.

Story A: The hard truth

Kira begins working with the Bajoran government to begin tapping into the core of Bajor’s fifth moon, Jaraddo.  This experiment will provide heat and energy to much of Bajor but as she and Dax do their final pass to ensure the moon is safe to begin the process, she finds one last holdout who refuses to leave his home.

Kira is greeted by Mulibok who seems that he has no intention of leaving his farm and invites Kira into his home. Kira contacts Dax and informs her that this evacuation will take longer than expected due to the local farmer who has no intention to leave.   Mulibok indicates that dinner will take around three hours to prepare dinner, stalling the tapping of the moon’s core.   Mulibok indicates that he settled on this moon after escaping the Cardassians on Bajor and would rather die on his property than go back to Bajor for any reason.  It seems that Kira has her work cut out for her.

Before long she realizes that Mulibok’s insistence to remain in his home is not unlike her fight to keep Bajor from the Cardassians.  Mulibok invites her to start mining the moon at any time as he will remain right where he is no matter the threat.

Kira reports the issue to Sisko and the provisional government only to be instructed to remove Mulibok and his friends by any means necessary.  Kira returns to the farm with Bajoran soldiers in tow only to be confronted by Mulibok.  Even with the threat of violence, Mulibok refuses to cooperate.  It is when Mulibok tries to defend his friends by attacking the guards that things get serious.  Mulibok is shot and Kira calls Bashir for help.

Mulibok comes to and tell Kira that this proves that she doesn’t want to remove his forcibly.   Realizing he is right, Kira volunteers to remain behind to nurse the old man back to health.  Bashir reports the situation and, in order to keep Kira from losing her commission, Sisko accepts that Bashir ‘requested’ Kira remain behind.

Sisko visits her at the site and tells her that she needs to make a choice.  She is on ‘the other side’ of the table now and her duty supersedes the desires of a single person on a small moon. He tells her that this is not her fight and that Mulibok’s fate is already decided while she still has a choice in her future.

Once Mulibok is well enough, Kira realizes what must be done.  Donning her uniform she informs the old farmer that he is leaving and has no choice in the matter.  In order to convince him she gathers his personal effects,  sets fire to his home and destroys the kiln he has been working on, knowing that there is no other way he would leave.  In the end he asks her to kill him as he believes that if he leaves his home, he will die.  She refuses and  beams him off of the planet.

Quark is upset at one of his employees who ordered 5000 wrappages of Yamok Sauce, a Cardassian condiment he has no way to move. Soon Nog strikes up a deal with a Lissepian Freighter Captain who agrees to exchange the Yamok Sauce for 100 gross of Self Sealing Stembolts.   They strike up a deal only to realize that they need to convince his uncle to part with his Yamok sauce.

Determined to convince his uncle to take the Yamok sauce, he gets Quark to tell him to get rid of the sauce by any means necessary, effectively giving the sauce to Nog and Jake.  Upon taking the stembolts, they soon realize that they don’t even know what they are for.  Soon they realize that they have a buyer on Bajor who may still be interested in the cargo. 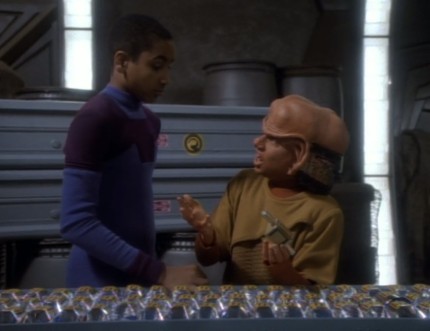 Jake and Nog contact the Bajoran who needed the stembolts only to end up with 7 tessipates of land on Bajor.  Nog is not happy with buying dirt but Jake is excited that they now have some land.

They soon overhear a conversation between Quark and Odo where they hear about the government that wants to build on the very land they purchased.  Quark claims to have no idea who the NOJAY consortium is but promises to find out soon.  Just as he is researching the situation, Nog fills him in a sells the land to him for 5 bars of gold pressed latinum.

This is one that has two very solid and very different stories, but makes for a terrific entry into Star Trek lore.

Much of the stories in the Star Trek franchise are presented as sociopolitical statements confronting a specific event or concern in the time of which the episode was written or was aired.     While there is no specific event this episode is referencing, it does discuss the merits of forced relocation of a people for the benefit of the greater whole.  Is such a thing right and should it be done?  That is not what is at stake here, the real story is seeing both sides of the coin in a specific instance.

For Kira, she has been fighting for decades against the very thing she is being asked to do by the new Bajoran Government.  Here are a group of people who are being forced to leave their homes so that a larger populous may have the benifits of the resulting energy that will be available.   Kira has been sent to finish the evacuation but soon discovers that, while the fates of the people on the moon are already locked in, she must make a decision whether to follow orders or strike back against the very government she helped to install.

There is an old saying in management, ‘It’s lonely at the top’. What this means is that the higher echelons of a structure can not find solace in those below as that would undermine their authority to do what is necessary.  Kira, for the longest time fought alongside people like Mulibok to ensure them a peaceful life once the Cardassians were driven out.  Now she finds herself in a situation where she must be the ‘bad guy’ and it is not easy for our former freedom fighter.   As she tangles with this choice of whether to stand with this single individual or follow the orders given her, there is another saying that comes to mind. “The needs of the many, outweigh the needs of the few, or the one”.  While this is a difficult edict to follow at times, to deny an entire people something that will benefit them all due to a single stubborn person is no way to ensure the survival of the group.

In this case, Mulibok would have been killed should he and his friends had stayed and, by relocating him to Bajor, they are giving him a chance to thrive.  While he doesn’t want to leave, he is doing this out of selfishness and stubbornness while not thinking of the greater good.  One could also argue that it is important to recognize the needs of the one or the few in every situation and they would not be wrong.  However, in Kira’s situation, the decision had already been made and it was up to her to determine the best course of action to carry out that choice.   Yes, she could have just allowed the guards to take him by force but that would have likely resulted in much more harm than good.

This is a major growth moment for Kira as she also gets a chance to see just how much faith Commander Sisko has in his second-in-command.  This is a moment that really begins to define a trust and bond between the two that grows over the next seven years.  Was her actions just and right?  well that is not for this reviewer to say, but a choice was made and she chose something. 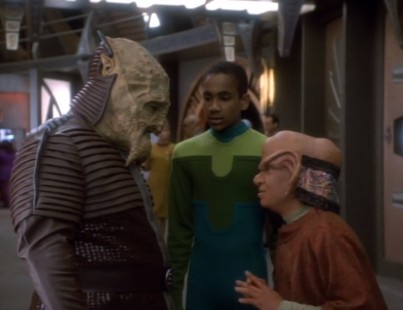 I love the secondary story of Jake and Nog’s first business venture together.  It really gives us a chance to see just how clever Nog is and how much they are learning from one another.  These two have a really fulfilling journey ahead of them and this is just one of the stops along the way.

We never see nor hear from Mulibok again but that is of no surprise.

This is the first and final appearance of the NOJAY Consortium.  I’m sure Quark had it declared illegal under Ferengi law or some nonsense.

Thanks for reading the Retro TV Review,  I look forward to discussing the rest of the series with you, one episode at a time every Monday, Wednesday and Friday!  Next Review: If Wishes Were Horses