This is it, the final episode of season four and it ends with a bang.  Originally airing on June 17, 1996.  This is Broken Link.

War is on the horizon between the Klingons and the Federation while Odo finds himself stricken with an unknown disease that could end his life.

Odo arrives in Garak’s store at the invitation of the Cardassian shopkeeper where he is shocked to find that Garak is attempting to play matchmaker.  Odo is immediately uncomfortable with the situation and, when the Bajoran woman named Aroya, invites him to share a meal with her, he only stammers that ‘he doesn’t eat’.  Frustrated at Garak for setting him up,  Odo turns to leave the shop only to collapse on the floor after going through convulsions.

After being checked out by Bashir,  Odo learns that his mass and density is in a state of flux.  Odo is frustrated when he learns that he will not be allowed to leave the infirmary until the Doctor finds out why this is happening.

Soon, Sisko finds himself in a desperate situation when Gowron announces that the Klingon Empire has demanded border changes or prepare to face the consequences.  Sisko believes that Gowron is just rattling his saber but Dax indicates that she is hearing that the Klingons are amassing a fleet not far from the disputed borders. 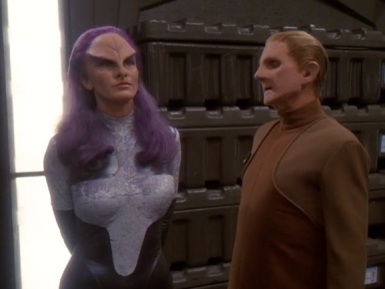 After the briefing, Kira, hoping to check in on her friend, brings Odo his security report where he finds something interesting.  In his weakened state, Odo goes to confront a Boslic Captain who is attempting to steal a valuable jewel.   Just when he is making the arrest, however, he is once again struck with his illness, reverting him into a liquid state in moments.

It soon becomes apparent that he can no longer shape-shift and he is having more and more issues maintaining human form.  Doctor Bashir indicates that Odo may have up to two weeks before the shapeshifter is unable to maintain a physical form ever again. Odo admits to the Doctor that he knows he must go back to his own people as this is the only way to save himself.

The crew soon board the Defiant to take their friend to find the Founders in the Gamma Quadrant.  Sisko is surprised to learn that Garak has asked permission to join the mission as well.  Sisko agrees to let the tailor join the mission but under one circumstance, Garak must keep Odo occupied during their travels. 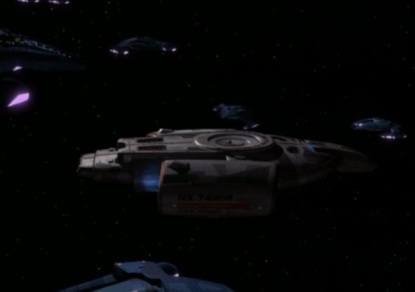 Heading into the Gamma Quadrant, it isn’t long before the Dominion take notice and send a fleet to rendezvous with the Defiant.  The Defiant is soon boarded by Jem’Hadar and the female Changeling.   She soon indicates that she wants to take Odo back to the Great Link in order to save him.  Although disappointed, she agrees to allow them to accompany Odo to their home world but only if they do so without tracking the location of the Founder’s homeworld.  Sisko reluctantly agrees and the female Changeling pays a visit to Odo. 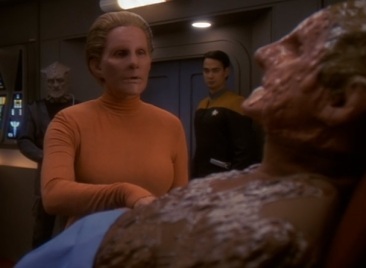 Linking with him, the female Changeling gives Odo a transfusion that allows him to retain his physical form again, even though it will only be for a short time.  After dismissing everyone else, the Changeling confirms that Odo’s affliction is due to his actions killing another changeling.  He has violated the most sacred law of his people and he is now forced to return to the Great Link to be judged.

Planning to join maintain a lock on Odo when he returns to the Link, Odo becomes adamant that he be allowed to face the judgement of his people.  Sisko and Bashir reluctantly agree and are allowed to join Odo on the surface while the constable faces judgement.  Pleased that his friends care about him, Odo walks into the Great Link merging with the others in a sea of changelings.

After learning that the Founders ensured that no Cardassians survived the attacks on the Cardassian ships.  Garak tries to override the controls to allow him to obliterate the Great Link in one fell swoop.  Stopping him, Worf takes down the Cardassian spy after a brief fight.

Back on the planet, Odo is deposited on the shore as a solid.  The Female Changeling indicates that he has been judged and has been made a solid, something that Odo had always wanted.  She informs Sisko that Odo is his and to take him and return to Deep Space Nine.

On the Defiant, Bashir is shocked to learn that Odo is indeed a human now with type O Negative blood.  Odo indicates that even though he is human now, they forced him to maintain his shape shifting face to never forget what he is and what he has lost. 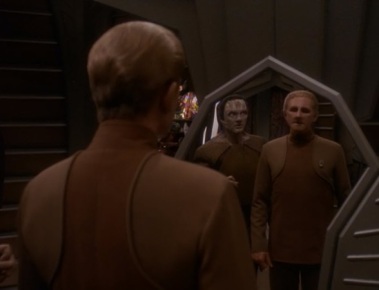 Back on the station, Odo finds himself uncomfortable as he is fitted with a uniform for the first time.  After the fitting, Odo begins to escort Garak to a holding cell for his action on the Defiant, Odo is stopped by Chalan Aroya who offers him some company whenever he wants.

Running into Sisko, Odo indicates that he is having flashes of memories that he can not explain.  Just as they begin discussing his new form as a solid, they are interrupted by an announcement from Gowron that the Klingons are planning an incursion into Federation Space.  It is then that Odo realizes that the other changelings were hiding things from him and that Gowron, the head of the Klingon Empire, is in fact a changeling.  A war between the Federation and the Klingon Empire is inevitable.

Wow, what a great semi-cliffhanger for the end of season four.  Not only do we have a major change to the status quo with Odo being a Solid, but the revelation that Gowron is in fact a Changeling is one of the biggest reveals in the series so far. 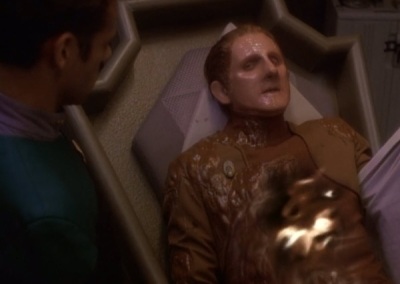 From having no knowledge of his origins, being accepted as the head of station security, discovering that his people are a race of shape-shifting subjugators, to being deemed an outcast of his own people, Odo has had quite the journey so far.  With this big change, Odo is faced with yet another leg of his journey, the adventure of being a solid, of essentially becoming human.

Interestingly enough, even though Odo loved being a shapeshifter, it has been clear that he also has seen his powers as a hindrance from joining the others. Secretly he has wished for a chance to be human and, like the Little Mermaid, he is given his wish but at what cost?  He has made it clear on many occasions that he doesn’t eat, doesn’t sleep, doesn’t drink, but now with this change, his entire life will need to adjust. The implications alone are enough to intrigue viewers as to what will become of the shape-shifting Constable in season five but, then the writers throw on the revelation about Gowron and things get seriously complicated.

The question now is, how do they confront a Klingon Empire secretly headed by a shapeshifter and, just when did he get replaced to begin with?  Was it as far back as his time on STNG or is has he even been replaced to begin with?  Could these memories be all part of a bigger plan by the founders now that Odo has chosen a life with the Solids?  These, of course, are some of the big questions going into season five and you will have to wait to find out, thankfully, it won’t be as long as we had to wait when they first aired.

All in all, great season finale with a lead in that sets up some serious events to come. With a tremendous job coming from actor Rene Auberjonois, this episode is one of the strongest finales this series has seen yet.

Thanks for reading the Retro TV Review,  I look forward to discussing the rest of the series with you, one episode at a time every Monday, Wednesday and Friday!  Next Review: Season 5 Premiere: Apocalypse Rising