Bashir encounters a woman with a unique ability while Quark fears for his future.  Originally airing on October 31,1993, this is Melora.

A new officer arrives who has unique physical needs due to being from a planet with low surface gravity.  Soon Bashir finds himself falling for the new officer.  As Bashir deals with his passion, Quark finds himself in trouble as one of his associates is determined to kill him.

Story A: The Gravity of the Situation

Ensign Melora Pazlar arrives on Deep Space Nine and immediately goes to work.  Determined not to be treated differently due to her physical limitations in a higher gravity situation, she immediately comes off as a bit brash and defensive to the officers who come to greet her, Jadzia Dax and Julian Bashir.

After reviewing the mission for the new Ensign, Sisko and his senior officers greet Ensign Melora to Operations. She wants to pilot a runabout to the Gamma Quadrant on her own and is disappointed to be told that she can not.  She believes that they are denying her the opportunity due to her disability but in reality it is simply a matter of protocol. Sisko makes his matter clear and informs Melora that Lt Dax will be accompanying Melora to the Gamma Quadrant at 0730 the next morning.

Later, Julian visits Melora in her quarters inquiring about the anti-gravity system that he set up for her in her personal space.  She immediately goes on the defensive upon seeing him trying to keep Bashir at bay.  Soon she finds he is not one to be dismissed and begins to open up to his offer of friendship when he offers to take her to dinner.

They go to the replimat where she impresses Julian by ordering their meal in Klingon, debating with the Klingon Chef about the quality of his half-dead racht.  Over dinner, Bashir begins to tell her about his past and how he became a Doctor.  Despite all of his attempts at romance and finding a connection with Melora, Bashir finds himself alone after dinner.

The next morning Dax finds Melora already at the docking bay on the ground with her body suit malfunctioning. Dax takes Melora to the infirmary where Bashir ensures she is well. He insures her that they have faith in her abilities but she needs to have faith in theirs.   That evening, Melora invites the young Doctor into her quarters to experience the low gravity in more ways than one…

On their mission to the Gamma Quadrant, Dax and Melora discuss the merits of her dating Julian while on DS9.  She is concerned that should she start a relationship, it will all end when she moves on to the next assignment.  Dax comforts her in the thought that Melora should consider the alternatives of avoiding a relationship.

Upon returning, Julian surprises Melora with a possible treatment to allow the Elaysian to be free of her chair and servo suit.  She is, of course, elated at the possibilities. They soon begin the process and it isn’t long before she begins to see the results of the treatments.  Even though it is a promising development, she is distraught when she learns there is a trade-off and she will never be able to be in a low gravity environment again.

Back in the Gamma Quadrant She confides in Dax that she is unsure about the treatments.  Upon returning to the station they run into Quark and his problems with Fallit Kot.  (continued below)

Story B: Quark Must Die 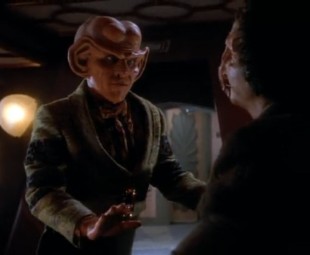 As Bashir and Dax deal with the new Ensign, Quark is wheeling and dealing with some valuable items.  Just as he is about to close a new deal he encounters a man he is clearly frightened of, one Fallit Kot. It seems that Fallit is there to kill Quark after spending 8 years in the custody of the Romulans.

Quark is beside himself and attempts to sway Fallit from his death threat. Soon he goes to Odo where the shapeshifter seems unconcerned with the death threat, but still agrees to do his job in preventing the violence to come.  Soon Odo confronts Fallit and informs him that he will not allow the man to kill Quark on his station.  It is clear that nothing will sway the man from his mission and Odo warns Quark to stay close and contact him at the first sign of trouble.

Quark arrives at his bar and finds the lights out.  Ambushed, he soon finds himself at the mercy of Fallit Kot.  The man is about to kill him when Quark promises 199 bars of gold-pressed latinum.  Quark meets with his buyer and Fallit betrays him, taking both the latinum and the items being sold.   On the run, Fallit forces Melora, Dax and Quark into the runabout and takes off.

Contacting Sisko, Fallit demands to be released of the tractor beam holding the runabout and shoots Melora to make his point.   Sisko releases them and Fallit takes the runabout with his hostages through the wormhole with Sisko on a second runabout close behind.   Just as Fallit is about to take the runabout to warp, Melora wakes and works her way to the gravity controls. As Dax detracts him, Melora deactivates the gravity and knocks Fallit out saving the crew.

Returning to the station, Bashir is sad to learn that Melora is not interested in continuing with the treatments he devised.  To give up who she is, is too much to ask.  She is not willing to give up her fins and become human.

This is a great episode that really, finally, gives Bashir the focus he needs to develop his character.  For too long Bashir has been little more than a somewhat creepy side character we finally get some insight into who he is.  Ultimately Bashir is a young Doctor who wears his heart on his sleeve.  He is brash and rather egotistical but beneath it all he really does want to help people and…to be liked. We learn later in the series more of why he is the way he is but lets not get ahead of ourselves.

On the story side, the episode is obviously about people with disabilities.  Due to being from a planet that has a lower gravitational pull that ours, Melora has difficulty moving around in our gravitational constant without the assistance of a servo suit or a wheel chair.  Due to this, she is constantly afraid of being treated differently and hyper aware of people who may or may not intend to make her feel this way.  Due to this, she has avoided relationships and constantly pushes her superiors from getting in her way.  She has come to use this disability as a strength but at the cost of social interaction.

It is when she meets Bashir that she begins to let her guard down.  Here is someone who genuinely wants to get to know her for who she is…okay mostly for that…and is also someone who offers her a chance to enter a world she has been denied her whole life. The interesting thing about Melora’s disability though is that it is not a real disability, it is something that she and her species live with on a everyday basis.  In fact, it is our own gravity which causes what everyone else perceives as a disability.  She is in fact, pushing herself to join people who are used to a higher gravitational constant, determined to not be held back by any physical limitation that are presented.

This is where we get to the ‘real world’.  It is well known that people with disabilities are treated differently even if it is not intended.  Yes, wheelchairs need ramps in order to get up areas that are not easily accessible but that is not what I am talking about. Humans without disabilities tend to pity or look upon those with them as they are inferior.  It is perceived that anyone who isn’t ‘normal’ is to be looked upon strangely even handled with kid gloves.   The irony is that most people with any sort of disability have no need or desire to be treated as such, they want to live their lives like anyone else, one day at a time. In reality, people should focus on the person themselves and not what that person may or may not be able to do.  In Melora’s case, she was the first Elaysian in Starfleet and was an accomplished cartographer who was well known in her field.   To give you a perspective, famous people like Andrea Boccelli, Michael J Fox, and Stephen Hawking all had disabilities and they are all very accomplished people who were able to overcome the stigma related to having a disability.

We meet the Klingon Chef at the replimat for the first time.  Though never officially given a name, he will be back again.

We never see nor hear from Melora again.  I guess that subspace relationship didn’t work out after-all.

If you are looking for more info about people with disabilities and education on how to conduct yourself around others, the National Disability Authority has a wonderful website that will do just that.  Just remember, the best rule of thumb…don’t be a dick.

Thanks for reading the Retro TV Review,  I look forward to discussing the rest of the series with you, one episode at a time every Monday, Wednesday and Friday!  Next Review: Rules of Acquisition