The story you are about to see is true, the names have been changed to protect the innocent.

This is The Station, Deep Space Nine. I work here, I’m the constable. It’s a dragnet on Deep Space Nine in the episode that originally aired on November 14,1993.  This is Necessary Evil,

After an attempt on Quarks life, Odo must reopen a five year old cold-case involving the murder of Bajoran shopkeeper. 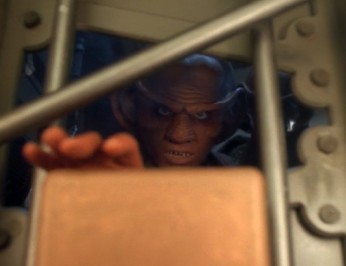 Quark visits Vaatrik Pallra, a Bajoran woman during a storm on Bajor, who is asking him to retrieve something from her former husbands old shop on the station, he isn’t aware that she is setting him up for something sinister.  Back on the station, Quark and Rom begin their clandestine operation when Rom reveals that he has a special device that allows him to get through locks.  After retrieving the goods, Quark and his brother return to he bar where they find a list of names locked away in the box they retrieved.  As Rom leaves to get an images to scan the names, a stranger arrives and forcefully takes the list from Quark.  Shooting Quark, the stranger flees, leaving the Ferengi Bartender on the floor of his bar, apparently dead.

Bashir rushes to the Bar to save the Ferengi’s life.  It is clear that there is a murderer on board the station and it is up to Odo to find out who it is.  Odo of course immediately suspects Rom for murder but is challenged when Sisko steps in playing good-cop.  Using the good cop/bad cop method they get Rom to reveal that they ‘found’ a list of names in a shop. When Rom mentions the Chemists shop, Odo realizes that this case is one from his past. 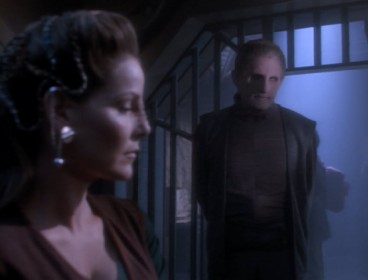 Odo enters the office and encounters Gul Dukat, prefect of Bajor and Station commander of Terok Nor.  Dukat asks Odo to begin an investigation of the murder of a shopkeeper on board the space station believing that Odo would be the best man for the job.  Initially refusing, Odo gives in to the job when Dukat informs the Shapeshifter that Dukat’s alternative is to take more life in exchange for the life already taken.  Being a neutral observer, Odo is the only person who can find the necessary information from all parties. He is soon introduced to the wife of the deceased, Vaatrik Pallra who informs him that her husband had been having an affair with a young Bajoran woman who recently arrived on the station. Pointing out the woman she believes killed her husband, she points out none other that Kira Nerys.

Odo realizes that he now has new evidence in a five-year-old murder case.  Odo questions Rom, trying to get the Ferengi to remember the names on the list that he and his brother discovered. Realizing that his attempts are futile, Odo releases the brother and runs into Kira in on the promenade. She indicates that she is thankful for him as she would have been executed for the murder had it not been for the constable.

Back on Terok Nor, Odo joins Kira at her table to question her concerning the murder. She indicates that she was not involved with the shop keeper in any way other than purchasing tea from him.  Something isn’t quite right with Vaatrik’s story but Kira’s isn’t lining up either.  In the end, she tells him that everyone much choose sides eventually, even if Odo doesn’t want to.

Odo visits Vaatrik on Bajor where he informs her that Quark is still alive despite the attempt on his life.  He notes that she may have come into some money recently that oddly coincides with the attempted murder of Quark.  It is clear that she is up to something but Odo can not pinpoint what. Returning to the station, Odo stops by the inferiority to check on Quark where he runs into Kira who informs him that their one leads Rom remembered is dead and Odo blames himself as he mentioned the name to Vaatrik. 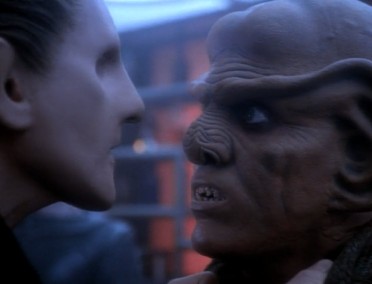 Odo enters Quarks Bar where he learns that Kira paid Quark for an alibi at his bar.  Dukat approaches indicating that he needs a name from the Shapeshifter so they can close the case.  It seems that Kira is looking more and more guilty by the minute.

Odo provides a list to Sisko and Dax of what he believes is the list that Quark and his brother found.  He pieced it together via deposits in Vaatrik’s account.  It appears the list is one indicating collaborators during the occupation, something that would be considered a war crime. 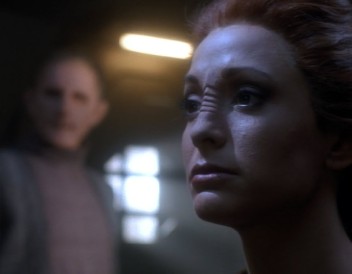 Odo questions Kira about her false alibi. She reveals that she could not kill him as she was in ore processing where she was attempting sabotage against the Cardassians on board the station.  She reveals herself to be a part of the Bajoran Underground and, if she is exposed, she will be killed. Odo lets her go just as Dukat arrives demanding to know if this Bajoran woman is the killer.

The Bajoran killer arrives in sickbay and makes an attempt on Quarks life only to be interrupted by Rom.  Just as he is about to make his escape, Odo stops him and manages to save Quark from death.  Vaatrik is brought to the station where she is placed in holding.  She still claims that she didn’t kill her husband and Odo agrees.  Odo has figured it out and realizes that he has known the killer this whole time.  Putting it all together, he informs Kira of his finding where she admits that she was there on Terok Nor to find the list of collaborators. She inadvertently killed the shopkeeper when he walked in on her.

In the end, Odo realizes that in all the years he has gotten to know Kira, that this event taints what they had.  He knows that he cant trust her the same way he did.

Done in the style of a classic detective story (with even the ‘dark and stormy night’ opener, this is a great episode that really gives some needed character development to our shape-shifting constable.  Odo is one of the more mysterious characters on the series, nothing is known about his history and little is known about him personally.   All we know is that he has a very keen sense of justice, one that is not to be trifled with. So, when one of his few cold cases reemerges on the station, Odo rushes in to close the case only to find out something he probably wishes had remained a mystery.

It is great to see Odo on Terok Nor but not under the employ of the Cardassians in any way.  As he is now, he has always been more of a free agent and one to not judge others thanks in many ways to the way he was treated when he was found. This sense of fairness coupled with his sense of justice is what ultimately made him an ally to the Bajoran people and landed him his role on Deep Space Nine.

As the series progresses you tend to forget that Kira was part of the underground on Bajor.  No, I really don’t mean forget she was IN the underground, as she constantly reminds us, but I mean that you forget what kinds of things that meant she had to do.  She was a spy, a killer, a fighter and one that had to do things that would have otherwise been considered immoral or even illegal.  She had to do anything she could to survive and, in turn, allow her people to survive the occupation of Bajor. Even though Odo is disappointed in the fact that she never admitted to him that she did, indeed, kill the shopkeeper, deep down he understands why she did it and that is enough to keep him from ending the friendship.

We get the first mention of the Cardassian Neck Trick that Odo was famous for. Will WE ever see this famous trick?  Only time will tell.

We also get hints of the scientist who ‘cared’ for Odo when they found him.  Apparently Odo is not too fond of that man…

We get a glimpse of Rom’s intelligence in this episode indicating that the Ferengi may be just playing dumb to eventually get to his brothers bar.  That being said, Rom genuinely cares for his brother as he thinks of Quarks safety over Rom’s own profit, showing us that while he may actually be intelligent, he really has little business sense in the Ferengi fashion.

Thanks for reading the Retro TV Review,  I look forward to discussing the rest of the series with you, one episode at a time every Monday, Wednesday and Friday!  Next Review: Second Sight