Garak, more than a Tailor, his background is a mystery wrapped in an enigma.  However, when something from his past comes back to haunt him, we find out more about plain simple Garak.  Originally Airing on May 8, 1994, this is The Wire.

When Garak begins to demonstrate strange headaches, it is up to Julian Bashir to discover how to remove, or deactivate, an implant that resides in the Tailor’s Brain. 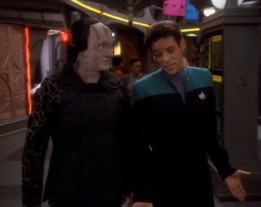 Visiting with his friend Garak on the Promenade, Julian Bashir enjoys a conversation about one of the finest Cardassian Novels ever written, The Never-ending Sacrifice.  Just as they are about to get dinner together, Garak begins to exhibit terrible headaches.  Refusing help from Julian, the Cardassian Tailor rushes to his shop clearly frustrated at the Doctor’s offer for assistance, leaving Bashir confused. 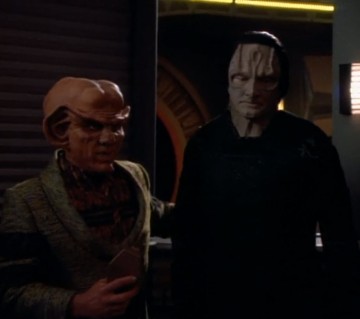 Julian visits Jadzia to help diagnose the illness of her favorite plant.  He tells her that it is simply, sick and soon discovers that she is using the wrong soil that is bereft of a beneficial fungus.  Julian soon tells Dax of his experience with Garak.  He is clearly upset at the situation and Dax points out that it seems to be bothering him.  Going to visit the Cardassian afterward, he is surprised to see Garak doing business with Quark.   It seems that the Tailor has ordered a new garment scanning device which peaks the Doctor’s interest as the conversation he had overheard did not seem to involve a scanning device.

The next day, Bashir is summoned to Quarks Bar where he finds Garak drunk on Kanar, of which Quark claims he was using to stave off a headache.   Garak invites Julian to his quarters but Julian switches it on him and tells the Cardassian that he needs to visit the infirmary.  Just as Garak begins to argue, he collapses on the ground in pain causing Julian to beam the both to the infirmary in order to save his life.

It seems that Garak has an implant in his head that is causing him great pain.  Asking Odo for assistance to determine what Quark knows about this device, Odo informs Bashir that he has a system that allows the shapeshifter to monitor Quarks outgoing calls and can find out what the bartender knows.

That evening Quark contacts the Cardassian Boheeka and asks for what he can find out about a specific device.  As soon as Quark gives him the code, the Cardassian freaks out claiming that the device has been classified by the Obsidian Order and just putting the number in will cost him his life.  Upon mentioning the Order, Quark ends the call.  Meanwhile, Odo mentions that the Obsidian Order is the equivalent to Big Brother in the novel 1984.  They watch and log every action of every Cardassian and are known to make people vanish.    Julian returns to sickbay only to find Garak has left the infirmary.

Rushing to the Cardassians quarters, he finds Garak injecting himself with pain killers that are far too strong for him.  Upon learning that Quark will not be able to acquire the device the Tailor was after, Garak indicates that he has no option than death, refusing to be allowed to be operated on.  As they talk, Garak finally confides in Julian about the device in his brain.  This implant was placed in his head by Enabran Tain in order to help the Tailor to avoid torture.  The purpose of the device is to activate the pleasure centers in his body when facing great pain.  After being outcast, Garak started using it on a regular basis causing his body to become dependent on the endorphins he has been living off of for the past 2 years.  Without the device he will die, however if the device is not removed, he will die as well. Garak tells the Doctor that he murdered Bajoran Civilians while he was a Gul and this was the cause of his exile.  While the story comes across as harsh, Julian refuses to allow the Cardassian to suffer and demands to be allowed to help remove the device. Garak reluctantly agrees and Julian begins his treatments. 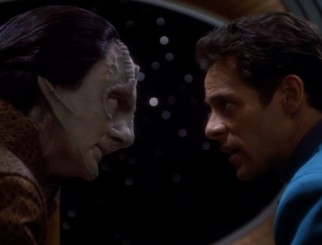 Odo soon arrives demanding to speak to Garak concerning murders by the Obsidian Order, Julian denies the shapeshifter entry and continues treating his Cardassian friend. Some time after deactivating the implant, Garak regains consciousness and the Doctor finds the Tailor upset and violent.  He tells Julian that he worked for the great Enabran Tain and his story about the Bajoran civilians was a lie and that he let them go, solidifying his disgrace.  All along he keeps mentioning his friend Elim and how they both were shocked at being asked to kill children.  He has come to find himself alone and miserable on DS9 being forced to be so much less than he once was.   At the peak of his anger, Garak begins to attack Julian only to drop into seizures.  Julian beams him to the infirmary where he discovers that turning off the implant might also cause his death. Garak awakes and explains that he and Elim were considered the Sons of Tain, feared even by the Gul’s themselves.  When things went south, Garak tried to betray his friend Elim only to discover that Elim had already done the same thing to Garak.  Garak was then exiled for his actions.  Garak asks for forgiveness and soon loses consciousness.  Julian leaves DS9 to find Enabran Tain himself and get to the bottom of the situation.

Beaming into Tain’s home, he is surprised to learn that Enabran Tain already knows Bashir and was expecting him, making it easy for the Doctor to arrive.  After discussing the matter with Tain, Julian receives the information he needs. Tain doesn’t do this as a favor to Garak, but as a punishment, Tain wants Garak to suffer for the rest of his life surrounded by people who hate him. Just before leaving, Julian learns that Elim is Garak’s first name and that the friend Garak spoke of does not exist.

Garak is well again and the two share a meal in the replomat.  Garak gives Julian a new book to read, thinking the Doctor might enjoy it more than The Never-ending Struggle.  In the end Julian asks Garak to clarify which stories he told were true.  Garak simply tells  him that they were all true, especially the lies. 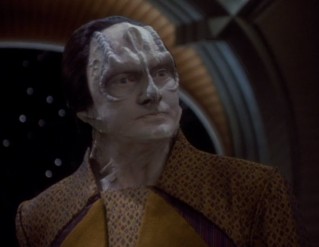 This one is a classic.  Focusing on Bashir and his friendship with one of the most fascinating side characters in any Star Trek series, Elim Garak.  For the past two seasons we have gotten to know little about plain simple Garak other than there is no way he is plain or simple.  This is one of the few remaining Cardassians on the station who, knowing he will be hated and shunned due to the occupation of Bajor, has chosen to remain on-board as a tailor.  Sisko sees him as a spy, Odo is continuously suspicious of him and Quark knows more than he lets on, and, when Garak attaches himself to the young Doctor, things get even more interesting.

In this episode we learn quite a bit about Garak and his past while also learning almost nothing.  We find that he was indeed a member of the Obsidian Order under the tutelage of Enabran Tain.  In that time he did something that caused his relationship with Tain to diminish to the point of banishment, making it so that our plain simple Garak could never return to Cardassia Prime much to his dismay.  What that act was is still a matter of speculation, did he save a bunch of Bajoran Orphans, was he a Gul, is he or is he not the Elim he spoke of, could that be a common name on Cardassia?  With every story he tells, more and more questions come up adding to the intricacy that is Elim Garak, Tinker, Tailor, Soldier, Spy.

Andrew Robinson does an amazing job as Elim Garak, cementing him as one of the best supporting characters in the series.  After this one, I found myself wanting to know more about this character and Robinson’s portrayal had everything to do with that.

All in all, this is a great one that sets up some very important things for the future of Deep Space Nine.

We also learn Bashir’s full name Julian Subatoi Bashir,  this is the first and last time his middle name is referenced.

We meet Enabran Tain for the first time and it will not be the last we see of this iconic Cardassian character.

Thanks for reading the Retro TV Review,  I look forward to discussing the rest of the series with you, one episode at a time every Monday, Wednesday and Friday!  Next Review: Crossover