The James Bond series was a monumental series for me growing up and, as I planned on featuring one of the 20+ films in the series as a Key Movie, I just couldn’t choose.  Since I can’t choose a single one, I am reviewing each and every Bond film wrapping with today’s entry, Spectre.

Welcome to the final entry of Key Movies Of My Life James Bond Edition.

After receiving a posthumous message from the previous M, Bond sets off on a mission to stop a terrorist attack.  Soon he becomes embroiled with a man known as  Franz Iverhauser, a man who may have connections with Le Chiffre, Dominic Greene and Raoul Silva.  Now Bond must find out how this man is connected to some of his worst foes and discover what he is planning before it is too late. This is SPECTRE.

As if it were not obvious by now, I am a fan of the Bond Series.  So, when the title of this film, SPECTRE, was announced I was elated. That name and that logo could only mean one thing, finally, after over 40 years, the original villainous organization from the classic films was back and it was way past time.

Every super hero organization needs a counter, the Justice League has the Legion of Doom, GI Joe has Cobra, The Autobots have the Decepticons. Although the organization had not been in the films for some time, SPECTRE and it’s enigmatic leader, Ernst Stavro Blofeld were, to me, as synonymous with James Bond as the Walther PPK and the Aston Martin.  SPECTRE is the antithesis of MI6, doing all they can to counter every aspect of the secret British organization but, no matter how many times Bond manages to kill the multi-tentacled beast, they always seem to find a way to return for more.

This is very much a by-the-numbers Bond film.  It seems that the loss of Dame Judi Dench in Skyfall shifted the series to more of the traditional Bond of old as opposed to the more realistic espionage we had just gotten comfortable with.  While that is not necessarily a bad thing, this one lacks much of the nuance and cleverness that Casino Royale and Skyfall played with, instead favoring the classic tropes like specialized henchmen, over-the-top action and of course a few classic gadgets.

The problem with returning to form is that the film telegraphs its every move providing no surprises and no shocking reveals in the course of the film.  While it is a fun action packed adventure, even a casual fan knows what to expect from the first thirty minutes.  One of the biggest issues is in the casting of a key role, the role of ‘C’ (Max Denbigh) as portrayed by Andrew Scott. 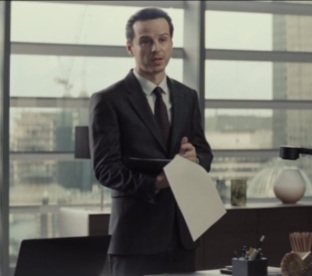 Now, Andrew Scott is a terrific actor and really came into the limelight during his time as Moriarty in the amazing BBC series Sherlock.  Due to his time on Sherlock, his face and mannerisms are easily associated with villains and viewers immediately recognize that he is not one to be trusted.  Much like casting Brad Dourif as the lead scientist in Alien Resurrection, you know exactly what to expect from this actor and, unfortunately, this film, like Resurrection, just isn’t capable of surprise as it plays directly into the type casting these actors have unfortunately been locked in.  He does a fine job in his role but unfortunately it was a rather obvious part. 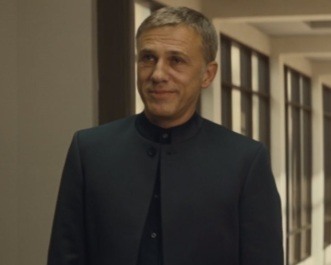 The real villain in this is none other than Blofeld himself played by Christoph Waltz.  Under the name of Franz Oberhauser, Waltz too has his role telegraphed to the audience but not because of type casting, but due to the fact that he is portrayed as the head of the criminal organization SPECTRE.   Everyone who is a fan of the series knows who Blofeld is and the film does not do itself justice by trying to conceal the fact that Waltz is in fact the man who would one day sit in a chair petting a white cat, giving out orders to destroy the world. Waltz, as usual, does a terrific job in his role, even adding some interesting connections to Bond himself, but it is unjustly under cut by this obvious misstep by the writers.

Ironically, it is not the lead villains who dominate the screen in their battle with Bond but the main henchman, Hinx, played by wrestler Dave Bautista.  It is not often that a wrestler proves them self to be a solid actor even though many of them try, but in the case of Bautista, acting is clearly a second skin.  This large ominous man has the keen ability to come across as not only intimidating in his many roles but soft and humorous as well.  This time, he pulls off the role of henchman with a perfection unlike we have ever encountered in a Bond film.  He is cunning, dark and proves a true challenge to Craig’s Bond.    Although his fate in the film seems rather final, I would love to see him return to the franchise in an extended role.

One trope that isn’t fully followed, even though Bond does seduce a widow on the day of her husbands funeral, is his more than casual use of the female lead as little more than a plaything.  This time Bond shows his travel companion a surprising amount of respect, even letting her sleep off a drinking binge upon learning about the death of her father.   Portrayed by Lea Seydoux, Madeleine Swann, is the child of someone from Bond’s past and one that can certainly take care of herself.  She is tough, capable and one who knows exactly what she wants at all times. Unfortunately the producers felt in necessary to have the two sleep together even though the twenty second scene was one that could have been left out with no ill effect to the plot. I guess this was a way to give Bond a real love interest since the death of Vesper but it felt a little forced.

Of note, this is the first film since Goldeneye without Dame Judi Dench in the role of M. After her death in Skyfall, the role of M shifted to Gareth Mallory played by Ralph Fiennes.  Fiennes does a terrific job as the new leader of MI-6 as he attempts to rescue the organization from being dissolved by the very government it is sworn to protect.  Channeling elements of Bernard Lee, I really hope he returns in the role for Bond 25. We even get more of Ben Wishaw in the role of the Quartermaster, ‘Q’ and I desperately hope he returns in the followup as well. 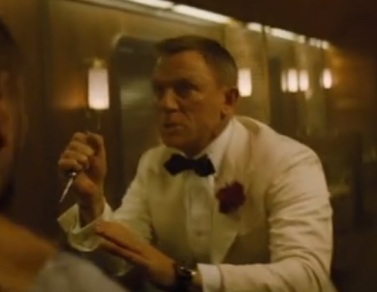 Bond himself is once again played by Daniel Craig and he holds nothing back in his fourth turn as the British Secret Agent.  While he is nearing the end of his time in the role, even approaching age 50, Craig still dominates the screen in every way.  He is tough, clever and certainly not someone you would want to find yourself up against.   This is Bond back in his prime. No longer the freshman agent we saw in Casino Royale, this Bond is no longer just the blunt instrument we saw but one that is a well honed blade that knows what needs to be done.

Every Bond film has a theme song and this one is certainly no exception. Unfortunately it is the absolute weakest of the franchise thus far.  Performed by Sam Smith this entry is pretty weak compared to the previous Craig films and really feels out of place.  Thankfully there is a such thing as a fast forward button when watching at home.

While it does telegraph it’s every move, the film itself is a fun one.  Setting aside the layered tropes and the obvious story elements, it is a blast to watch. Although I would love for him to return to the role, in many ways this would work as a perfect end to Craig’s time as Bond, completing the story arc that started with his first encounter with Vesper Lynd in Casino Royale.

Once again, this is available in the Daniel Craig four film set or alone.   I highly recommend the set as it has three solid entries into the Bond Franchise and is a great value.

Well, that ends our adventures with James Bond 007.  You can bet we will cover the newest in the franchise when it finally hits theaters.   Until then, be sure to join us next week with a new installment of Key Movies Of My Life. What will it be?  Well, that would be telling…

oh, here is the trailer: