Diving into Jadzia’s past and into the struggles of Nog, originally airing on June 12,1995,  This is Facets

Dax undergoes the Trill ritual of zhian’tara in which she gets to meet her previous hosts in the flesh.  Meanwhile, Nog and Rom prepare for Nog’s entry into the Academy. 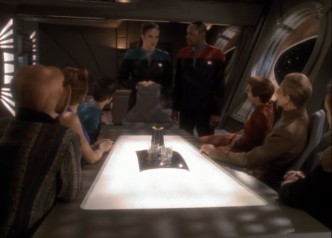 After inviting the operations crew as well as Quark and Leeta to her quarters, Dax informs her friends that she is going to undergo the zhian’tara ritual and she asks them if they would be willing to loan her their bodies to be used by her previous hosts in the ritual.  Explaining the situation, she tells the group that they will be temporary hosts to her previous hosts, allowing her to meet and interact with her past selves. Sisko informs the group that he has already volunteered to host Joran, the serial killer host, so no one needs to worry.   After convincing Quark to join in, Dax informs Kira that she will be the first and that they will start the next day.

The next day, Dax transfers Leela into Kira with the help of a Guardian.  Immediately it is obvious that Leela has taken over the body of Kira and the two begin to talk with one another about life.  It is here that Dax learns she has the same mannerisms that Leela does as she too holds her hands behind her back.

The process continues with O’Brien embodying Tobin (who keeps apologizing), Leeta who embodies Emony and Quark who discovers that he is embodying Audrid, a motherly woman who clearly loves her children. Soon it comes to Julian who embodies Torias (and can’t stop eating) and finally, it is time for Joran to take over Sisko.

Sisko and Odo work together to set up Joran in a holding cel so that the killer does not escape.  In full Hannibal Lecter mode, Joran speaks to Jadzia in a low, creepy tone.  He immediately asks about her music and complements her as being a pretty girl.  Before long he begins to verbally attack Jadzia claiming that she is over her head and not deserving of being a joined trill.   He tries to convince her to lower the force field and when he begins to hurt Sisko, she convinces the Commander to take over.  It is soon apparent that Joran has them both duped and, the moment the force field comes down he attacks.  After a brief fight, Sisko regains control thanking Jadzia for not breaking any bones. 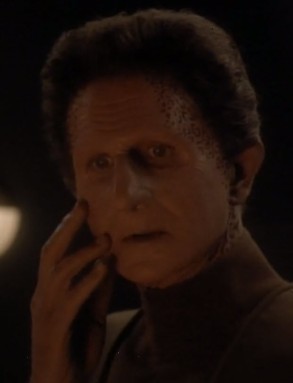 When it finally comes to Curzon, Jadzia is scared of what her previous host has to say.  This time, it is Odo who volunteers for the ritual and, as soon as the ritual commences, Odo’s face changes to look just like Curzon.  Almost immediately, Curzon visits his old friend Ben Sisko where he explains that he is a blend of both Odo and Curzon in a way that the Guardian was unprepared for. Complementing his beard, Curzodo asks about the Commanders date with Kasidy Yates causing Ben to quickly usher them both from the Commanders quarters.

At Quarks bar, Curzodo frightens Quark with a kiss to his head and begins talking with Jadzia.  Jadzia begins to ask about her time as an initiate but Curzodo manages to evade the talk with a game of tongo.  After being kicked out of the bar, Curzodo and Jadzia retreat to Odo’s office where she presses him about her initiation into the joining.  There she asks why he didn’t object on her reinstatement into the program.  He claims that he felt sorry for her and she realizes that this means that he never respected her.  She is worried that when they rejoin, she will not respect herself.  He casually informs her that Curzon and Odo have no intention to rejoin with Jadzia and plan to remain as they are.

Taking their concerns to the Guardian, Jadzia makes it clear she has no intention to try to get Curzodo back.  Talking with Ben about the issue, he soon convinces her that she needs to confront Curzodo as the man has always been very manipulative in his past. Visiting Curzodo, he finally reveals that he had fallen in love with her causing him to reject her from the program.  He washed her out of the program due to this and later felt guilty about his actions.  When she reapplied, he was relieved and only wanted her to have what was rightfully hers.  He doesn’t want to rejoin with her as he is afraid that she will feel the shame of his forbidden love and treachery.  She tells him that she loves him too as only a joined trill can.

Later, Odo joins Dax in Quarks bar and apologizes for his behavior in his joining with Curzon.    It is because of Odo, that she has a deeper connection to herself and the memories of her past hosts. She thanks him for what he has done and his memories of being a changeling seeing these as a special gift for her.

Story B: The Education of Nog

Nog is at the helm of a shuttle being pursued by a group of Cardassian warships when Jake appears knocking in the window.  It soon becomes clear that he is practicing for his entrance exam and is very cross with his friend.  Jake assures his friend that he has everything he needs to make it into the academy and that they young Ferengi need not worry.

Soon O’Brien sets up the stress reaction test surprising him with a simulation of Ops in DS9.  Nog is dismayed to learn that all of his practice was for naught and begins the simulation.  Meanwhile in the bar, Rom is nervous about his sons exam entry revealing to Quark that he had a cadets uniform made for Nog.

Nog is upset that he failed the entrance exam and Quark informs him that there will always be a place at the bar for him. Rom, realizing what his brother has done, confronts Quark about his treachery.  It appears that Quark reconfigured the holosuites so that the young man would fail, preventing him from getting into the academy.  Rom has already informed Sisko of Quarks actions and informs his brother that, should Quark do this again, Rom will burn down the bar.

Having passed the exam, Rom introduces Nog to the group dressed in his new homemade uniform.  O’Brien realizes that in just a few years, he will have to call Nog sir.

This is a great exploration of who Jadzia is as a character.  It is not often that a show gets a chance to break down the facets of a characters personality so literally, but boy did DS9 pull it off.

For the first time, we really get a sense of who Jadzia Dax is outside of just the Starfleet Officer. This is a young woman who is, at her core, a determined and ready for anything.  We learned earlier that it was her first rejection from the program that got her out of her shell but since she was accepted back, she has had a nagging feeling as to why she wasn’t rejected a second time. 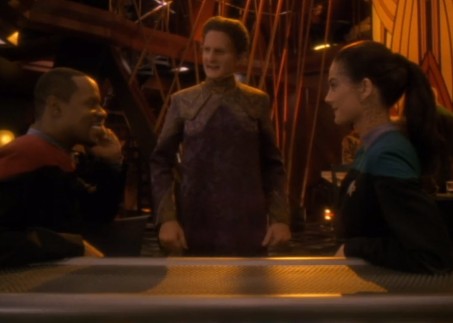 For humans self doubt is something we live with every day but imagine being mentally bound to someone who you believe didn’t believe in you?  This is what Jadzia has been dealing with ever since being joined to the same Symbiont of the man who originally rejected her application.  To her, she has had to live with the constant doubt that she wasn’t good enough and that doubt keeps coming back in the form of Curzon’s memories. It is only when she learns that he was in love with her that she realizes that, with his memories of that love, she is able to expel those self doubts and move on.  Too bad it’s not that easy in real life huh? 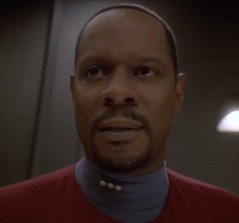 We also get an intimate look into how much each Trill is affected by the memories and experiences of each hosts.  From simple gestures to physiological motivations, each hosts adds to the layers of depth creating a tapestry of personalities that each host gets to experience.  It is a wonder that any of the Trill are able to keep all of their lives separate, but I guess that is what the initiate program is really all about, being sure that the Symbiont itself is in good hands.  I love how each of the actors portrayed the hosts they were bound to, especially Nana Visitor and Avery Brooks.  Both of these actors did an amazing job becoming other people entirely without the benefit of makeup or special effects.  Each of them literally became their new characters for the short time they were on screen and it was incredible.

That being said, Rene Auberjonois did a wonderful job as Curzodo.  In many ways I kind of wanted him to remain like this for a few episodes as it would have really been a cool way to introduce a new character without changing much.  Regardless, this episode gives Odo himself a new perspective on being a solid that no other changeling can imagine.  Kinda makes you wonder if maybe the Trill and the Changelings couldn’t benefit from meeting up some day.

As for Nog,  this is a monumental moment for the young Ferengi.  While his journey to become a Star Fleet officer has been relegated mostly to the side stories, this episode marks a milestone for the young man.  In many ways, this side story acts as a counterpoint to Jadzia’s struggles.  With Jadzia having self doubt over something she already has, Nog is having doubt over something he desperately wants.  I guess no matter what side of the coin you are on, you tend to have the same troubles.

Thanks for reading the Retro TV Review,  I look forward to discussing the rest of the series with you, one episode at a time every Monday, Wednesday and Friday!  Next Review: The Adversary