I have always been a sucker for a good trailer breakdown as it gives us a chance to look at the short form art in small digestible fragments. These fragments allow for speculation and insight into what could be and what really is. Since my early speculations as to what this series could be when it was first announced, (and it seems some of those predictions were pretty close) I have anxiously awaited the first footage of this highly anticipated series. Sorry this one has taken SOOOOOO long to post, I mean you would think I would have had this one done months ago. So here it is, The Picard Trailer Breakdown!

To be clear, I have no foreknowledge of this film. This is just a speculation based on fandom and gleanings from the trailer. Only time will tell if these speculations are right. As always, please feel free to chime in in the comments below.

Let’s start with the full trailer itself.

We open on a view of the classic Picard Vineyard and the homestead where Picard’s brother and Nephew both passed away during the events of Generations. There is a glimpse of what could be the barn that burned on the left but that could also just be part of the vineyard itself. In the opening we hear a woman asking Picard if he has ‘ever been a stranger to himself’.

After answering ‘many many times’ we see Jean Luc open a jar containing his communicator pin (at the :14 mark) as seen in the films. I guess these are not issued gear and he was allowed to keep his.

Picard then mentions that nearly 20 years prior Commander Data sacrificed himself to save Captain Picard. This sets the series approximately 20 years after Star Trek Nemesis. Interestingly, Data was completely blown up in Nemesis so the body seen at the :20 mark can only be either B4 or the deactivated Lore.

Picard indicates that the past few years have been difficult and we see him walking his dog, who has been confirmed as being named ‘Number One’ at the :25 mark.

Soon after we meet the woman who pulls Picard out of retirement. At the :40 mark she confronts Picard asking if he knows her and that she feels safe around him. There is great speculation as to who she is but IMDB only lists her as Dahj played by Isa Briones. Interestingly she is only listed as being in 8 of the 10 episodes.

We then see him return to Starfleet where he visits an Admiral to discuss the matter. At the :43 mark you will notice something interesting… 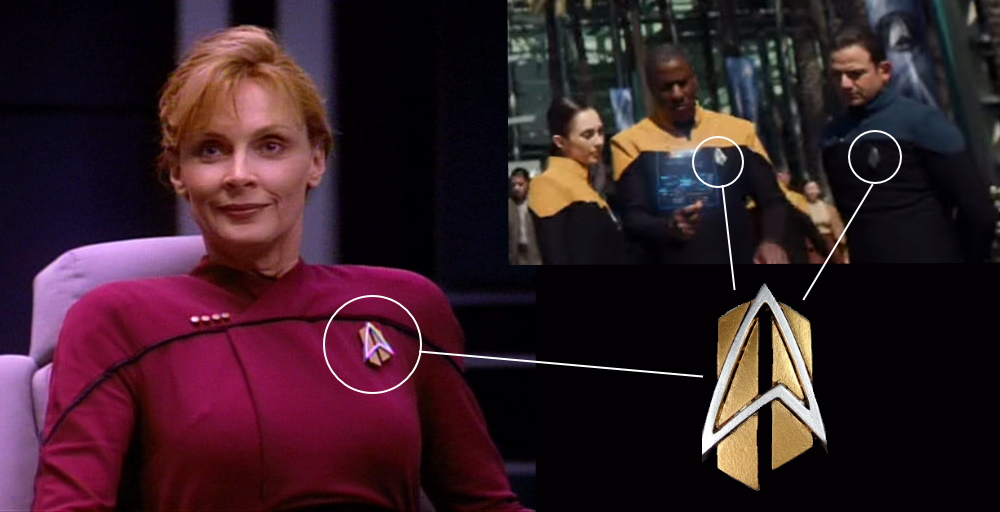 Notice both the coat he has on resembles the classic TNG uniform but also the combadges that the people on the right are wearing…. Look familiar?

As Picard informs the currently nameless Admiral about the girl, he witnesses her fighting what look like members of Section 31. Needless to say, she holds her own well.

Then at the 1:02 mark We see flashes of interesting bits as someone tells Picard that they think he has forgotten who he is.

a fleet approaching a red planet… Maybe the Romulan refugees are invading Vulcan?

The classic Picard Day Banner from the TNG series

Someone being operated on under very tight security. Who could that be?

An interesting facility that has gone 5843 days (or 16 earth years) without an assimilation. Note the rather Romulan looking guard…

We then see Dahj and another inmate in that facility under guard. Is Dahj a de-assimilated Borg drone?

After the flashes we see Picard return to Varidian 3 where the Enterprise D was lost and Captain Kirk died. Is he visiting the grave of his old ship or the classic Captain?

At the 1:10 mark we get flashes of a crew after someone mentions that he ‘can’t do it alone’ and Picard ‘needs help’. In quick succession we get:

Santiago Cabrera as Cristobal Rios (who kinda has a Riker vibe going.)

Allison Pill as Dr Agnes Jurati who kinda reminds me of a young Gena Davis in this shot.

Michelle Hurd as Raffi Musiker. Interestingly this is when the speaker says ‘ you will need protection’. Is this the ships heavy?

Then there is an interesting one, Evan Evagora as Elnor. He kinda looks like a Samurai Vulcan. I dig it.

At the 1:16 mark The speaker is revealed to be a nameless Romulan. I am not sure of the actor but he looks very familiar.

and then at 1:33 some one refers to Dahj as ‘The Destroyer with a massive image of a Borg Cube that is either being built, repaired or stripped for parts.

Then something crazy happens. At the 1:37 mark we get our first big crossover character. Seven of Nine portrayed again by none other than Jeri Ryan. I have to say, Seven has come a long way since the end of Voyager but this certainly confirms one big theory, this is a season with a HUGE Borg focus. Interestingly, she speaks to Picard as if they have known each other for a while. Have they had a past encounter?

Then, after another quick succession of flashes and then Picard gives his famous line: Engage which leads to…

…the first look at the shows logo. Notice the font used in ‘Star Trek’ though. Not the TNG font but the classic franchise font instead. Interesting choice indeed. Through this we learn that the series will air in early 2020 instead of later this year as expected.

However there is one last surprise.

at the 1:58 mark we see Brent Spiner himself is back in at least one moment as Commander Data. I can’t tell you how much a squee’d at this very moment. Is it a flashback, a holodeck simulation, a conversation with B4 infused with Data’s data? Only time will tell..

Okay, so lets break down what we know.

Picard has retired from Star Fleet after some ‘tragedy’ as mentioned in the first teaser trailer. Seeing that this happened after an event where he ‘led them from the Darkness’ some 15 years earlier and that the number of days since the last assimilation is around 16 years, could his departure from Star Fleet have been due to an accident with the Borg? What we don’t know is how long it was between Nemesis and the event that created the Kelvin Timeline. In the IDW comic prequel to JJ Abrams Trek film, it is established that Spock Prime was assisted by Picard and crew in the Vulcan’s attempt to save Romulus. His failure could have something to do with Picards departure from Star Fleet as well.

We know that the young woman that seeks Picard out is involved with the Borg in some way. How, we don’t know yet but she was being held by Romulans so this does involve them to some degree. This Romulan presence reinforces the destruction of Romulus as a potential part of the narrative.

We know that Seven of Nine is involved somehow, as is Data. Are their parts mere moments or touches to add to the continuity or are they important to the greater story? I guess we will find out early next year?

The girl is an escapee from a Romulan program to use former Drones as guinea pigs. She escapes and seeks out Picard as she ‘remembers’ him as Locutus. He realizes that he must now save the very people he once tried to destroy but is having issues believing in himself due to whatever the tragedy was that caused him to leave Star Fleet in the first place. I think this will be a redemption story that will ultimately tell the final tale of our intrepid Captain. There is a tag line that states ‘The End is Only The Beginning’ could that mean they are using Picard as a way to introduce a whole new cast to bring us into a whole new series? Honestly, that would be a good way to create a connection with the new characters.

One thing I know for sure, I will be sure to have CBS All Access when this series finally drops. I can’t wait!!!

If you have any thoughts on this new series please share them in the comments below.

Well, until early 2020…(or the next trailer drops)

If you would like to read our reviews please check out the rest of the Key Movies Of My Life that comes out every Thursday.

As always, please feel free to comment below and share your experiences as well. If you just happened by, tell me what you think! Don’t Forget To Follow me if you like the blog!