More trouble from across the Looking Glass in the episode that originally aired on April 22,1996.  This is Shattered Mirror.

Ben Sisko is lured into the Mirror Universe when Jake is kidnapped so that the Captain will help the newly formed resistance build their very own Defiant. 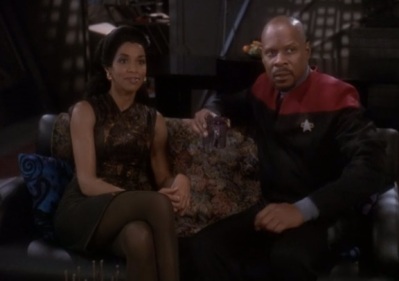 Jake finds himself missing his friend Nog when Odo arrives reminding the young writer of his old friend.  After being chased off by Quark,  Jake returns to his quarters where he is shocked to find his father sitting with…his mother?!

Everything is clarified when Ben and Jennifer explain the situation.  It seems that Jennifer is there to deliver the news that the Resistance has driven the Cardassian/Klingon alliance off of Terok Nor.  Leaving to deal with an Ambassador, Ben leaves the two alone to ‘catch up’, however, when Captain Sisko returns he is shocked to find that Jake and Mirror Jennifer are missing and a small device has been left behind.

Sisko decides to pay a visit to the Mirror Universe with O’Brien and Kira in tow but soon finds that only he is beamed over to the other universe.  There he is greeted by Miles ‘Smiley’ O’Brien who quickly disarms the Captain and informs Ben of their plans. It seems that in his last visit, Smiley stole plans for the Defiant and they have already built their own version.  Smiley indicates that they need help with the ship and neither Ben nor Jake will be allowed to leave until Captain Sisko helps to fix the issues. Unfortunately they only have a few days before the Cardassian/Klingon Alliance arrives. 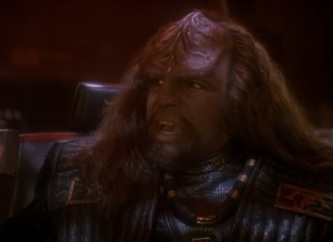 Ben reunites with his son (who is visiting Mirror Nog at Quarks Bar) and the Captain has words with Mirror Jennifer.  Ben insists that she leave his son alone but soon finds it difficult to separate the two.

As the invasion fleet approaches we are introduced to the new leader of the Klingon Armada, Regent Worf. On his ship he has words with Mirror Garak and explains that they are heading to Terok Nor to destroy everything. They have learned that the rebels are building a new ship and they now need to increase their timeline before the ship is completed.

Back on Terok Nor, Ben is working on the Defiant where he discovers Intendant Kira has been captured and is being tortured by Mirror Bashir.  Ben stops the torture but it is clear that nothing is going to change.  Sisko retreats to his quarters where he finds Jennifer and Jake discussing dinner, it seems the two have bonded and Ben fears that this will make things harder in the long run.  Smiley arrives with bad news, it seems the Klingons will be there sooner than expected.  Mirror Bashir and Dax decide to take raiders out to delay the Regent and Ben has another idea, they should use the Intendant to help them defeat Regent Worf.   After some discussion, Kira gives him some information but Sisko is unsure if it is reliable or not.

It is not long before Nog frees the Intendant, citing that he owes her a debt for killing both Rom and Quark, allowing her to escape just as the Klingon fleet attacks. She, of course, kills him to prevent him from telling anyone about her escape. Just as Sisko and Jake are about to leave for home, Sisko agrees to take command of the ISS Defiant in order to help the rebels fend off the Regent’s attack.  Soon, unknown to Ben, Jake and Jennifer are captured by the newly freed Intendant who informs them that they will make a great gift for the Regent.    Attempting to protect Jake from Kira, Jennifer is shot and it is clear she is not going to make it.  Kira, learning that Jake is Sisko’s son, spares him as a message to his father.

The battle continues between the Defiant and the Klingon fleet with the Defiant inflicting heavy damage in the fight.  Ben Sisko quickly shows himself to be a formidable opponent to Regent Worf’s flagship and just when it looks bleak for the Defiant, Julian and Dax appear in their Raider.  Now with the odds balanced, Garak suggests that The Regent retreat rather than face defeat.  It seems that the Rebels have won this skirmish. Regent Worf is furious at the defeat and plans his revenge on The Intendant.

Back on Tarok Nor, Ben visits Jennifer in the infirmary where she is nearing death.  The Captain has to once again watch the love of his life die without the ability to do anything about it.

This one isn’t bad but it then again, at this point in the series I feel like they have played out the whole Mirror Universe shtick.  While it can be fun to show characters acting in significantly different ways to their regular universe counterparts, this kind of thing can really only be taken so far. 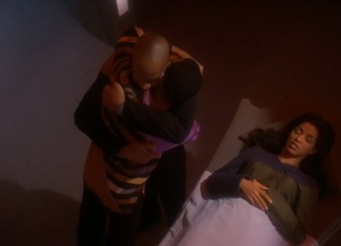 That being said, it is a rather important episode allowing Ben and Jake some closure regarding the death of their Jennifer Sisko.  Jake was too young to really have any time with his mother and Ben never really got a chance to say goodbye. While it seems a cruel twist of fate for them both to lose her all over again this allows for a closer bond between the two and for Ben to finally accept that it is time to move on.

One thing that really bothers me about this one though is that Ben actually allowed a Mirror Universe person to remain alone with his son without any regards to Jake’s safety.  This seems pretty lax even for someone who has been caught off guard by the fact that it is Jennifer but still, you would think he would have at least asked Odo to keep an eye on them. He literally has no reason to trust this woman but he does so without even a thought.  Plus, I find it hard to believe that parents on a star-base or a starship do not have some way to track their kids, or for that matter anyone on board.  I mean, by now, if some literally vanishes from from the station, the computer should immediately inform Ops that this person has vanished in an unauthorized means.  Think of all the issues they could have prevented!

All in all, this is a fun episode but it feel that the Mirror Universe has been played out for a bit.  Thankfully it won’t be until next season until we get another visit through the looking glass.

Thanks for reading the Retro TV Review,  I look forward to discussing the rest of the series with you, one episode at a time every Monday, Wednesday and Friday!  Next Review: The Muse