Comic book films have become the norm for Hollywood these days. It seems that there is a new film being released almost on a monthly basis these days ranging from strange independent iterations of lesser known properties to major blockbusters that you find yourself scheduling your life around.  In the plethora of Comic Book inspired films there are rarely films that you find yourself thinking about days later, those that choose to be different in their presentation, story, or just style opting instead to try to copy the successful formula presented by the clear blockbuster winners in this genre.

Despite multiple attempts in the recent past, DC comics has yet to really nail down a universe spanning series to rival those of their chief rival in film and comics books.  Interestingly it is when they attempt to do nothing but tell a good story with no intent to start a franchise that they find success and that success is in the form of a Joker.

The film itself is indeed an origin story but told from a very unique perspective.  As a lifelong fan of the DC Universe, I always appreciated the fact that the character of The Joker had a rather ambiguous history.  From stories of being a failed comedian to even possibly being related to Batman himself, he has always remained an enigmatic figure in Batman’s rouges gallery.  What made him so interesting is that his origin was never really important, what was important was that he was the opposite to Batman himself, with goals that never needed to be understood, only stopped.

Joker the film, however, takes Batman out of the equation and asks a simple question.  How could anyone actually become someone as insane as The Joker in the comics?  What could drive someone to be so determined to create chaos in our world without caring if anyone is hurt in the process? In asking these questions, filmmaker Todd Philips manages to create a truly original character using the bones of what has come before.

While the film manages to answer these questions and more, the film itself is even more than that, it is an exploration of both violence and mental illness done in a way that is both entertaining and disturbing sometimes simultaneously.  In the film we see Joaquin Phoenix as Arthur Fleck, a failure at life who’s one duty left is to care for his ailing mother Penny (played by Francis Conroy of American Horror Story fame). It is through her delusions that Arthur begins to piece together a version of the truth that begins to take a toll on his sanity, one that was tenuous to begin with.   After a fateful event on a subway, however, Arthur begins to find that the citizens of the damaged Gotham City have taken notice of him albeit via his persona as a murderous clown.

I wont get into any details as to avoid spoilers for you but this is a multilayered and rich story that merely uses the DC comics characters and environments to tell it’s own unique story.  This is a story that could literally have been stripped of it’s serial numbers and placed in any other city with any other characters and would have been a strong one of on it’s own.  The beauty of this film is that, by using Gotham City and it’s cast of non-superhero characters it places this take in a city that everyone is familiar with, giving any viewer a sense of comfort and familiarity walking into the film.  However, the film quickly strips away that comfort in showing viewers an all too real place that may eventually become the playground of a certain costumed vigilante.

Visually, the film takes it’s cues from visionaries like Francis Ford Coppola and Stanley Kubrick.  Todd Phillips knows his film and his style and manages to make a movie that is both visually and emotionally stunning.  From the 70’s style opening credits to the dramatic ending, there is not a moment of the film that feels forced or out of place.  Todd creates a world for his actors to play in and play they do.

Joaquin Phoenix does an incredible job channeling his own truly unique take of the crowned prince of crime.  Interestingly he is very careful not to call himself The Joker instead choosing to use the name sans the ‘The’ indicating that he is indeed his own version of Joker. Supporting him in his outstanding performance is Robert De Niro playing Murray Franklin (a comedian Arthur admires) as well as Zazie Beetz as Sophie Dumond (a woman Arthur has an infatuation for).   As they interact with Arthur/Joker, we are soon forced to wonder what is real and what is in Arthurs mind as Joaquin dances around our brains convincing us that anything can be imagined at any given moment.

One of the most outstanding characters in the film is one that you never actually see but instead hear.  Performed by Hildur Gudnadottir, the score to Joker is one of the most riveting I have encountered. Combined with the rather inspired soundtrack, her composition enhances some of the most intense moments of the film while also instilling a sense of anxiety throughout.  Not since Dunkirk have I been so amazed of the use of a soundtrack as an unseen character and I have to say, Huldur’s presence can be felt throughout the film. 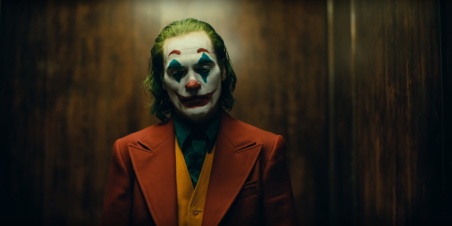 To say this film is intense is an understatement.  This is a deep and visceral look into the mind of insanity.  It is the modern version of Falling Down but without any redemptive qualities for the main character.  Joker is a dark film and one that demands multiple viewings.  Be warned, it is not for kids and, should you take one, be ready to have a deep discussion about mental illness and violence with them soon after.  This is a film that stands alone but does so with a statement about how easy it is to fall into the cracks of our shattering reality.  If you like films that have a deeper meaning and make you think, go see Joker, if you want a popcorn film like that of a traditional Superhero film, this is not for you.

In a deck of cards Jokers are usually wild cards, cards that can take the form of any that you need depending on the situation.  It is because of it’s nature that many leave it out of various cards games like that of Black Jack or Poker but, in the case of the DCU, it seems the Joker card is just what they needed. Personally, I think it is one of Warner’s best attempts to do something new with one of their most iconic characters, let’s just hope they don’t see this as a sign to just make dark films about every character in their library.