Kira gets a chance to shine in an episode that originally aired on January 6,1997 This is The Darkness and The Light.

Someone is killing off Kira’s old Resistance friends and they may be after her next.

During a Vedek ceremony one of the Vedeks is killed when a disrupter blast erupts from a candle.

On the station, Kira is being chastised by Doctor Bashir for not taking her medicine when Odo informs her that Latha Mabrin has been killed while participating in a Vedek Ceremony.  She is sad to hear of his death acknowledging that the man had changed in recent years.  Upon arriving to her quarters, she is shocked to find a message with an image of Mabrin with a voice stating ‘That’s One’.

Odo begins his investigation immediately but there does not appear to be any connection outside of their mutual participation in the Resistance together.  Odo increases security in order to prevent any harm to Kira.  The next morning in the replomat, Kira runs into O’Brien who assures her that there is nothing she can do about this death.  Their breakfast is interrupted when a message comes in for Kira from a scrambled source.  Kira is shocked to find her friend Trentin Fala is on the line and requests that they speak privately.  Assuring Fala that no one will trace her call, Kira talks to her friend and learns that Fala believes someone is out to kill her.  Kira offers to have Worf and Jadzia retrieve her friend to keep her safe. 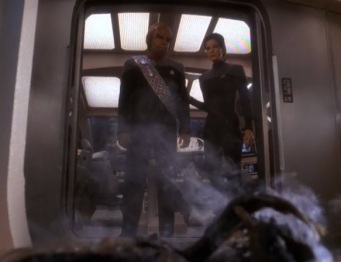 Worf and Jadzia head to Bajor and attempt to beam Fala from the planet only to find something wrong with the signal resulting in the brutal death of Kira’s friend.  Back on the Station, Kira pays her respects to her friend and informs Sisko that, while Fala was not an official member of the Resistance she helped them with information from her position.  Only insiders knew of her existence and now she too was dead.

Heading to the Bajoran Temple on DS9, Kira hears a voice saying ‘That’s Two’ on a pad that Quark ‘found’ in a shipment of Saurian brandy.  Reporting the evidence to Odo, the Security room is suddenly hacked and an image of a 3rd victim appears on the screen with a voice claiming ‘That’s Three’.  Odo suggests that she return to her quarters and rest while they search for the latest victim and she begrudging obliges agreeing to an escort to protect her. 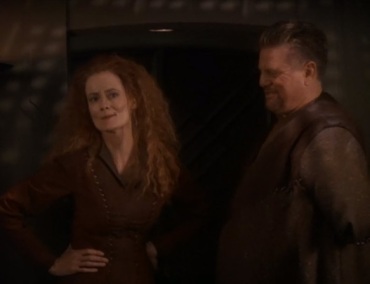 As soon as she arrives she begins hearing noises in the night and discovers two of her former members of her resistance cell sneaking around.  Lupaza and Furel inform Kira that they are there to protect her and beamed into her quarters to be of assistance.  The two inform Kira that, once she finds out who is doing this, she only needs to point the way and they will take care of him. Kira reluctantly agrees and her friend give her a gift of Makara Herbs.   Kira lets them stay in the O’Brien’s quarters while Keiko and Molly are away just before the two nearly kill Chief O’Brien by mistake.

The next day, Odo informs Captain Sisko of the evidence.  It seems this killer has a personal stake and wants to make a point to Major Kira. In Ops, Dax tries to decrypt the messages with Nog indicating that the voice seems artificial.  Nog determines that the voice is Bajoran and they soon discover that the voice being used is Kira’s.  Suddenly an explosion is detected in O’Brien’s quarters with a hull breach that has killed everyone inside.  Kira rushes to the room, fighting her way there only to collapse in the corridor.

In the infirmary, Julian informs Kira of what happened.  She is saddened to learn that Lupaza and Furel were killed in the blast but Miles was spared.  Kira is devastated at the loss and tells Odo about her two friend and what they meant to her.  Odo tells Kira that someone used a Hunter Probe to track down and kill her friends.  With Five down, the list is narrowing and Odo has a list of twenty five people who may be responsible for the deaths. Odo promises Kira that he will find the culprit no matter what.

Kira initiates an emergency transport to the security office and downloads the list of names for herself and beams herself to a runabout.  Odo realizes what has happened and informs Worf and Sisko of the situation.  Preparing the defiant to pursue her, Sisko and team get ready to track down their crewmate.

Tracking down her last suspect, Kira finds a Cardassian named Silaran Prin living near the Demilitarized Zone.  Beaming down she is stunned by Prin and soon awakes to find herself restrained in a chair.   Prin begins to describe her situation narrating her fear and trepidation.  Prin threatens her and tells Kira that she is the murderer not him.  He demands that she feel guilty for her actions and informs her that he was an innocent.  He was not a soldier but a servant who was hurt as collateral damage (scarring one side of his body and face) in one of her attacks.  He justifies his attacks by claiming only the Guilty have died and, since she is pregnant, he will kill her but save the child.

Pulling a medical table over, he begins to conduct the procedure with a laser scalpel.  At the last moment Kira asks for a sedative knowing that the Makara Herbs she has been taking will prevent the sedatives from working.  At the last minute, she overcomes Prin and kills him with her phaser. Sisko, Odo and Julian arrive soon after and find Kira in a state of shock.  She leaves with them knowing that she was indeed guilty of some of the collateral damage that Prin accused her of.

As a stand alone episode this is one of the darkest and most fascinating in a while.  While it does not do much in terms of plot development for the overarching story it manages to provide Kira with a strong episode that focused entirely on her and her past.

We have all known about Kira’s time in the Bajoran Resistance during the Occupation. As a freedom fighter, Kira has had to make many tough decisions sometimes even being forced to kill indiscriminately for the greater good.  Much like Odo faced in the recent episode Things Past, sometimes the sins of the Past do come back to haunt you and, in this case it was a Cardassian that was nothing more than collateral Damage.

Interestingly enough, Unlike Odo’s guilt over sentencing innocent Bajorans to death, Kira felt little guilt over the deaths of innocent Cardassians and the maiming of Silaran Prin.  From her point of view none of the Cardassians should have been on Bajor to begin with so they are all guilty.  While that may seem like a rather harsh point of view we have to keep in mind that she was a very young girl when the Cardassians took over. At 17 she joined the Shakaar resistance cell and would find herself in a baptism by fire as she fought against the oppressive government.

Kira has since realized that not all Cardassians are the enemy any longer and even has Cardassians that she is friendly with. However, there is a part of Kira that will never look at a Cardassian as anything other than an oppressive viper. While she has grown as a character there are some aspects of her that will never change, or at least not any time soon.

Overall, this is a great dark story that really sheds some light into how Kira feels about her time in the resistance and her justifications for her actions during that time period.  It also shows that, even pregnant, this is not a warrior you want to tangle with. 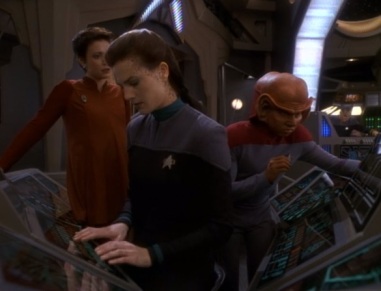 Thanks for reading the Retro TV Review,  I look forward to discussing the rest of the series with you, one episode at a time every Monday, Wednesday and Friday!  Next Review: The Begotten