‘We Have Engaged The Borg.’ No other sentence invoked such emotion in a tv series like this.  Since the being introduced to them in the episode Q Who,  they have been an imposing threat in the back of our minds all season long.  Only being referenced occasionally, they have finally started their assault on the Alpha Quadrant.  Originally airing on  June 18,1990 this is The Best of Both Worlds.

The Borg invasion has begun and the Federation face a threat that they have not fully prepared for.  Standing on the front lines the Enterprise must help defend the Alpha Quadrant even if it means losing one of their own.

Please note, there is a minor B story concerning Riker and his pending promotion but we will skip that for this breakdown to focus on the meat of the story.  You will find details in the ‘Is it a Good Episode’ segment.

Responding to a distress signal, Riker and his away team discover an entire outpost scooped from the ground.  Their greatest fears may have become a reality, The Borg could have reached the Alpha Quadrant. Lt. Commander Shelby and Admiral Hanson visit rendezvous with the Enterprise to determine if the Borg have, indeed, returned.   Shelby is from Starfleet Tactical and has been preparing for this invasion for the past year.  The next day, during an away mission, Shelby confirms everyone’s greatest fears, the Borg are indeed in Federation Space.

Preparations begin on the ship but it seems that all upgrades needed would take 18-24 months to complete.  They are far from ready.  Admiral Hanson contacts them and tells them that a Borg ship has been spotted and may have overtaken one of their own.  They head to the last known location in order to intercept the Borg vessel.  As they near, they find themselves, once again, face to face with a Borg Cube.   Picard sends out a subspace message to Admiral Hanson. ‘We Have Engaged The Borg.’

The Borg ship hails the Enterprise and asks directly for Picard. They inform him that the Enterprise will stand down and lower their shields or be destroyed.  After a brief battle,  Picard takes the Enterprise into a nearby Nebula that will hide their readings from the Borg.

That night, Picard takes a tour of the ship to get his head straight.  He ends up in Ten-Forward and speaks with Guinan.  She asks if he believes that this is a hopeless event as his touring the ship before a battle is a tradition of doomed Captains.  She tells him that this is not the end and, no matter what happens that day, Humanity will prevail.  The Borg then begin their attack, firing blindly into the Nebula with magnetically guided torpedoes. 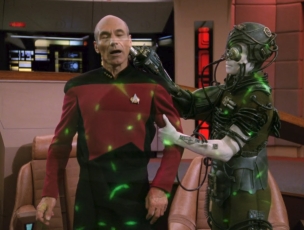 The Enterprise Jets past the Borg Cube in an attempt to get the advantage. The Borg attack causing the Enterprise’s shields to fail and Borg Drones begin to beam aboard the ship.   While the drones have the crew distracted, one appears and kidnaps Picard.  As soon as they have the Captain, the drones disperse and the Borg Cube discontinue the attack.  The Cube turn and head toward sector 001, Earth.

Aboard the Borg Cube, the Borg informs Picard that he has been chosen to be the voice of the Borg when communicating with the Federation.

As he is now in command of the ship, Riker assigns Shelby to mount a rescue mission and she takes Data, Worf and Crusher to accompany her.  As they explore the cube they begin to do damage throughout the ship to distract the drones and drop the Cube out of Warp before the cube can reach Earth.  As they work their way through they finally run into Picard only to find that he has been assimilated.

Successfully stopping the ship, the team return to the ship and inform Riker of the situation.  Picard is lost and is now the borg are preparing to head to Earth with him in command.  Riker prepares to fire a weapon on the Borg ship that could both destroy the ship and kill Picard himself but also cripple the Enterprise in the process.   Before they can fire on the Cube, they are contacted by the board ship.

They come face to face with Locutus of Borg, Picard is no more.

This is the first cliffhanger Season Finale episode for the series and it was a staggering one.  To set up the next season, not only in the middle of a battle but also with the Captain having become a villain himself was massive.  NO ONE expected an ending like this and, from my memory, no one knew that this was going to be a multi-part episode.  To call this episode good is an understatement,  this is STNG at it’s very finest.

The main narrative is about the Borg attack and in the process we get some fantastic character development for several characters and a deeper look into the Borg Collective. Just as before, they are a relentless race that are hellbent on assimilating any race that gets in their path.   This time however, they appear to have adapted in more than just technology but in tactics as well.   When they encounter the Enterprise, they inform the Federation Crew that they are to surrender as they are only interested in talking with Picard. We soon learn that they have changed their plan and their strategy now is to use a singular voice when threatening the Federation.  They feel that it would assist in their dominance over Humanity as it is clear that the Federation is not comfortable with talking to a hive mind.   Rather nice of our alien overlords, don’t you thing?

We get some additional character development as well,   not the least is Riker, who is, once again ,up for promotion.   Riker literally comes face to face with the future in the form of Lt Commander Shelby.  Shelby is a career officer who will stop at nothing to get the posting she believes she deserves.  She will step over anyone in her way and that includes our bearded 1st officer.  Riker sees much of himself in Shelby but only after Picard points this out.  In realizing this, he also comes to the realization that he has been using his time under Picard as somewhat of a crutch.  He is comfortable in his assignment on the Enterprise and seems to hope to take command of it himself one day.  Picard and Admiral Hanson alike only want the best for him and make sure he understands that there are only so many opportunities for advancement.  He has turned down four promotions so far and he many not get many more chances.   When Picard is taken from them, he is now placed in the chair that he doesn’t feel ready for with Commander Shelby vying for second in command.  This, of course, gets further explored in the next episode.

Finally we come to Picard who only wants the best for his crew.  He all but pushes Riker out of the nest to get his own command and really wants to see him succeed.  Like any leader, Picard recognizes that, while he may lose a perfect First Officer, the Federation is being kept from a fine Captain while Riker is aboard the Enterprise.  Picard is also seen to be ready for an untimely end as depicted in his meeting with Guinan.  Guinan questions his tour of the ship before the battle and, while Picard sees this as a tradition, he may be subconsciously preparing for defeat.  This tour really becomes ominous when he is captured by the Borg.  At this point we, as viewers, do not know if he will actually make it back alive.  They have killed of major characters before and, with Riker in command , it would not be surprising if the series continued with Shelby as his first officer. Of course, we know that this isn’t the case now but in 1990, this was a real possibility!

I vividly remember when this episode aired and it was nerve-racking.  Our beloved Picard was now a Borg and no one could imagine how they would get him back.  Much like now, theories and ideas swirled around the hallways among the geeks at school.  Picard was faking it, Picard wasn’t coming back, they were cancelling the series.  No one knew what to expect and that was part of the fun.   In that, we had to wait three months, an entire summer, to find out what was going to happen to the crew of the Enterprise D.

Guinan is given a little more background when she talks about her people being scattered after the Borg attacked her people.  Her long life has given her a unique perspective in the universe and she assures Picard that, even if it takes a millenia, Humanity will survive the Borg. 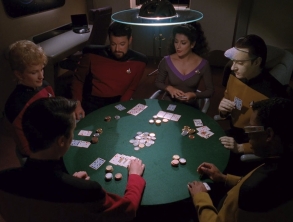 This is the first time we see an outsider playing poker with the senior staff.  Lt Commander Shelby ends up winning and this is just another bur in Riker’s side.  This is also the first time Wesley has been invited too as he is now an Ensign on the ship.

Riker gets a taste of his own medicine at one point when he prepares to lead an away mission to rescue Picard.  He is quickly reminded by Troi, that HE is now in command of the ship and it would be inappropriate to leave during a battle.

This episode marks the first time the phrase ‘Resistance Is Futile’ is used by the Borg.  It will go down as one of the most memorable phrases in Pop Culture History.

So that is it,  that is the end of Season Three of Star Trek The Next Generation.  I hope you have enjoyed this series with me so far and I look forward to discussing the rest of the series with you, one episode at a time every Monday, Wednesday and Friday!  Next Review: Season Four Premiere: The Best of Both Worlds Part 2…(We had to wait months when this first aired, you can wait a couple of days okay?)