With the Jem’Hadar bearing down on them, it looks like the end for our little station that could. Originally airing on February 17,1997 this is By Inferno’s Light.

and now the conclusion…

After the Dominion Fleet manages to break through to the Alpha Quadrant, Sisko and crew quickly learn the real reason behind the armada. Meanwhile, Worf and team must find a way to escape the Dominion Prison Camp.

With a Dominion invasion fleet pouring through the wormhole, DS9 prepares for the worst. Teamed up with Dukat’s captured Bird of Prey, Kira Commands the Defiant into battle. However, at the last minute, the Dominion fleet turns toward Cardassia only for Dukat to follow suit. It is soon discovered that Cardassia and The Dominion have reached an agreement and the Cardassians have joined the enemy.

On the Dominion Prison Camp, Worf and his fellow inmates begin their plan to escape. They soon learn that Cardassia has joined the Dominion when all Cardassians, with the exception of Garak, are to be freed. 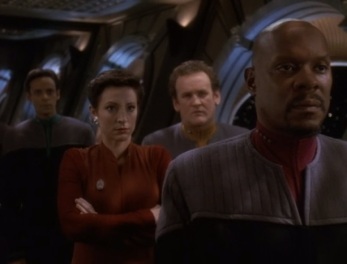 On the station, Sisko and the crew watch as Gul Dukat addresses the Cardassian people explaining why they have joined the Dominion and how it will help Cardassia. Knowing that this poses a future threat, Sisko is determined to figure out who was responsible for sabotaging the emitters on the station causing their mission to close the wormhole to fail. Changling-Julian casually mentions that they should begin blood screenings again in order to find the traitor. It seems he has a plan of his own.

Back in the Dominion Camp Worf is pulled from his holding cell by Jem’Hadar to participate in the fight training while Garak remains trapped in the wall working on the communications relay. As Worf fights his opponent, the team do all they can to free the Cardassian Tailor from his unpleasant confinement. After Worf succeeds in defeating the first Jem’Hadar warrior, the group continue their escape plans.

Kira and Ziyal discuss the turncoat nature of Ziyal’s father, Dukat, when a fleet of Klingon Ships arrive in need of assistance. Gowron meets with informing Captain Sisko that the Klingons plan to retreat and rebuilt on Qo’noS, but Sisko convinces Gowron to resign the Khitomer Accords and join forces against their enemies. Changling-Julian witnesses the exchange and sneaks aboard a shuttle to put plans into motion in order to end this reborn alliance.

Continuing to face Jem’Hadar in the fight training ring, Worf finds himself worse for wear. In the wall, Garak finds himself losing his mind as his claustrophobia begins to kick in. Soon, however, Garak finds he can no longer continue his mission to contact their shuttle when the lights go out on him. After Julian rescues the panicked Cardassian, it soon becomes clear that their plan to escape may have come to an end.

Hunting for the changling infiltrator, Sisko is contacted by the new head of the Cardassian Government, Gul Dukat. Dukat informs Sisko that in order to save the Federation, Sisko must convince Starfleet to follow Cardassia in their move to join with the Dominion. Meanwhile, the rest of the crew find themselves working toward preparations for a possible invasion as they hunt for the changeling infiltrator.

In the Prison Camp, Garak returns to his mission impressing Gowron and Worf of his resolve. Worf soon finds himself facing the Jem’Hadar leader, Ikat’ika, in the ring knowing that this was the man who took Gowron’s eye. As the fight begins, Garak continues his work in the wall while Jem’Hadar soldiers burst in to locate the Cardassian. Not finding him, the warriors soon find one of their makeshift tools leading them to discover the hole they made in the wall. Just when things look bleak, the Breen soldier pulls one of the Jem’Hadar’s weapons and saves the group. Outside, in the ring, Worf continues his fight against the Jem’Hadar leader and, even though he is beaten, the Klingon refuses to yield. Knowing that it would be a dishonor to kill the Klingon, Ikat’ika yields the fight much to his Vorta master’s dismay. Just as the Vorta commands his mean to execute Worf and Ikat’ika, Garak manages to beam the crew aboard the runabout and make their escape. 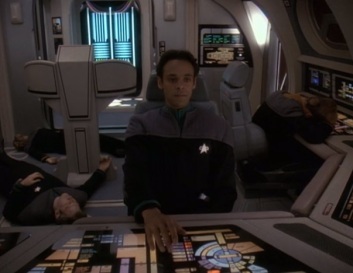 Sisko and crew begin to deploy their fleet of runabouts along side the Klingon fleet. Changeling-Julian has other plans however when he takes one of the runabouts, disabling the crew. Just as the fleet gets underway, Romulan ships decloak and ask to join. O’Brien is shocked that they can not make visual contact with the incoming Dominion fleet. Just as they begin to worry about the mysterious incoming fleet, the station is contacted by the real Bashir. Sisko realizes that Julian has been a shapeshifter this whole time and orders Kira to destroy his ship at all costs. Changeling-Julian is soon stopped from dropping a bomb into the Bajoran Sun but the Defiant stops him. The incoming Dominion fleet proves to be a decoy and the unified armada stands down.

Worf and the rest return to the station much to everyone’s joy. Sisko, seeing a chance to keep the peace with the Klingons makes an agreement to maintain the Federation/Klingon peace with General Martok placed as a permanent liaison aboard DS9. Dukat contacts Sisko and congratulates the Captain in his survival but tells Sisko that tomorrow may be another story.

In many ways this feels more like a season premiere than the one we got. Sure, Apocalypse Rising was a good episode that really setup a lot of what we see in this very episode but, as I said in it’s review, it wasn’t the best premiere we have seen. That being said, it seems that DS9 managed to sneak in a re-premiere with this and the last episodes setting up what is sure to be a great ride with the new status-quo.

This episode, paired with the part one ‘In Purgatory’s Shadow‘ makes for one of the best two hour episodes that have been seen in Star Trek since the Borg invasion at Wolf 359 in TNG’s Best of Both Worlds One and Two. Not only do the writers manage to set up what is to be a tremendous season and back half of the series, but they also take the time for us to get to know several of the characters better, including finally introducing the REAL General Martok. Trust me, you are going to find Martok to be one of your favorite characters in the coming seasons. This guy is pretty rad.

I particularly love the Dukat’s return to grace in this episode. This entire time we are led to believe that he has been dishonored and is now acting as a Space-Pirate (come on, you know that is where they were heading with that originally) when we discover that he has actually been colluding with the Dominion. The cool thing is, this aligns perfectly with his character and really should not have come as the surprise that it was. Now with Dukat in charge of Cardassia and aligned with the Dominion, you have to wonder what he has up his sleeves next.

In many ways, this two parter serves as a soft reset to get the series back on track. Before now we it was almost as if someone was playing an RPG that got out of hand. We had a Cardassian tyrant turned into a Pirate freedom fighter, we had an uneasy truce between Cardassia and Bajor, we managed to actually have Kai Winn accept Ben Sisko as The Emissary (which hasn’t been resolved yet but what a turn around!) and we also had the Federation and the Klingons no longer allies after such a big shift from the Original Series. I got the feeling that the DM of this game took a couple weeks off but the players still wanted to run the game without him. When the DM came back he found that the players had gone insane and had to find some way to reel them back in. Now that we are back on track, things are sure to get interesting.

Thanks for reading the Retro TV Review, I look forward to discussing the rest of the series with you, one episode at a time every Monday, Wednesday and Friday! Next Review: Doctor Bashir, I Presume