Kira faces her hardest trial as she struggles with both her past and her present in the episode that originally aired on April 14,1997.  This is Ties of Blood and Water.

Kira meets with Tekeny Ghemor to discuss a chance of gaining a foothold on Cardassia with the dissident movement, however Gul Dukat has other plans for Kira’s Cardassian friend. 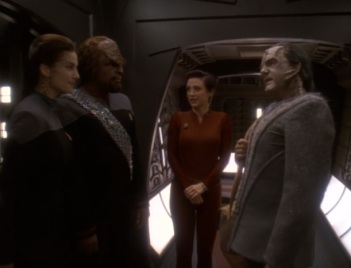 Kira, Dax and Worf welcome Tekeny Ghemor to the station to help further the dissident movement on Cardassia. Soon, however, Kira discovers that her adopted father has some bad news, he is terminally ill and does not expect to live long.

In the infirmary, Kira confirms Tekeny’s claims.  He has Yarim Fel Syndrome and, although there are some treatments Julian can attempt, it is unlikely he will survive. Meanwhile, Gul Dukat contacts Captain Sisko with a demand that Sisko hand over the traitor Tekeny Ghemor to the Dominion run Cardassian Government.  Sisko refuses informing Dukat that the Federation does not recognize the new Cardassian Government and they have no extradition treaty in place, Sisko refuses to comply and ends the transmission.

With the devastating news of his sickness confirmed, Kira and Tekeny discuss their lives since they last saw one another.  Kira informs Tekeny of Dukat’s attempt to extradite him and promises her friend that they will not let anyone take him away.  He informs Kira that he intends to enact the Cardassian tradition of Shri-tal where he will tell his family all of his secrets.  All she has to do is be his daughter one last time before he dies. 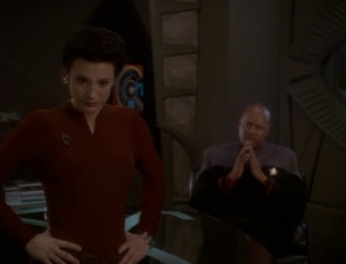 Kira informs Sisko of Tekeny’s request and Captain Sisko tells her that she should accept the dying man’s offer.  Knowing that she will be taking on a big responsibility, Kira flashes back to the death of her biological Father at the hands of the Cardassian Soldiers during the Occupation and realizes that she has no choice, she is all he has left in the universe.

Bashir sets up medical devices in Tekeny’s room so that the Cardassian can be as comfortable as possible in his last days.  As Kira and Tekeny begin their discussion, it is clear that this is going to be painful for the both of them as Tekeny continues to suffer greatly.  While they go through their long discussions, Kira remembers the final moments with her own father.

After debriefing Sisko, Kira is called back to Tekeny’s quarters where Julian informs her that her friend is not responding to the therapy any longer.  Tekeny asks Kira to continue their discussions as they are running out of time.  As Kira continues her talks with her friends, Gul Dukat arrives in a Dominion Ship and begins to threaten the station as he awaits an answer for extradition. 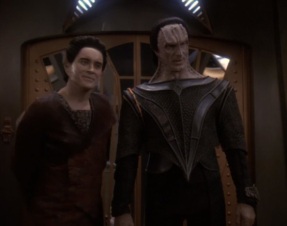 Sisko allows Dukat and Weyoun aboard the station to discuss their demands and discovers that Weyoun is a clone of the previous one he had encountered.  Dukat and Weyoun offer Tekeny amnesty to die on Cardassia. Dukat offers the dying man a chance to see his daughter, Illiana, and, despite this tempting offer, Tekeny refuses.  The two leave informing Kira and Tekeny that they will remain on DS9 for a few more days should he change is mind.

Kira continues to take care of her friend while gathering information from him.  Knowing that they are coming to an end, it is clear that Kira is feeling the weight of the situation. Before long she is visited by Dukat who attempts to convince the Major that Tekeny was responsible for a massacre on Bajor.  She refuses to play his ‘sick little games’ although she finds herself reading the material once Dukat leaves. 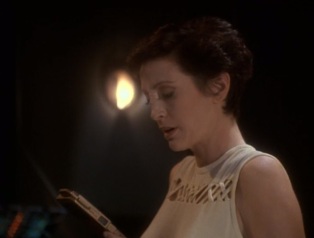 Back in Tekeny’s quarters she is clearly upset at her Cardassian friend.  She asks Tekeny about his participation in the massacre at the Kiessa Monastery and informs him that she is disgusted by him for hiding the facts from her.  Storming off she makes it clear that she has no intention to return. 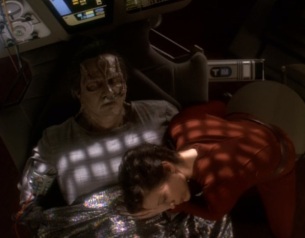 Outside of the Bajoran Temple, Odo questions Kira about her and Tekeny’s relationship deteriorating.  Odo informs Kira that she is deliberately separating herself from her friend using his participation as an excuse to not be there when he dies.  Later, in her quarters, Julian informs her that Tekeny will be dead within the hour and he is requesting the Major’s presence.  She refuses, despite Julian’s insistence, but he leaves believing that she is making a mistake. No one deserves to die alone.  Kira flashes back to her father’s death where she remembers that he died while she was on a mission to avenge his brutal attack.  Her father died calling her name but she was not there to be with him and has felt guilty ever since.  Knowing that she can not leave Tekeny to die alone as her father did, Kira arrives to be with him in the final moments of his life. 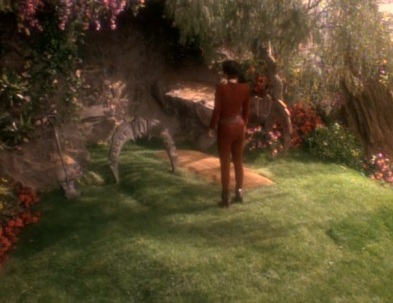 In the Infirmary, Julian registers Tekeny’s death and Kira acknowledges that while she gave him something he needed in the final moments of his life, Tekeny gave her closure as well.  She has felt guilty her whole life for rushing out to ‘avenge’ her fathers attack allowing her father to die alone.

With the news of Tekeny’s death, Dukat and Weyoun inform Sisko of their departure from the station.  Dukat informs Sisko that he will tell Cardassia of Tekeny’s last minute choice to embrace the new Dominion order on Cardassia and asks that his body be returned with them for a proper funeral.  Sisko informs them that he can not release the body as his funeral has already been arranged on Bajor.

Serving as a sequel to the episode Second Skin, this episode is a great Kira-centric one that really dives into the Major’s past while also giving us some of our first glimpses of Gul Dukat in his role as the leader of the Cardassian government. 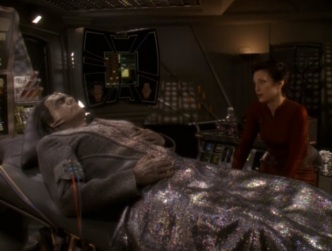 For Kira,  this is a huge moment in her life.  For years she has lied to herself about the guilt she felt not being present at her father’s passing.  Under the guise of ‘getting revenge for him’ she distanced herself from his death by diving deeper into her attacks on the Cardassians.  Since that moment, she has all but convinced herself that she had no choice and that it was not within her power to be there, even though she secretly knew that she had only avoided the inevitable.  Fast forward years later, and Kira is once again faced with a similar situation.

After the events of Second Skin, Kira found a kinship in Tekeny Ghemor.  This was a Cardassian who, even after serving in the Cardassian Military, saw that Cardassia could not survive without unifying with it’s neighbors, specifically Bajor.  It was through her experience in being used by Cardassia to expose Ghemor, and learning that he was one of the few ‘good-guys’ on Cardassia, that she found what was essentially a surrogate father in someone who would otherwise have been her enemy.  So, when it came to watch him die, all of the pain and denial she had for missing her own father’s death came back forcing her to find a way to hate this close friend in order to avoid facing a difficult situation. Interestingly enough, she was so desperate to distance herself that she fell for Dukat’s twisted view of her friend even though she knew that it would be a twisted version of reality. 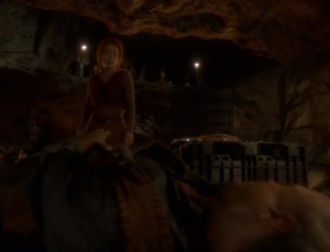 The thing that really makes this episode stand out is that it shows that this series is not afraid to give the characters depth and flaws. Any other series would have likely taken the easy route and shown their hero being the best person and sticking with the dying man through and through.  This episode really showed that, even though Kira puts on a strong persona, underneath she is still the frightened 12 year old girl who joined the Bajoran Resistance many years before.  In a way, Kira never got a chance to become the person she may have been having been tempered by the harsh hands of the Cardassian Occupation.  Ironically, Gul Dukat was somewhat responsible for Kira becoming the fierce warrior that she is today through his actions during the occupation ultimately creating his own nemesis.

Overall, directed by Avery Brooks, this is one of the best Kira-centric episodes of the series really diving into who and what Kira Nerys is as a person and as a Bajoran. 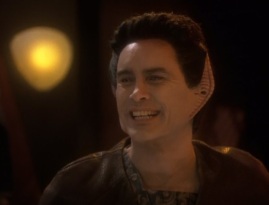