Are you more than the sum of your parts?   What if you lose a specific ability that you rely on to do your job? Can you recover?  What happens when an empath loses their powers that they rely on for counseling?  Find out in The Loss, originally airing on December 31, 1990.

As you may have guessed from the intro, Counselor Troi loses her abilities due to another event that is endangering the Enterprise itself.

The Enterprise picks up strange unexplained sensor ghosts but when they go away they discover that they are unable to go to warp due to a field collapse.  They soon find that they are being dragged along  at one-tenth impulse with no way to stop.

As this is occurring, Troi begins experiencing strange headaches and, after being examined by Crusher, she discovers that she has brain damage that has neutralized her empathic abilities, effectively blinding her.

Troi soon goes into a pity party and begins to act like she’s the only person who has ever experienced an impairment,  even though there is a blind guy on board!  I mean, for a counselor she really hams it up a bit. I get that she’s upset but when she lashes out against Riker for reaching out to her, she really goes off on him a bit.  Not long after she tenders her resignation with Picard but of course doesn’t want to accept it but he understands her situation.   It finally takes a talk with Guinan to get her to realize that she is good at her job even without her powers.  Guinan is a wily one.

Meanwhile, LaForge and Data figure out the problem, it seems they have been caught in the wake of two-dimensional beings who seem unaware of the predicament that the Enterprise is in.

Troi has to use her learned abilities as a psychiatrist to do the job, proving that she is more than the sum of her parts.  They of course, figure it all out, Troi gets her powers back and are safely on their way by the end, since I mean we do have three more seasons after this you know… 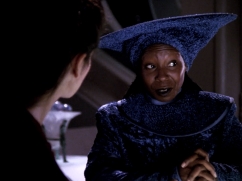 It is another forgettable one.  While it isn’t bad, it is a little melodramatic at times and seems a bit one-sided.   I  love Marina Sirtis, but she is dialed to 11 in this episode and that is not a good thing.   Instead of being convincing and relatable, she just comes off as spoiled and a little whiney for the most part.   Some of this may have been on purpose as Riker does call her out on her behavior, but it really doesn’t endear the audience to her plight, it just makes her a little more unlikable as far as I am concerned.

The side story is pretty interesting,  acknowledging the existence of a two and one-dimensional space with beings that live in those dimensions is fascinating on its own.   I have often wondered if there are creatures or things that interact with us without our knowledge.   Maybe this is where ghosts or other preternatural things come from?  Who knows, but the implications are limitless.

There really isn’t much here.  I mean not even the 2D or 1D universes are really mentioned again and that could have been a really cool thing to explore.

There is a moment at the beginning where Trois is counseling someone and reveals that she has a box that the woman thought was destroyed or some such.  My first thought was, wow, Troi is a tool for keeping that from this lady but for some reason it all works out.

I wish I had more to share but…I can’t sense anything.

Thanks for reading the Retro TV Review,  I look forward to discussing the rest of the series with you, one episode at a time every Monday, Wednesday and Friday!  Next Review: Data’s Day